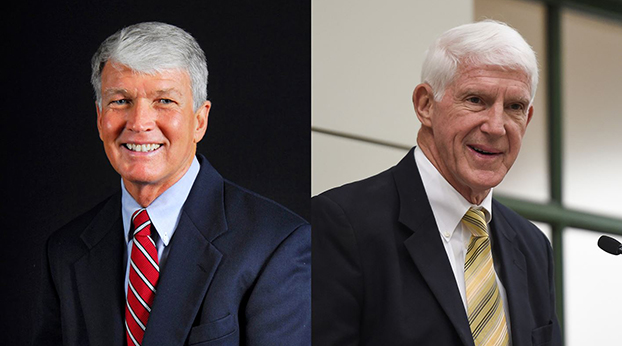 Les Steckel, left, is the new head coach of the Centre College football team. He is a former NLF coach. John Roush, a former Centre College president, will be the running backs coach.

Centre football announced the addition of two coaches joining the staff for the upcoming spring schedule, bringing in Les Steckel and John Roush – and their combined five decades of coaching experience – in what can be considered the silver lining to an otherwise frustrating year.

He was the offensive coordinator for the Titans when they reached Super Bowl XXXIV.

In the college ranks, Steckel has worked at a number of Division I programs and had 15 student-athletes selected in the first round of the NFL Draft.

Roush, a three-time Academic All-American for Ohio University, will be the Colonels’ running backs coach this season. He was an assistant at Miami (OH) following his career at Ohio, and from 1973-75 helped the Redhawks go 32-2-1 with three bowl wins and a top 25 ranking each year. Two of his running backs — Sherman Smith and Rob Carpenter —went on to play a combined 18 seasons in the NFL.

Roush also served more than two decades as the President of Centre College, retiring from his position this past summer.

“We are excited, which is an understatement, and grateful that these men have chosen to join our staff at Centre,” said head coach Andy Frye. “They bring a wealth of life and football experience. Most importantly, they are passionate about making our student-athletes and Centre football become the best that we can be in all areas. I have advised our players to get to know these men since they have so much to offer us on and off the field.”