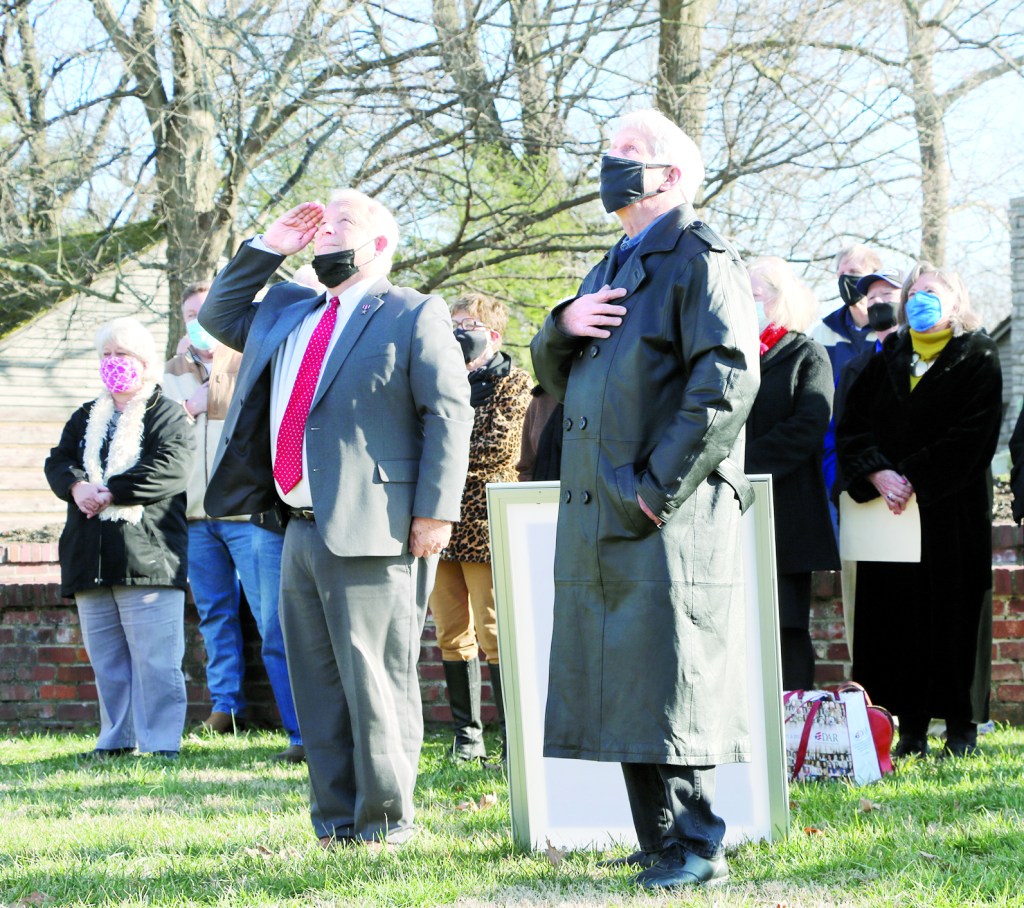 Boyle County Judge-Executive Howard Hunt and magistrate Tom Ellis respect the 15-stars and stripes flag as it was raised in Constitution Square Park on Wednesday afternoon. (Photo by Valarie Coomer)

The St. Asaph Chapter of the Daughters of the American Revolution presented a 15 stars and stripes flag, officially known as the Star Spangled Banner, to Boyle County’s Constitution Square Park Wednesday afternoon.

DAR Regent Judy Sieweke told the group who had gathered to watch the presentation that the flag was referred to as the Star Spangled Banner because it was the flag flying over Ft. McHenry during the War of 1812.

She said, “It was in 1814 when Francis Scott Key was on a boat in the harbor watching the battle unfold, wondering if the “flag was still there.”

She added that the next morning Key could see that the flag “was still there.”

“He was so inspired by the sight of the 15 stars and 15 stripes that he wrote a poem entitled ‘The Star Spangled Banner,’ that eventually became the words of our National Anthem.”

In addition, she explained that St. Asaph DAR wanted to honor the place where Kentucky, which was the 15th state admitted to the Union in 1792, was created when the Constitution of Kentucky was written right there at Constitution Square Park.

As she handed the flag to Boyle County Judge Executive Howard Hunt, Sieweke said, “It is St. Asaph’s pleasure today to present this Star Spangled Banner to this iconic destination for tourists, local citizens and school children, knowing that as we invest in the park, we invest in Danville’s and Kentucky’s economy, education and historic preservation.” 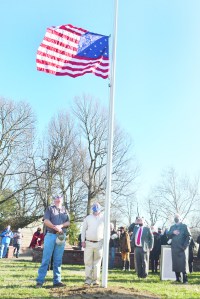 Les Jones, left and George Coomer stand in reverance after they raise the Star Spangled Banner at Constitution Square Park, as Aprile Hunt, not seen, sings the national anthem at the flag dedication ceremony Wednesday afternoon.