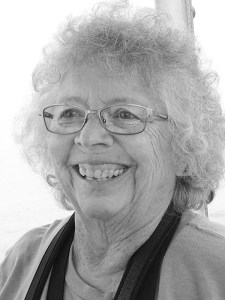 Virginia “Ginny” Eklund, age 77, died December 28, in her home from complications of cancer. She is survived by her husband, Neil, sons Andrew and Scott (Grace Lee), sister Kathleen Rouleau, brother-in-law Richard (Kristi), niece Kari Raykovich, grand-niece Lenore, and nephew Brian. Ginny graduated from Middlebury College and taught in southern Vermont before moving to Minneapolis to work in Christian Education. She met Neil at a square dance at the University of Minnesota. They married in 1969, moved to Nashville in 1970, and Danville in 1974. Ginny served Boyle County Schools as a teacher and school psychologist. Ginny was an ordained Episcopal deacon and served five parishes in the Diocese of Lexington, including Trinity Church, Danville.

Ginny had a particular concern for those who live in poverty. She helped Trinity begin a school supply program, and volunteered for Reading Camp both at the Domain and at Trinity Church. She also volunteered for Habitat for Humanity, helped churches raise funds for the Heifer Project and girls’ high school education in Kenya, and went on two mission trips to Nicaragua.

Ginny loved the natural world. She and Neil enjoyed camping and traveled widely. Her favorite travel experiences were a Safari to South Africa and seeing the Northern Lights in Alaska. She loved to be outside for the sunrise and to feed and watch birds in her backyard. Other hobbies included Stained glass and playing bridge.

In lieu of flowers, donations may be given to Trinity Church Outreach Fund or Happy Paws Spay/Neuter Clinic (DBCHS) In Danville.