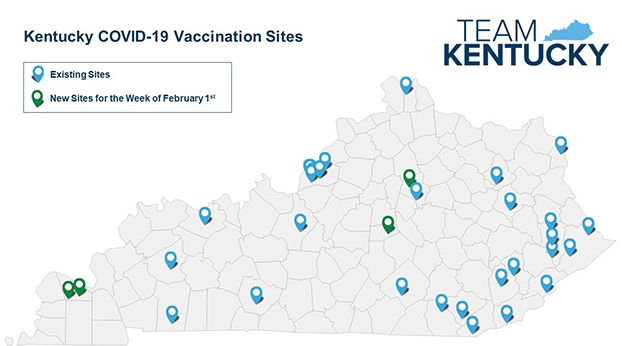 On a day that Kentucky set a record for deaths due to COVID-19, Gov. Andy Beshear announced the opening of the first four regional vaccination centers next week.

During a Thursday press conference, the governor announced that through the state’s partnership with Kroger Health, one will be located at the Kentucky Horse Park in Lexington.

The other three initial sites will be through partnerships with Ephraim McDowell Hospital in Danville, along with Western Baptist and Lourdes Mercy, both in Paducah.

“Beginning Feb. 1, 2021, the COVID-19 vaccination priority will be phase 1B, people ages 70 or older, and all vaccination sites are asked to prioritize this population until further notice,” Gov. Beshear said. “Other Kentuckians from phases 1A and 1B remain eligible for vaccination, and as vaccine quantities and available appointment times allow, persons in phase 1C may also be scheduled, to ensure each vaccination site administers 90% or more of all vaccine doses received within seven days of arrival.”

There is a new state website, vaccine.ky.gov, and a hotline, 855-598-2246, that can help Kentuckians determine if they are eligible to receive a vaccine, then helps them find a location in their region.  You can also sign up for a notification on when you will be eligible to get vaccinated.

More regional vaccination sites will be announced on each of the next two Thursdays, according to Beshear, making it a total of 35 locations.

He stressed that Kentucky, like other states, receives its vaccine doses from the federal government and due to limited supplies it will take time before everyone can be vaccinated. But, he said, everyone will get a turn.

Sixty-nine more deaths were confirmed as COVID-related on Thursday, bringing the total to 3,611.

The number of new cases reported to state public health officials was 2,947, making it 355,877 Kentuckians who have tested positive for the coronavirus since the first case was reported in the state on March 6.

“That doesn’t sound like good news, and it’s far too high,” Beshear said. “But this is the lowest Thursday we’ve had in four weeks.  Our numbers of Kentuckians hospitalized, currently in the ICU, and currently on a ventilator are all down compared to Wednesday.  Our current positivity rate is 9.04%, the fourth straight day under 10%, and I believe we have had almost a week, if not more, of that number going down.  Our trends are going in the right way.”

This was Gov. Beshear’s last scheduled live press briefing until Monday afternoon at 4.  However, his office is expected to report the daily numbers throughout the weekend.