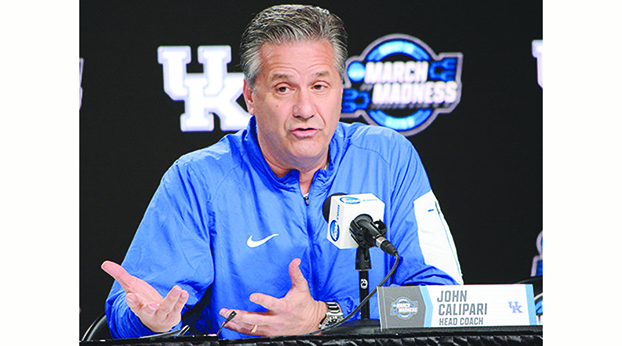 “We’re looking for singles and bunts,” he said. “I don’t need home runs. We’re not capable of hitting home runs. So let’s not. Let’s just do all the bunts and great screens and execution and everybody do their thing together.”

The Wildcats have lost four straight games for the second time this season and the third overall time in Calipari’s tenure as coach at Kentucky. Although Calipari’s squad has lost seven of their past eight games, the Wildcats showed signs of life in an 81-80 loss to Arkansas earlier this week. They play Auburn on Saturday at 1 p.m. in Rupp Arena.

“They’ve worked hard enough and had enough bad things happen to them,” Calipari said of his team. “They deserve something good to happen. But no one is giving it to you. You’ve got to take it. We got closer to taking it.”

Unlike some of the previous 13 losses this year that left Calipari scratching his head and frustrated at times, he wasn’t disappointed in Kentucky’s performance down the stretch against the Razorbacks.

“(It was) hard for me to be mad,” Calipari said. “I wanted to win the game. I’ll look at the stuff down the stretch to see how I feel. But the reality of it is the team fought and they executed and they threw daggers today. Finally, guys threw daggers.”

Kentucky freshman guard BJ Boston, who connected on a career-high four 3-pointers and scored 17 points against the Razorbacks, also liked the way the Wildcats finished in the loss to Arkansas.

“As long as we keep fighting that way and playing with each other we won’t lose,” he said. “That’s what I think.”

In addition to inching closer to a breakthrough, the Wildcats are starting to come together and form a bond, especially during times of adversity on the court. Led by freshman guard Devin Askew, the Wildcats huddled together down the stretch that kept the team bonded in the closing minutes earlier this week.

They also are becoming a tougher team, another sign the Wildcats are starting to turn the corner.

“Toughness is everything,” Boston said. “Coming up with every rebound, with every ball if we lose the ball, playing defense, guarding your man, hitting those dagger shots. Toughness is all of that.”

Like his team, Calipari plans on staying the course.