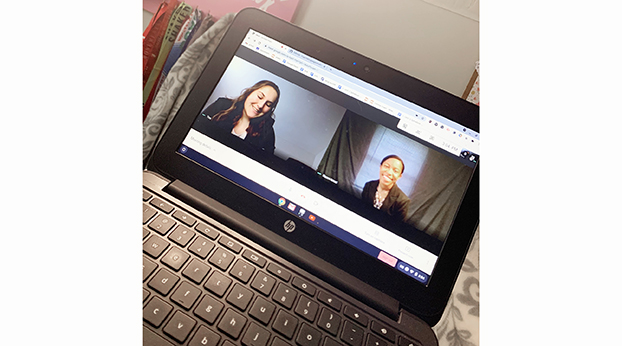 Emma Erwin, left and Naomi Isreal are improv partners who have had to practiced together via the internet. Photo submitted.

“We haven’t won as many trophies as in years past,” says Beth Marlowe, who along with Maggie Jenkins, coaches the state-bound Danville High School forensics team.  But in some ways, I think we’ve been more successful.”

Last week, 16 members of Danville’s “Speaking Admirals,” as they’re known, made it through rounds of the KHSSL regional tournament to qualify for the state tournament in March, with one member being named regional champion. In total, 51 schools and nearly 500 students from all over Kentucky competed for the chance to move on to the state level.

“I’m so proud of these kids,” says Marlowe, who has been involved with DHS forensics in some way, as parent, teacher, assistant coach, and now coach, for 20 years. “These kids have really risen to the challenge of competing this year against enormous odds.” 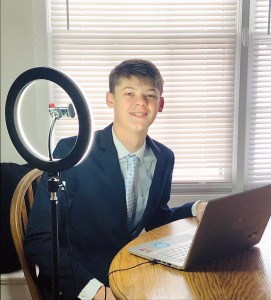 Forensics programs, like many live performance activities, school or otherwise, have been hard hit by COVID-19. Tournaments have been virtual since March 2020, and even with the national roll-out of the COVID-19 vaccine, that probably won’t change any time soon.

“I know virtual is the new normal for these kids,” Marlowe says. “But that doesn’t mean it’s easy.”

In fact, the learning curve has been steep for coaches and students alike as they’ve had to transition away from in-person competition and develop new skills.

“Competition days used to consist of getting the kids on a bus and making sure they have everything they need,” says Maggie Jenkins, who first competed as a freshman on the DHS Forensics team in 2004, returned during her college years to judge tournaments, and now teaches full-time in the Danville Independent School system, and coaches along with Marlowe, who also happens to be her mom. “Now there is so much more involved.” 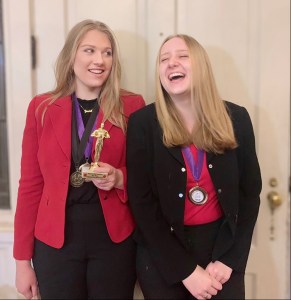 For each tournament, students must video their own performance piece at home — multiple pieces if the student participates in more than one event. They must then send the videos to Jenkins, who in turn must check for any visual, sound or performance issues, and ultimately upload all the videos to a shareable link for tournament judges to review, all by a strict deadline.

“Forensics is about expressing ourselves,” explains Jenkins. “And so, going virtual means that we (students and coaches) have to work doubly hard to get the same quality of performance that we took for granted before.”

“Most of these kids thrive on the live performance aspect of forensics, really feed off the audience and the competition,” Marlowe adds. “They love the energy that gets them hyped for the next round, and of course you don’t have that in a virtual competition.”

“Sometimes the videos just don’t capture the passion the way the kids want them to,” says Jenkins. “And that can be really hard.”

The Danville High School forensics team has a long and successful history, achieving recognition and acclaim at the state and national level for many years. More recently, however, there have been a few bumps in the road.

In 2019, long-time coach Steve Meadows, who had brought the program to new championship heights, retired, and around the same time, the school board voted to cut funding that helped cover tournament fees and travel expenses. And then the coronavirus hit. 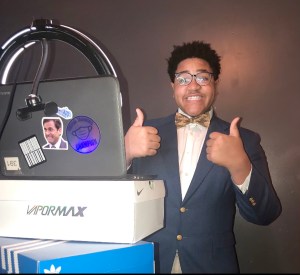 “In some ways, going virtual worked out for us because we simply didn’t have the money to attend every tournament in person,” Marlowe admits, adding that Danville High School Principal Thad Elmore has been “incredibly supportive” by paying for team T-shirts and other incidentals.

And many new team members have actually thrived in this brave new virtual world, while senior teammates have been able to step up more than ever as mentors.

“We put senior Jenna Haines together with freshman Grace Haines as an Improv Duo team,” says Marlowe. “Partly because they were sisters living in the same house, but also because we knew a more experienced team member would be able to help get a newbie ready.”

The coaches also paired another freshman, Demani Bell, who was eager to compete in Improv, with a senior, Ethan Scott, who said he’d be happy to show his new teammate the ropes virtually.

The pairings have paid off.

“The Haines sisters have finaled at most tournaments and they’ve won some. And Demani and Ethan won their first tournament a few weeks ago,” says Marlowe. “If both of those freshman had gone into a room with all the energy and nerves of competing live, they might not have been quite so successful.”

Virtual tournaments also work for team members who have the patience to film their pieces, watch them carefully, and re-record them as many times as it takes to get the result they want.

“Lila Ungs is that type of student,” Marlowe says.  “She just won the title of regional champion in Declamation, and had great scores with a prose piece I’d given her three days before her video was due.”

Recently, coaches and team members have been able to come together for safe, socially distanced meetings at The Bluebird Market, where Marlowe is manager.

“It’s felt so good to finally see them all in person,” Marlowe says. “Even with their masks on!”

The weekly meetings are part social, part work as the team preps for state, as well as for other upcoming tournaments like KESDA, the Catholic Forensics League, and the National Speech and Debate Association. And again, mentoring is key.

“Senior Britton Minks has stepped up as an incredible mentor and coach to freshman Jack Erwin,” says Marlowe. “Seeing Jack finally perform his storytelling piece in front of the whole group was fantastic, and seeing the pride on Britton’s face was beautiful. It just made my heart so happy!”

“I think all this has been especially tough on the seniors,” Jenkins says. “Basically, the pandemic has robbed our seniors of having that awesome final year before graduating and going their separate ways.”

“To be perfectly honest,” Marlowe says. “Maggie and I have spent more time talking to the kids about their anxieties and fears, with all they are going through, than ever before. It’s not always easy to focus on forensics when you’re young, living in the middle of a pandemic that shuts the whole world down, living through an election that seemed to divide everybody. Sometimes forensics has to take a back seat, and Maggie and I understand that. It’s been heartbreaking to go through all this with our students, but it’s also been such a huge honor.”

The important thing, Marlowe and Jenkins agree, is to always be there for every member of their team, and to also try to ensure that the tradition of Danville High School forensics continues into the future.

“We hear about schools from all over the state that are having the same issues we are,” Marlowe says. “We are all fighting to keep this activity alive. We are trying not to give up on something that has the potential to forever impact the lives of these students.”

“Ultimately, we’ll learn from this,” Jenkins says. “And we’ll keep getting better.”

“DHS forensics will come back even stronger next year,” adds Marlowe. “Just watch!”

DHS Forensics Team Members Who Qualified for State include:

Football coach supporters taking a closer look at the…