Capacity limits going to 60% for many; Beshear gives ‘optimistic’ report 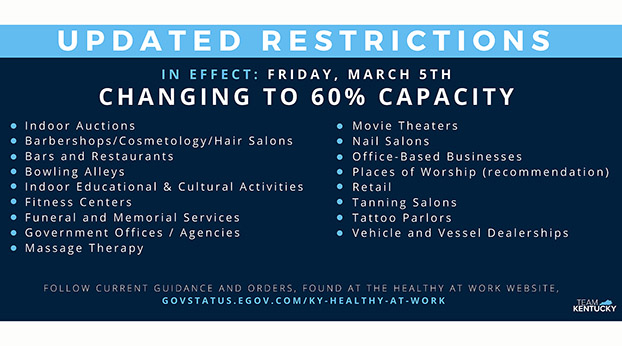 Following seven weeks of declining coronavirus cases and positive-test rates, along with an increasing supply of vaccines, Gov. Andy Beshear announced that many businesses would be able to increase their capacity limits, starting Friday, from the current 50% to 60%.

Beshear called the step a “watch and see” situation and called on Kentuckians to be flexible.

“With more aggressive variants out there, which are expected to become the dominant strains, we cannot stop masking, we cannot stop doing the things that we know that tamps down this virus,” he said at a news briefing. “If we do and the cases go back up, we have to be prepared to take the opposite step that we are taking today. And I won’t be hesitant about doing so.”

Businesses and venues that will be allowed to increase their capacities include bars, restaurants, government offices, retail stores, movie theaters, barber shops, hair salons and cosmetologists.
Beshear also said he plans to increase capacity of child-care centers to “regular group size” March 15 if positive trends continue.
Other states are allowing more capacity in restaurants and public gatherings despite dire warnings from health experts who say the pandemic is far from over, and moving too quickly could prolong it, The Associated Press reports.

Centers for Disease Control and Prevention Director Rochelle Walensky warned Americans and their leaders not to relax, saying she is “really worried about reports that more states are rolling back the exact public-health measures that we have recommended,” AP reports. Citing current figures, she said “We cannot be resigned to 70,000 cases a day and 2,000 daily deaths.”
Daily numbers: Beshear called Monday’s numbers “the most optimistic report I’ve been able to give you since the very beginning of the pandemic.”
He said the share of Kentuckians testing positive for the virus in the past seven days dropped below 5%, to 4.84%, the lowest its been since Oct. 18.
The World Health Organization and other health officials consider a below 5% to represent low transmission, but the WHO says it needs to be below 5% for two weeks before restrictions are eased.
Beshear reported 509 new coronavirus cases, the lowest daily figure in five months. The seven-day rolling average is 1,091, down three from yesterday.
Only 25 of the state’s 120 counties are in the “red zone” for counties with 25 cases per 100,000 people.
Kentucky’s new-case rate is the 11th highest in the nation, according to The New York Times. The state says the new-case rate over the last seven days is 20.52 per 100,000 people. Counties with double that rate are Russell, 42.2; Knox, 43.1; Clay, 45.9; Lyon, 57.4; Owsley, 58.2; Taylor, 61; and Caldwell, 240.
The Pennyrile District Health Department said an outbreak at the West Kentucky Correctional Complex in Lyon County was incorrectly attributed to Caldwell County because its mailing address is Fredonia, which is in Caldwell. The state Corrections Department report said 232 of the 253 active cases among inmates, and 19 of the 32 staff cases, are at the prison.

Hospital numbers remain stable, with 719 people hospitalized with Covid-19 (down 13 from yesterday); 180 in intensive care (down 7); and 82 of those on a ventilator (down 36, perhaps reflecting a reporting anomaly on Sunday). All of these numbers have been trending down.

Two of the state’s 10 hospital readiness regions are using at least 80% of their intensive care beds: Lake Cumberland, 98% and the easternmost region from Lee to Pike counties, 92%.
Vaccines: Beshear said Kentucky will get 36,500 doses of the single-dose Johnson & Johnson vaccine this week and will send it to local health departments and more than 130 independent pharmacies. This is the third vaccine authorized for emergency use against the coronavirus in the U.S.
“That is another victory and a closer step to winning this war against Covid-19,” he said.  “Like the other vaccines, it protects, almost eliminates, severe disease and the possibility of death.”

On NBC‘s “Meet the Press” Sunday, Dr. Anthony Fauci, the nation’s leading infectious-disease expert, urged Americans to take whatever vaccine is available to them when they are eligible. He said that of he were not vaccinated, he would take any of the three approved vaccines because they all provide strong protections from severe disease related to the virus.

Kentucky’s daily vaccine report shows 699,398 Kentuckians have received their first dose of either the Pfizer-BioNTech or Moderna vaccine. And with the addition of the Johnson & Johnson vaccine, Beshear said he expects that number to double in the next month.
On Monday, Kentucky opened up vaccinations to people in the 1C category, which includes all essential workers, people 60 and older, and anyone 16 and older with certain health conditions.
Beshear confirmed today that the 181 state prisoners who are 70 and older will be included in the 1C distribution of vaccines and that details were still being worked out on how to accomplish that.
Cabinet for Health and Family Services Inspector General Adam Mather said the federal long-term care vaccine program is wrapping up. He said the state would move to a “maintenance” program to ensure that new residents, new staff and reluctant residents and staff would be able to be vaccinated.
Deaths: The state added 15 more Kentuckians to its list of Covid-19 fatalities, all of them confirmed. That brings Kentucky’s death toll to 4,652. The 14-day death average is 25.8, up from 25.4 yesterday.
Beshear said deaths have been under-reported since mid-November because a busy state employee stopped comparing all death certificates that listed Covid-19 as a cause of death against deaths reported by health departments, Beshear said. He said the state has resumed these audits again, but it’s too early to guess how many deaths will be added. When Ohio discovered a similar problem, it added 4,000, The New York Times reported.
“I am committed to honoring all of those lost by making sure each is counted,” the governor said. “We can have no unknown loss and no unknown soldiers.”