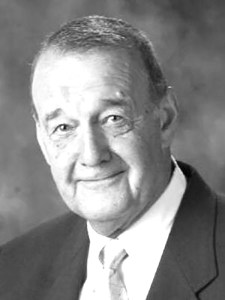 Hugh Francis Mahon of Danville, 80 years old, husband of Adria Young Mahon, died on March 17, St. Patrick’s Day. It was his favorite holiday. Born November 4, 1940, in Paterson, NJ, he was the son of the late Hugh and Grace Oliveri Mahon. In addition to his wife of 59 years, he is survived by his daughters, Colleen Mahon, Erin (Gordie) Shaw and Kathleen (Pete) Aplikowski; and his grandchildren: Sarah and Catherine LeMay; Alec (Madison) and Cameron McAfee; Adria and Flynn Calnon and Mitchell and Ethan Aplikowski. He is also survived by his sister, Matthia VanSoest and brother, Patrick.Hugh attended Fairleigh Dickinson University. He was the developer and co-owner of The Lock Box, a storage company in Danville, and a member of the Danville Planning and Zoning Committee. He was a real estate agent in NJ and KY and worked for many years as an appraiser for the Master Commissioner of Boyle County. Hugh was the drum major, instructor and director of The (Holy Name/Garfield) Cadets, an award-winning junior drum and bugle corps. He was also the drum major for the Paterson Cadets junior corps and two senior corps: the New York Skyliners and the Hawthorne Caballeros of Hawthorne, NJ. He was a founding member of Drum Corps International, the organizer of the United Organization of Junior Corps, marching instructor for multiple drum and bugle corps throughout the United States and Canada, and a judge for local and international competitions. Hugh was a charter member of the Halls of Fame of the Cadets and DCI. He also taught the Boyle County High School Color Guard for many years.

He was proudest of the fact that all three of his daughters are college graduates. Five of eight grandchildren have received college degrees, with three still in school. Hugh was known for his wit and wisdom. He was a mentor to many and a friend to all. In lieu of flowers, please consider a donation to Heritage Hospice. Remembrances may be mailed to the Mahon Family, PO Box 756, Danville, KY 40423. Visitation will be from 1-3 pm on Monday, March 22, at Stith Funeral Home, 318 W. Broadway in Danville. The online guestbook and our Hugs From Home program are available at www.stithcares.com.