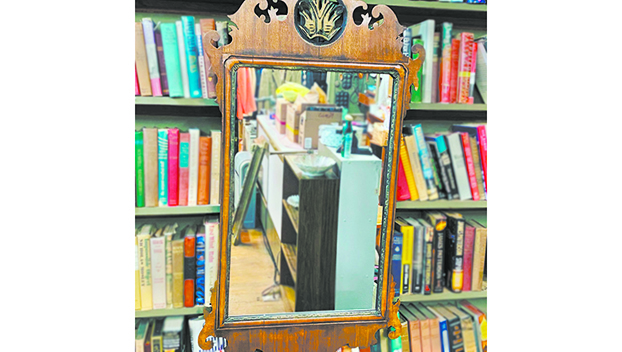 Question: Hi Jerry, I’m looking to sell my Milton Paul mirror. What do you think I can sell it for today? I bought if from him at his shop in Lexington in 1980. It’s in excellent condition. Thanks for looking at this for me.

Answer: You have a wonderful Milton Paul mirror. And for our readers who aren’t familiar with him, here is some of his amazing story.

Milton Paul, an African American, was a Lexington, Kentucky, cabinet maker who was active for more than 40 years. Born in Liberty, Kentucky in 1921, Paul

relocated, with his parents and sister to Lexington.  He got his start in the business by enrolling in a cabinet-making school that was part of Paul Lawrence Dunbar School. He worked for years doing repairs and restorations to antique furniture for Earl Brown, another Lexington African American, in his workshops.

Earl had long and strong ties to the Lexington antiques market working for some of the most well known know dealers in Central Kentucky.

In the 1950s, Milton was “discovered” by Marie Irvine. Marie was a successful antiques dealer working out of her home. She encouraged Mr. Paul to reproduce some Chippendale-style mirrors.

Milton submitted several examples and Marie quickly rejected them. According to the family, it took Milton 10 to 12 years to perfect his craft. But he succeeded and turned it into an art. In time, he began to reproduce mirrors for many dealers and decorators in Lexington and Central Kentucky.

Paul and his wife Amy, created a small, but successful, workshop on Paris Pike. It was said that Milton, a tall elegant man, worked and drank copious amounts of bourbon and loudly played opera music. They provided a home for and educated their children — six girls and three boys — with this scuffed knuckle and knocked together business.

Mr. Paul’s mirrors were heavily collected and even today are passed from one generation to the next. So much so that they rarely are encountered in the market. The only marks that you’ll find will be a simple “X” on the back. Many suspected, and wrongly, that he was illiterate. His son said that in the early days his father papered the backs of the mirrors and signed the paper, but many dealers, removed the paper, perhaps to pass it off as an older example. So in an effort to secretly sign his work he, simply, signed it with an “X.”

I love your mirror. But I have to say that based on the age of when you purchased it, that it’s not a fine and developed as his work should have been. He should have been in his prime at the time. But it has the customary “X” on the back and you’ve attached your own purchase label on the back, adding to its provenance.

As I’ve said before, the market for traditional items has softened somewhat. In this

condition, I think in a retail store this would be priced at $450. Thank you for sharing

Note: To promote clarity, I accepted this mirror on consignment, and as of this writing, it’s in my store.

Dear Abby: Fortunes change for homeless women, but not…