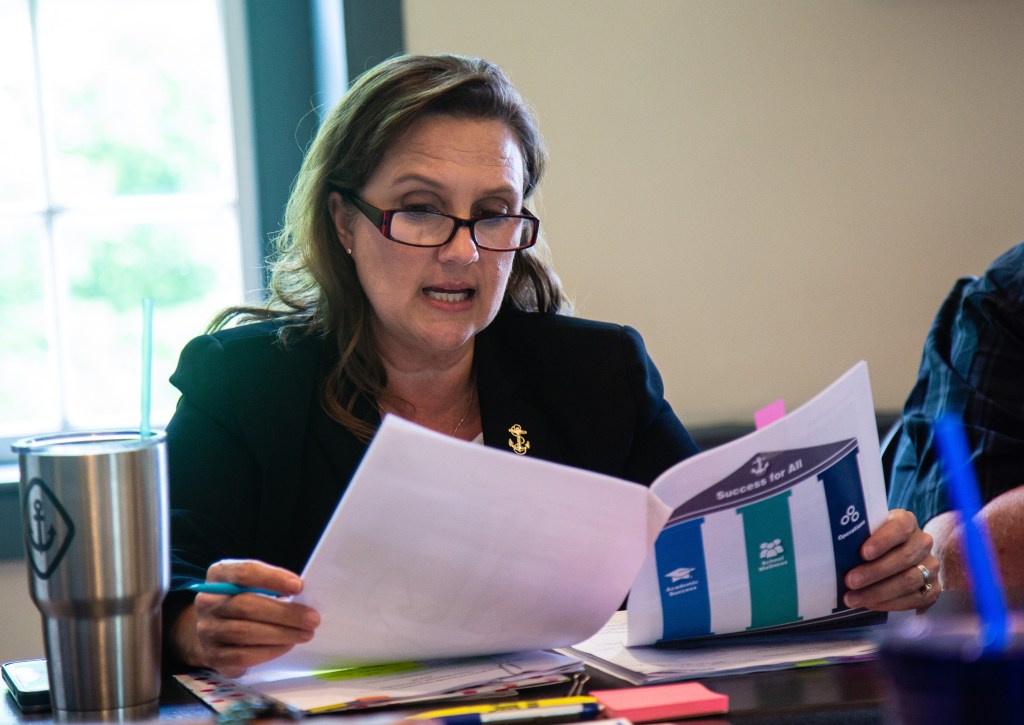 The Danville School District is in “great financial shape,” according to Board of Education Chair Steve Becker.

At last week’s board meeting Superintendent Dr. Tammy McDonald presented a one-page flier that compared the district’s 2018-’19 and 2019-’20 fiscal year-end financials so the public could see an overall picture of its finances.

“Spending overall in the district between those two years, we were down, which is where we want to be if we’re really looking at being mindful of our budget,” McDonald said.

However, “The sad part is our revenue is also down.” McDonald said revenue was down “predominantly” because of state cuts to public schools. “This has been a trend for the last 12 years…”

McDonald said the district’s revenue minus expenditures, “Basically what we saved as we’re trying to be more mindful of our funds,” increased by $1,110,408.

And payroll expenses were also cut.

“For two years in a row, our auditors have said that our payroll, percentage wise, it’s a little too high of the percentage of our overall budget … which we want to be…” she explained.

“Our auditors, of course, run the numbers when we have our yearly audit” and want to see the district’s payroll not go over 80% percent of its overall budget, McDonald said. The Kentucky Department of Education’s guidelines state that districts’ payroll stay between 74 to 78% of its over all budget, she added.

Two years ago, the district’s percentage of payroll was as high as 85%. However, after some staff cuts over the past two years, the district’s payroll is still about 83.5% of its budget, McDonald said.

“We have cut considerably over the last two years, as far as payroll goes. There has been a lot of positions that have been cut and we’ve distributed those duties to other individuals. It’s painful anytime you do that process.”

Becker added, “One thing we have to all realize, to drop from 85 to 83% is extraordinary.”

He said he’s looking at payroll dollars and “where monies are being made up. Overall spending is much less.”

Becker said he wants the administration to continue working to reduce the payroll. “But it’s really hard for you to ask a principal, or site-based council, don’t hire this person because they make too much money. Our decisions have not been made that way.” Comparing the salaries of veteran teachers to less experienced teachers, “Its a very tough decision,” Becker said. “Sometimes they have so much more to offer.”

And even though payroll costs were decreased, money spent on instruction increased by $749,067. Instruction dollars include everything from crayons to new computer software — anything that is used directly for educating students, McDonald said after the meeting.

According to the flier, “Danville Schools strives to be a good steward of finances. It is important that we use our funds with intention and carefulness. Although revenue is down, (e.g. state cuts) Danville Schools has decreased spending and payroll while increasing instructional funding and the general fund. Our main financial priority of the district is to protect the long-term interest of the Danville Schools and focus dollars on instruction and students’ needs.”

One questionable entry on the flier concerning the year-end cash balance, which caused the administration to update the one-pager, turned out to be a simple human error.

Osbourn told the board that this year’s February’s financial statement showed the district had more than $10 million in the bank.
Becker said, “Our instruction dollars are up. Our payroll dollars are down, and we’re able to keep a nice cash balance. A lot of people think that’s excessive.”

He explained, “The majority of money comes from taxes, and that doesn’t start happening until November. So we have to make sure that we can pay the bills and meet payroll, and that’s why we have $10 million, what they call ‘carryover.’”

Becker said, “That’s a very nice position to be in, because if something drastic were to happen,” such as a school building’s roof blowing off or a boiler breaks down, “you’re looking at thousands and thousands of dollars. Well, if we didn’t have our experts working on this and the due diligence that’s been paid going out and coming in, we wouldn’t be as good as financial shape as we’re in now. So I just want everybody to know, we are in great financial shape. We are not wasting money.”