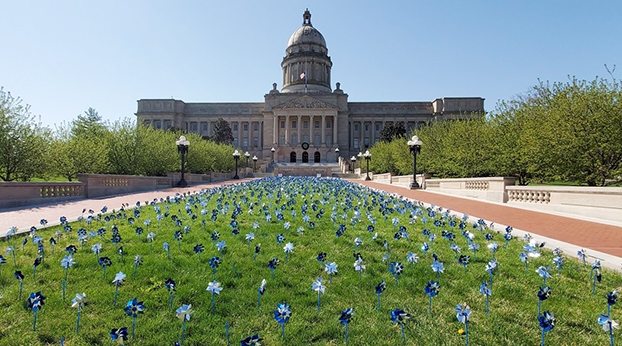 The initiative, in conjunction with the group called Prevent Child Abuse Kentucky, is called “Are They Good for Your Kids?” It calls upon parents and caregivers to consider the adult influences in the lives of their children and equips them with tips and resources to recognize and prevent Kentucky’s youth from being groomed for abuse.

Cameron said posters with the slogan will appear on the sides of city buses in Louisville, Lexington and Northern Kentucky. “To remind us as adults of our responsibility to keep Kentucky’s children safe. It’s a responsibility that we must continue to take seriously.”

He said part of the campaign will focus on addressing the growing danger of online grooming.

“We know that as children spend more time online, they are more likely to encounter predators posing as peers on social media, and on apps,” Cameron stated. “Child exploitation destroys lives and robs children of their innocence. We must do everything we can to ensure Kentuckians have happy and healthy childhoods.”

The campaign is being funded by a grant from the Kentucky Child Victims’ Trust Fund, administered by the Child Sexual Abuse and Exploitation Prevention Board, which is part of the Attorney General’s Office. The campaign aims to stop child abuse before it starts by arming every Kentucky adult with the information they need to prevent and identify predator grooming before it leads to child sexual abuse.

“Nearly 60% of child abuse victims never report exploitation, making it the most underreported form of maltreatment,” said Jill Seyfred, Executive Director of Prevent Child Abuse Kentucky. “Thanks to the support of the Child Victims’ Trust Fund, we have developed this campaign to raise awareness about the importance of carefully choosing who you allow to influence your children. The title of the campaign, ‘Are They Good for Your Kids?’ is the first question adults should ask when allowing someone else to care for their children.”

The resources provided by the “Are They Good for Your Kids?” campaign equips adults with tips to determine who should have access to your children and how to have age-appropriate conversations with your children about the dangers of grooming.

Seyfred says grooming a child for sexual abuse can take days, weeks, months or even years.

“It’s a deliberate action on the part of the perpetrator to gain the trust of either the child and/or the family,” she stated, and cited an example of how it can take place. “Sometimes children are not accustomed to receiving presents or accolades. When they get that confidence from a stranger, it helps build trust, and over time a perpetrator builds on that trust.”

She added, it’s important for parents to know the warning signs.

Learn more by going to https://www.pcaky.org/AreTheyGood4YourKids.