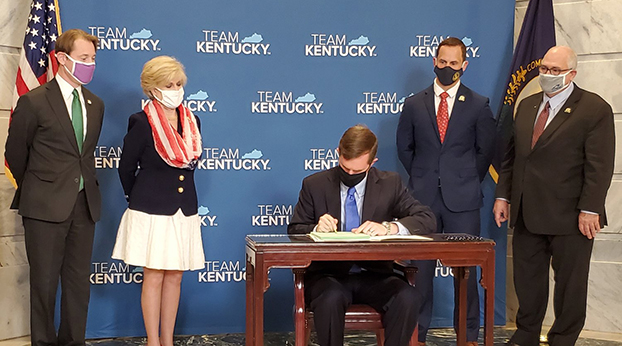 House Bill 574, the election reform bill, resulted from a joint effort between Beshear, a Democrat, and Secretary of State Michael Adams, a Republican, during the 2020 elections in finding solutions to problems caused by the COVID-19 pandemic.

Beshear called this a good day.

“When much of the country has put in more restrictive laws, Kentucky legislators and Kentucky leaders were able to come together to stand up for democracy, and to expand the opportunity for people to vote,” he said.

The governor saluted Adams and the bill’s sponsors for their efforts. “We have created a model for the nation. When sometimes people said the eyes of the nation were on Kentucky, we showed them the very best, ensuring that not only all our citizens, and a record number of citizens in the General Election could vote, but that they could do so safely, without catching this virus.”

Adams also gave Beshear kudos for his efforts in the process, especially in putting together the plan for the 2020 elections.

“That resulted in the most secure and accessible elections Kentucky has ever had,” he said. “This year, the General Assembly has followed suit, reaching across party lines to enact the most significant reform of our election system since 1891. This is a triumph of policy and process.”

Provisions of the bill include:
• Creating three days of early in-person voting, including a Saturday, with no excuse required.

• Enhancing the ability of state election officials to remove nonresident voters from the voter rolls.

• Keeping the online voter portal, so absentee balloting is fully transparent both to voters and election officials.

• Permitting counties to establish vote centers, where any voter in the county may vote regardless of precinct.

• Retaining the signature cure process, so absentee voters whose signatures have changed over time have a chance to prove identity and have their ballots counted.

The other four bills signed on Wednesday deal with how the General Assembly allocated the federal dollars sent to the state due to the enactment by Congress of the American Rescue Plan Act, or ARPA, earlier this year, which sent $2.4 billion to Kentucky.

“This agreement will improve our state’s critical infrastructure and will help create more than 14,500 jobs in Kentucky,” Beshear stated. “That’s 14,500 jobs at a time when we want to sprint out of this pandemic instead of stumbling.”

Reliable, high-speed internet access has proven critical to achieving successes in education, health care outcomes, and economic development. Currently, the state’s broadband infrastructure does not extend to every community, resulting in unequal opportunities among Kentuckians. House Bill 320 provides $300 million to the Broadband Deployment Fund to begin addressing unserved and underserved communities. With a required matching investment, it will mean a $600 million total for the project.

Under provisions of HB 382, $140 million will be earmarked for full-day kindergarten in Kentucky, $575 million will be used to help repay Kentucky’s unemployment insurance fund loan from the federal government, and $3.3 million to reopen the State Medical Examiner’s office in Northern Kentucky and pay for the first year of operations.

HB 556 provides $127 million for school construction and $75 million for renovation costs for local vocational schools, which will support building the well-trained local workforce of the future.

The $127 million allocated for renovating and replacing school facilities will accelerate the much-needed improvements of schools that have been designated as the highest-ranked on the Department of Education’s Facilities Inventory and Classification System report.

It also includes $20 million to fund rural hospitals in the state.
Senate Bill 36 allocates $250 million in grant funds to provide crucial upgrades to water and sewer infrastructure in communities across the commonwealth.

Gov. Beshear says he still has about ten bills left on his desk and expects to make additional announcements on Friday in Louisville. “We’re trying to make determinations on both their legality and the policy.”