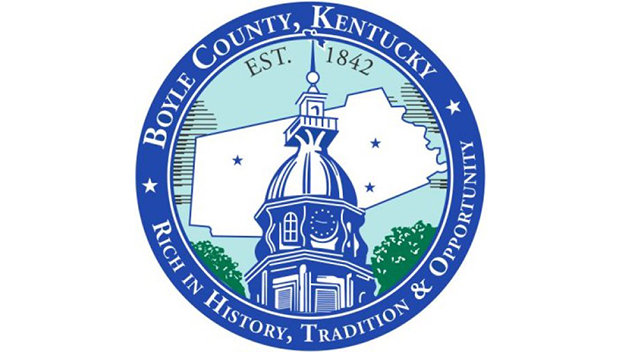 Boyle County Fiscal Court’s latest discussion on how to amend its animal control ordinance to regulate barking dogs and noise nuisance, either at someone’s home or a commercial kennel, led to more wording changes, and a frustrated attorney.

At Thursday morning’s regular meeting, County Administrator Julie Wagner was on the agenda again to present her most recent version of Animal Control Ordinance V.842.1, something the court has debated and asked her to revise at every meeting for more than four months.

The interest in amending and creating processes to address dog kennels and nuisance from their barking has been ongoing since two neighbors of Parker’s Place Kennel on Maple Avenue have complained about the business for more than a year.

As Wagner began to address the court, Magistrate Jason Cullen asked, “Do we have a guest who wants to be part of this conversation?”

At about that time, Director of Solid Waste Angie Muncy poked her head in the door and said, “There’s a gentleman out here trying to get in.”

Wagner said she didn’t ask anyone to speak. Judge-Executive Howard Hunt said, “We’re not inviting anybody to be part of it (the ordinance discussion.)

Cullen said, “It’s the attorney that sent us the letter regarding Parker’s Place. He wants to be a part of the conversations on any animal control ordinances.”

Magistrate Phil Sammons answered, “If they’re not on the agenda, we don’t talk to them.”

After further debate about the legality of having someone speak who was not on the agenda, versus what the attorney could say or suggest about the ordinance, the court ultimately decided not to let the attorney speak.

The letter Cullen referred to was sent to the fiscal court on April 7, from Richard Getty of The Getty Law Group of Lexington who was hired by Rodney and Wendy Lanigan, owners of Parker’s Place Kennel.

It stated in part, “Boyle County taxpayers expect the fiscal court to act with appropriate restraint and consider the least restrictive measures to resolve any potential conflict before resorting to such a blunt instrument as county-wide ordinances or business licenses. … please allow this letter to serve as notice that our firm stands ready to vigorously challenge the legality of any inappropriate overreactions by the fiscal court that infringe on the constitutional rights of Parker’s Place and the Lanigans, a prospect we hope can be avoided….”

“It should be noted that Parker’s Place has always complied with all applicable county regulations and Planning and Zoning requirements to date. Parker’s Place sought consideration by and obtained approval from all applicable local authorities before opening its doors for business. The Planning and Zoning approval was challenged by the same neighbors now complaining once again and those objections were overruled entirely by the Boyle Circuit Court.”

After several minutes of debate about whether or not to allow the attorney inside the courtroom, Wagner said she had made several more changes that the magistrates wanted added to the amendment.

One of the measures that an animal control officer could use, once the ordinance passes, is to see and hear the dogs continuously barking for 20 minutes between 7:30 a.m. and 9 p.m. A second complaint would require that two additional households complain about the noise, before the animal control officer could issue another citation. She said that based on the magistrates’ discussion at last month’s meeting, she did not include decibels and distance in the equation.

Magistrate Jamey Gay said, “To me, this business has gone through the proper zoning procedures,” and Wagner answered, “They have.”

Gay said, “I just see this being more applicable to an individual neighbor that owns animals.”

He added that he thought the ordinance amendment and the forms that Wagner had developed for kennel inspections, business licenses, and noise nuisance complaint were good. However, the barking aspect involving kennels shouldn’t be included in the amendment.

“The kennel is a business, that’s going to have barking dogs. And this business has gone through all the proper channels and everybody had a voice in making their case, but it’s been approved to be a kennel in this location.”

After more than 30 minutes debating barking dogs and kennels, County Attorney Chris Herron said he would revise the amendment again and delete the word “kennels.” The first reading of the ordinance amendment should take place at the court’s next meeting. It won’t got into law until after a second reading, so it is still subject to change, Herron said.

Cullen said he wanted to see the number of individuals who have complained about the kennel. “Because we’re setting a precedent here that if we get four or five complaints for 30,000 people, we’re going to make a change.”

Hunt said the ordinance wasn’t pointed directly at Parker’s Place Kennel, but it had been highlighted in recent discussions.

Gay added that he thought the most recent ordinance draft, “Protects the business because it doesn’t apply to a business.”

On Friday, Getty sent another letter to the fiscal court stating his displeasure with not being allowed to address the court during its meeting in order to “raise some important suggestions my clients believe should be considered by the fiscal court.” He also alleged that he was “rudely” spoken to in the hallway outside the fiscal courtroom and was physically blocked from entering the room.

The letter sent April 16 stated, “Both my clients and I had hoped that their input would be considered regarding any proposed amendment of the ordinance. That appears never to have been the intention of the fiscal court and what happened does not bode well for any kind of mutually beneficial relationship keeping this matter out of the courts. ..”

• Centre College President Dr. Milton Moreland and Greg Butler with Republic Services told the court that the college was interested in purchasing property on Roy Arnold Boulevard, where Republic has a transfer station for builders to drop off their construction waste. Centre plans on using the area as part of its $50 million athletic expansion.

At the last fiscal court meeting, Muncy said Republic Services was in breach of contract with the county because the transfer station was blocked and couldn’t be utilized by contractors. Hunt was going to send a letter to the company, however, “It appears that this business venture is economic development. A venture that Centre is initiating outweighs any breach of contract consideration.”

In addition, Republic is giving the county a 25% discount from all of its dead animal carcass disposal.

• Muncy told the court  that because the county ran into such strong public opposition for its own dead animal composting facility, she is forced to return a $143,154.80 grant that the state had given Boyle for the project.

“I felt that the state needed to know why we were sending.”

“I have been in local government for 30 years, and I have never encountered such negativity and unwillingness to do something, with people not even trying to understand.”