Hemp breaking in early in Kentucky 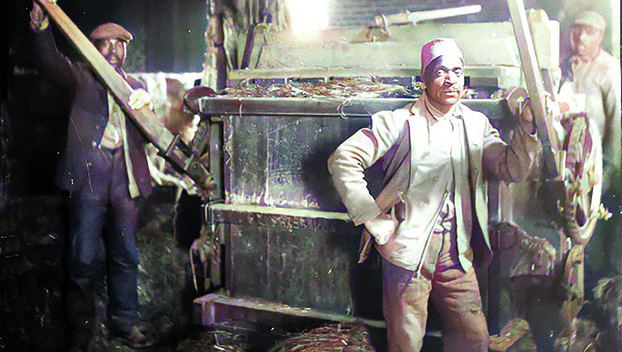 An unidentified group of men are working with hemp production in this photo owned by Michael Hughes.

A Black man from Junction City man made the news in 1924 after he invented, patented, and built a power hemp break which could revolutionize the hemp industry, according to articles in The Kentucky Advocate.

Churchill White was granted the patent on the hemp break in the United States and Canada and papers were filed for patenting of the invention in Russia.

The information also was published in Volume 7 of the “Negro Year Book, 1926-1927, an annual Encyclopedia of the Negro.”

“It would be a strange thing if the descendant of an African slave were to perfect a mechanism which might prove the means of restoring the glories of what once shared the honor with tobacco being Kentucky’s leading crop,” according to the Advocate.

More than 300 machines for breaking hemp have been patented. Records show none of them were entirely satisfactory.

One was used for a time in Kentucky that was supposed to break and clean 8,000 pounds a day, but evidence of its failure is that it was abandoned.

Churchill White continued to turn out his 150 pounds a day with his ancient wooden break and was still producing his hemp crop after others were in the tobacco fields.

“His power break may supplant the age-old method, but it will remove a picturesque figure if it does.”

Churchill traveled around local communities giving demonstrations of his invention with the gas engine which had the capacity of 2,000 pounds daily.

He fed the stalks into an opening on the side of the hemp break where they were engaged by two sets of swords, one set with an upward movement and the other with a downward. The separating of the fiber from the hemp stalk was very thorough and with less injury to the lint than with the old-fashioned hand break.

Kentucky’s hemp crop, which reached a total of 75,000 tons in 1859, dropped to less than 5,000 tons, Kentucky and California produced the bulk of the American Crop. Nothing had been found to equal the limestone soil of Kentucky for growing hemp.

“When the last century was still an infant, hemp growing and manufacture was a thriving industry in this state.” Baling linen, as it was then called, hemp bagging for cotton bales, was manufactured in a quantity sufficient to supply the entire South.

“Some sail cloth and a little fine linen were attempted. Even that early the protectionists were busy. They asked an import duty on such goods or a bounty for American manufacturers but despite the fact that they did not get it the industry flourished for a great many years.”

Kentucky, which in 1810 boasted 38 rope walks and 13 cotton bagging mills, besides factories for twine, fish lines, seine cord and ship cables, which consumed nearly 6,000 tons of hemp a year, then was capable of producing hemp enough for the entire United States.

“Were there a dependable hemp breaking machine, Kentucky today would supply enough for the nation, but the bulk of the fiber grown in Kentucky still is extracted by the old clumsy wooden slat breaks which have been in use since the first cop was cut.

“Before the grain lands of the West were cultivated, the Commonwealth stood first in production of hemp, at the same time that it was also first in wheat, second in tobacco, corn, hogs, mules, third in flax and fourth in rye.

“During that time American hemp was superior and greatly sought for the rigging of vessels. The government encouraged the growth and manufacture of grades for the Navy, whose windjammers then were second to none in numbers and power.

“As steam gradually supplanted sales and tobacco began to be the better money crop, hemp production dwindled and Kentucky came to the front as a tobacco state.”

After McCormick’s reaper was invented, Kentucky manufactured binder twine for harvest fields, but Yucatan made twine cheaper for American farmers that the industry slackened again.

Virtual and hands-on activities at the library are available