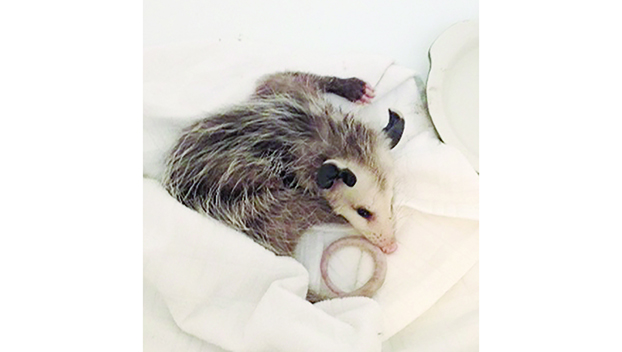 A tiny piece of life

I was on my usual one mile walk when I glanced around at my surroundings. Leaves of every variety were popping out.

Fragrant dandelions were dotting the quilt of greening grass. Spring was in full swing. Passing the abandoned school, I noticed some sort of grey at the base of a tree in the yard.

Curious, I broke my stride and walked quietly toward the tree. Could it be a bird? Or a rock? But soon I discovered it was a tiny possum curled up defensively. Or was it just trying to keep warm there on the spring-cool ground?

Impulsively, I touched it to see if it was alive. Its tiny mouth showed me it had plenty of teeth. Its eyes glared at me warily. I looked around for its kinsmen but there were none. Had it fallen from its mother’s back? If so, will she be back to get it after she’s counted noses and found one missing?

I thought about my cat and how pleased he would be to come upon such a snack laying under that tree. Helpless. No mean mamma for protection. Not much energy left for self-defense. I could not continue my walk and ignore that baby creature’s plight.

I walked hastily home to get one of my cat’s baby blankets from the laundry basket. When I returned 20 minutes later, the possum was still there. Was it dead? Was it dying? Well, not on my watch it wasn’t. I gently picked it up, cradling it with the blanket. The possum eyed me suspiciously but apparently lacked the strength to protest.

Once home again, I knew my cat would be curious about this tiny piece of life now in his house. And that could prove fatal to the helpless baby critter.

Finding no suitable boxes on hand, I gently placed little Ozzie Possum and his new blankie into the bathtub for safekeeping. Now what?! I called the Humane Society and described my dilemma. Although they were unable to provide help from their facility, they gave me the name and phone number (859-229-1783) of “Cradle of Critters Wildlife Rescue” in Salvisa.

When I called them, I found an animal-loving lady, Teri Robinson, whose mission in life is to help injured or lost animals of all kinds. And, instead of me driving little Ozzie to her, she insisted on coming to Danville to pick him up at my home, such is her dedication.

More information about Cradle of Critters can be found on their Facebook page. Also, Google “Trooper the Blind Raccoon” for a truly heartwarming story about another rescue animal.

With summer right around the corner, there isn’t a better time than now to discuss skin damage and skin cancer.... read more