King of the skies:
Pruitt honored by local airport board 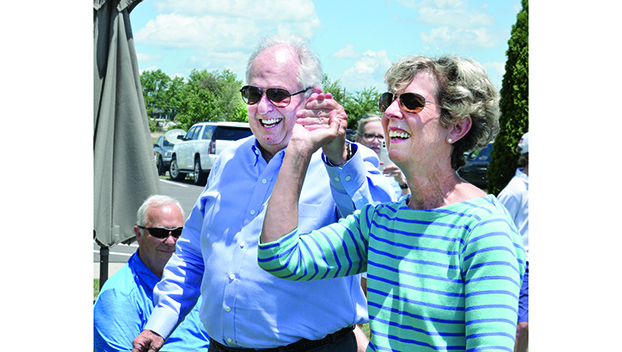 Patti Powell light-heartedly escorts King Pruitt to a bench dedicated in his honor for serving on the Danville-Boyle County Airport Board for 46 years before retiring last year from the board. - Photo by Robin Hart

As he watched a large private jet take off heading to Nashville from Stuart Powell Field Sunday afternoon, King Pruitt was all smiles when he said it was going to be about a 23-minute flight.

He pointed to a tiny building on the far edge of the Danville-Boyle County Airport that was practically hidden by other large hangers and said that was the airport’s first hanger/mechanic shop and office. “We’ve come a long way.” 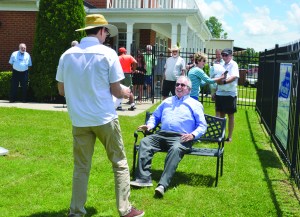 Danville-Boyle County Airport Board Chair Rob Caldwell, standing, reads a tribute to King Pruitt, who retired from the board after 45 years of servce. Pruitt is seated on a bench dedicated in his honor. Caldwell said the fenced in area will also soon have a playground area where families can visit the airport to watch planes in a safe environment. – Photo by Robin Hart

Several smaller planes had landed earlier in the afternoon and were parked on the ramp. And a food truck was serving hot dogs and other favorite summer foods at the airfield during its monthly fly-in where the public is invited to come out and watch the planes take off and land.

Sunday was also the day that the Danville-Boyle County Airport Board honored Pruitt for his 45 years of service to Stuart Powell Field and as a board member from 1975 to 2020. Pruitt was also a pilot.

Patti Powell, who is continuing her late father’s enthusiasm for the airport named in his honor, gathered many of the visitors, friends, and Pruitt’s family to a grassy area where a bench was unveiled and dedicated to Pruitt. She said the event would have been held last summer when Pruitt retired from the board, but the pandemic prevented it.

Leading Pruitt to the bench as Powell’s husband and world-renown trumpeter Vince DiMartino played an original fanfare, both he and Powell were all smiles. Later, she said it was “a fanfare fit for a King.”

Speakers for the occasion included Boyle County Judge-Executive Howard Hunt and Danville Mayor Mike Perros, who said he was there as a friend and fellow pilot as well.

Board chair Rob Caldwell also gave a tribute to Pruitt.

He said Pruitt’s first solo flight was in 1970, and he soon joined the Goodall Flying Club. Over the years, Pruitt owned two Cessnas until he was forced to quit flying due to health issues.

“In my tenure on the board, I have noticed how King (Pruitt) brought a calming tone to the board with his keen sense of empathy, accurate assessment of the situation, and appreciation for the airfield community. When he speaks, it is always accurate and supportive. We look forward to seeing him around during the next chapter,” Caldwell said.

Later, Pruitt said Stuart Powell Field, “Is quite a nice airport.” In fact, many of the pilots say it’s the nicest community airport around, he added.  “All of this is Stuart Powell’s dream. And I enjoyed the ride with Stuart.”

Deadline to register for ‘Shot At A Million’ Wednesday…