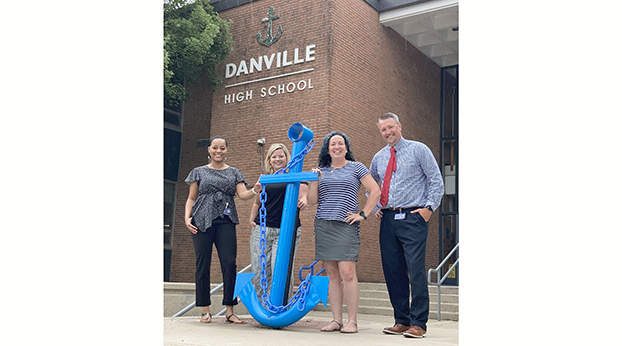 To help “re-energize our return to normalcy” teachers at Danville High School have developed the brand new Admiral Leadership Academy for students who want to get involved in their school and the community, and leave a legacy for DHS.

“I think this is such a great idea. It’s a way to re-energize our return to normalcy. We want to jump-start our celebration of kids returning to school,” said new DHS Principal Chad Luhman.

The vision of Admiral Leadership Academy states, “By identifying students’ talents and potential, we will empower them with the skills and experiences to better their own lives and create a lasting legacy at DHS.”

According to the ALA media post, the leadership and team-building component “will empower students to confidently use their voice to advocate for themselves and their Danville community and work as a team.”

“We wanted to re-imagine how we saw our kids. What better way to try and increase their sense of belonging and sense of place for our students than to let them have a voice,” Luhman said.

Since the pandemic created havoc for learning opportunities during the past school year, school districts have received federally funded ESSER grants to be used to help students close the gaps in their learning. Co-director of ALA Jennifer Shearer said all schools that received the extra money are developing ways “to help kids with unfinished learning.”

She explained that they wanted a “positive” learning project, so they created the Admiral Leadership Academy.

“Leadership to us is not just standing up in front of a student body and talking. Leadership is who you are. That’s why we have all these different classes – to create a well-rounded person.”

Shearer said the upcoming two-week kick-off for the academy, which is open to every high school student, is filled with opportunities to “really get involved in the community and school.”

Co-director Charra Murray said once classes begin in August students in the ALA will continue meeting and working together throughout the year. She hopes students will also be delegates at a variety of school committees and councils, such as the site-based decision-making council or other school improvement meetings “so we have student voices along the way,” Murray said.

She added that the ALA will be a place for students who may not see themselves as leaders, but joins because a teacher sees their potential and urges them to participate.

During the maiden two-week voyage of the Admiral Leadership Academy, the mornings will start with breakfast and leadership and team-building exercises.

Then students will rotate through breakout sessions.

During the first week they will focus on fitness and nutrition; cooking and culture; creative arts and theater; and engineering. The second week’s sessions will include the history of DHS; outdoor science; marketing and entrepreneurship; and introduction into first aid.

There will be 10 teachers from the district who will lead the classes.

The academy ends at noon with lunch and a legacy project planning session. “That’s my favorite part of the academy,” Shearer said. “This was the biggest thing for me that I want to see our kids do. It is something they would work on throughout the year that would leave a legacy on Danville High School.”

In the future, students will decide on what legacy project they want to complete. But this first year, the project to create a new student center was chosen for them.

“They’ll be moving things around, creating a space for the kids. The student center will have the counselors’ offices, a lounge for the kids, and the Admiral Store.” Shearer explained.

And there will be plenty of opportunities for the students to not only work on the student center design team, but they can also work on design teams for the Admiral Store, landscaping, and hallways.

Shearer said not all students want to be on the student body council. But the academy will give them other opportunities “to be invested in the school, and the cultural climate, so that they really felt like they are really a part of this building, not just coming here and taking classes and going home.”

Shearer explained the teachers have laid the foundation for the academy to address the needs “of the whole student.” She said the organization isn’t focused on tutoring students, but if teachers see there is a need for an academic tutoring aspect, then it can be added.

“We’re really kind of shaping it as we go. We’ve laid the foundation, but it can be a lot of things.”

Maggie Myers, who is the director of the Youth Service Center, has partnered with the academy, too.

“The strong thread throughout this program is when we talk about what Danville schools are, what makes us unique, what makes us special. We look at the diversity of our student body. We look at community involvement, not just our students going out into the community, but how active and involved our community is in supporting our students and being a part of their learning experience.’
Myers said, “ I feel like this leadership academy is really an opportunity to drive that home, so that as students start their school year, they might have this established foundation as who they are as a student and how they belong in Danville High School. But even on a bigger scale, how they as a student of DHS, fit into our community at large. I feel like that’s a huge part of the ‘why’ behind this project.”

TO SIGN UP FOR ADMIRAL LEADERSHIP ACADEMY
The Admiral Leadership Academy is open to any Danville High School student and is free.