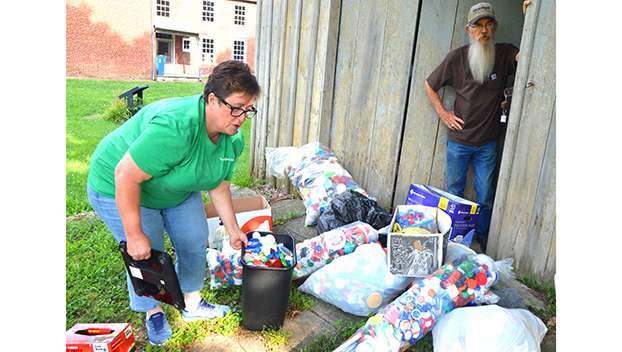 Lisa Bottom, organization chair of Main Street Perryville, picks up a bin full of bottle caps and a scale to begin weighing bottle caps. Robby Mayes, design chair for MSP stands at the doorway of a shed, which he said was full of bags and containers of bottle caps, behind the Karrick Parks House in Perryville. - Photo by Olivia Mohr

Main Street Perryville has led an initiative to collect plastic bottle caps to be turned into benches over the past three years and wants to place them around the town’s parks and downtown shopping areas.

On Monday evening, about eight people gathered at a shed behind the Karrick Parks House in Perryville, where the bottle caps are being stored, to weigh, sort, and bag them. The shed was full of bags upon bags of plastic caps, from all kinds of bottles.

“We’ve got to thank everybody and their grandmother,” said MSP Executive Director Vickie Goode.

She said the undertaking has been embraced by many individuals and organizations in the community, including Boyle County Public Library, radio stations, churches, and schools. Some bottle caps have made their way over from Georgetown, too. 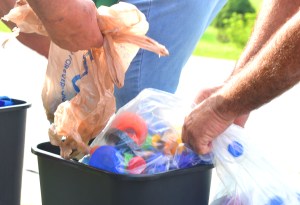 Woody Stigall and Pete Bottom dump bottle caps into a bucket to weigh them. – Photo by Olivia Mohr

Goode said right now, there aren’t any benches in Barrel Park, which is located along the Chaplin River. The goal is to get four benches initially, and then eventually at least a dozen to place around town.

“It’s going to give us an opportunity to give back to the community, give them a place to relax and sit for tourists and locals, to sit and enjoy our parks, and if you’re in downtown shopping and you want to sit down and rest,” Goode said.

The bottle caps will be sent to Green Tree Plastics, which is home of the ABC (A Bench for Caps) Program, in Evansville, Indiana, by appointment.

“It’s a great program because you’re recycling the plastic,” Goode said. “That’s something that’s not going to go to the landfill.”

She said MSP was lucky in that when they sorted the caps, there was little they had to throw away. The caps had to be clean, and there were certain requirements they had to meet. For example, MSP couldn’t accept metal lids, bottles, plastic bags, fast food drink lids, soap or lotion pumps, or food containers.

“Believe me — people who are interested in doing this — they’ve saved the tops off Tide bottles, Crisco bottles, any kind of pop bottles, water bottles, just about anything you can imagine can be used,” Goode said.

For a single 6-foot bench with a back, it takes 200 pounds of caps and a $340 donation. On Monday, the group of eight people sorted 450 pounds of caps into large plastic bags, tied them up and recorded their weight. For four benches, seven more bags will need to be filled.

Goode said for the monetary donation side of things, several groups have helped raise money for the benches, including the Lion’s Club of Perryville, MSP, David Walden, the owner of Walden Funeral Home, and the Perryville Merchant’s Association.

Danville superintendent evaluation released; Stevens does not agree with…