Horns up! Former DHS band members being recruited for alumni band for homecoming 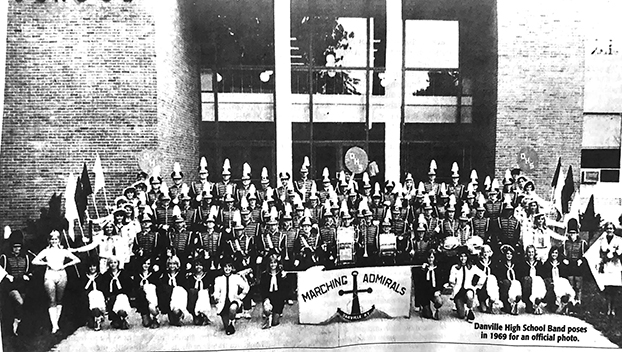 Members of the 1969 Danville High School marching band pose for a photo. -Photo from Advocate-Messenger archives.

Attention all former Danville High School band members! Whether you played an instrument, beat the drums or twirled a flag, you’re needed to form an  alumni band which will play during the DHS homecoming football game Sept. 17. And if it’s popular with the members, there may be many more opportunities for them to perform — perhaps even in local parades and concerts.

Spearheading the effort is Camille Towns, who currently works with the DHS marching band as a drill writer, visual designer and consultant and wife of the band director. “As long as Jeff Towns is the director, I will be around in some aspect of service,” she said.

She is a former assistant DHS band director “and feel a kinship with these alumni as strong as any bond I had with my own high school band mates. I actually graduated from Lincoln County High School in 1990 as a trumpet player and field commander,” Towns explained.

She said when Bill Bandy, a former DHS band member from the class of 1973, and current member of the group PowerPlay, expressed interest in forming an alumni band, Towns said, “We were all on board!”

“Like any reunion, people long to see friends from their high school journey and band members often feel it would be fun to perform together just one more time,” Towns added.

She said “This is my first recollection of such an ensemble being formed and I truly believe it is long overdue. We love the alumni and credit our continued success to the path they forged before us in the Danville community.”

Rehearsals begin Tuesday, Aug. 10 from 7 to 8:30 p.m. in the DHS band room and will continue every week until Sept. 17. “We plan on rehearsing for at least 60 minutes and still have some time to visit and reconnect,” Towns said.

Even if someone lives out of town, they can still participate. “One innovation that has been a positive benefit over the past couple of years is the use of live streaming and video sharing for rehearsals. We will happily send music to any member in order for them to rehearse with us via internet or on their own. As for guard, baton and pom performers, we will be able to help them with a simple routine, unless they would like the opportunity to design their own as a group. … we whole-heartedly want poms, flags and majorettes to join us. After all, that’s the beauty of the marching arts!”

If interested in joining the band, there is a page on Facebook entitled, “Danville High School Band Alumni” where alumni members can join and get more information. There’s also a dedicated email address for correspondence: danvillebandalumni@gmail.com.

“For those who are more comfortable speaking to a live person, they may reach me, Dr. Camille Towns, via Messenger.”

And if someone needs to borrow an instrument, that’s doable too.

“Brass and percussion instruments are more readily available, but we also have a few woodwind instruments on hand,” Towns said. “Flags will also be provided for rehearsal and performance. If any alumnus needs an instrument or flag, they are strongly encouraged to let us know as soon as possible. Also, we are hoping to have Alumni Band shirts made for each alumnus in attendance, so be sure to send us your shirt size.”

The alumni band won’t be required to march on the field, but they will perform in an arc around the current band while the students perform their show. “We are hoping the alumni will perform two of the three show pieces with current members, including Spinning Wheel and Mr. Blue Sky.”

They’ll also play some of the standard “fight songs” in the stands during the football game. “In fact, some of the standards many will remember will be revived, such as Vehicle, Tusk, Land of A Thousand Dances, 25 or 6 to 4, Go Fight Win and Anchors Aweigh. As always, suggestions will be welcome,” Towns said.

“This should be considered the first step in a renaissance of the musical and marching arts in Danville. So many alumni still have amazing abilities that should be showcased and appreciated by the community.”

Towns added, “It’s difficult for me to imagine this opportunity being anything but fun! Band people are a special breed, and we enjoy bringing the exuberance of life to an event. I have met many alumni of the DHS band and feel that having them collectively reunite in order to showcase their continued passion for the performing arts while celebrating as eternal Admirals may become an epic sensation told in future folklore!”