Female doctors serving as board president, vice president at EMH 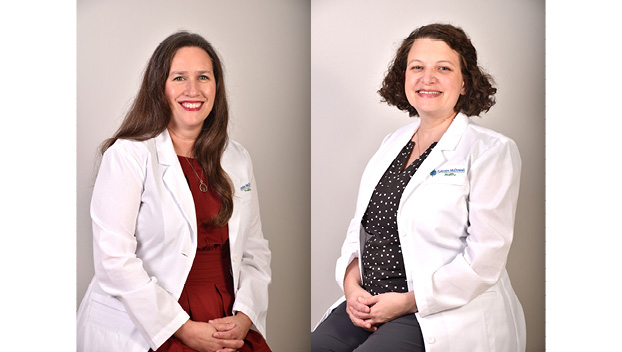 Their first day in their new positions was Oct. 1, and they will serve two-year terms. Prior to her position as president, Turcea was medical staff vice president beginning in 2019, and Chatham has held positions on the board for six years, as a community physician member and later the chair of the quality and care committee.

Turcea is also a board representative on the diversity, equity and inclusion committee. The doctors explained their roles on the board and what their positions entail. Both are in private practice in different fields and have privileges granted to them to work at Ephraim McDowell Regional Medical Center — they’re no employed there. Between them, they represent both the departments of surgery and medicine as well. Turcea is an obstetrician-gynecologist for Cumberland Family Medical Center, Inc., and represents the surgery department, and Chatham is medical director of Heritage Hospice Palliative Care, representing the department of medicine.

They serve as liaisons between physicians and hospital administration, working with the administration to make sure physician voices are heard for the direction of the hospital and the care provided. It’s a collaborative system, Turcea said, “Because, you know, we certainly don’t have the training to run a hospital, and they don’t necessarily have the training to treat patients, but together, we create a good system,” since they can provide both leadership and staff perspectives.

Turcea was born in Danville, right at EMRMC, and has worked in Danville since her residency. Chatham is from Houma, Louisiana, and has also worked in Danville since completing her residency. With both a president and vice president representing the medical staff, there’s always a person serving in the role when one of them isn’t available, and they also between the two of them represent both the departments of surgery and medicine.

When asked what prompted them to accept places on the board and expand beyond their private practices to take leadership positions, Chatham said, “It’s something I can’t help but be involved in. I tend to get involved in that sort of thing. That’s the only way to really know what’s happening, is to show up for meetings and have some input and also effect change.”

It is a big time commitment, though, and there can be a lot of heartache and difficult conversations, she said.

The significance of this is also making sure that people feel represented, especially because as physicians it’s their duty to care for community health, she said.

“So if you can have a healthy, functioning, efficient, intelligent, up-to-date medical staff, physician group, then you will provide good health care,” Turcea said.

She sat her family down to talk about the position and told them taking the position would mean spending less time with them, and Lucy’s “eyes lit up” when Turcea mentioned she would be the first woman to hold the position. Lucy told her she couldn’t say no. Lucy’s also a big “Hamilton: An American Musical” fan, and she told Turcea, with a reference to the show, “You’ve got to be in the room where it happens.”

Both Turcea and Chatham said their young children are proud of them.

Representation matters, and it’s been great to see how the staff has been supportive and excited to see women take the positions, Turcea said.

Later, Chatham said, “I can’t tell you how many meetings I’ve sat in where I was the only female. And believe me, every time a woman shows up on the medical staff here, we notice.”

Two years ago, Turcea and had the idea, to boost peer support among female physicians and bring together those who might not know each other due to working at separate practices, to have a dinner with all of the female physicians they knew of in the local area.

“And it was great,” Chatham said. “It was very well-attended.”

They haven’t been able to do it again since the COVID-19 pandemic began, but it was nice at that time to meet other physicians.

With the ongoing pandemic, Turcea and Chatham have begun their current positions on the board during a very trying time. In response to the pandemic in their previously-held roles, Turcea said the board has had a lot more meetings, trying to be as proactive as possible. As a surgeon, it’s been important to help patients set their expectations in a realistic way, by for example letting them know their elective surgeries might need to be rescheduled.

And it’s been important to check in on physicians and staff to make sure they’re doing OK.

“It’s not easy, and you’re supposed to be impermeable to difficulty, right?” she said. But she’s tried to help share the idea that it’s all right to ask for help, show vulnerability and check on each other.

Chatham said she has seen a lot of distress among medical staff, and she’s let them know she’s a representative on the board because she said sometimes knowing who leadership is and knowing they are trusted individuals who can listen to concerns and explain processes can be helpful.

And with visitation restrictions, “It’s heartbreaking.”

When it comes to beds, ventilators and staffing, they’ve been able to meet the need, “But we have never been one step ahead,” Turcea said.

The community and staff have been great at stepping up and helping out, though, she said, and the hospital has also been providing incentive pay for taking extra shifts and has made other efforts.