Boyle boys’ soccer is back in the 12th Region championship tonight 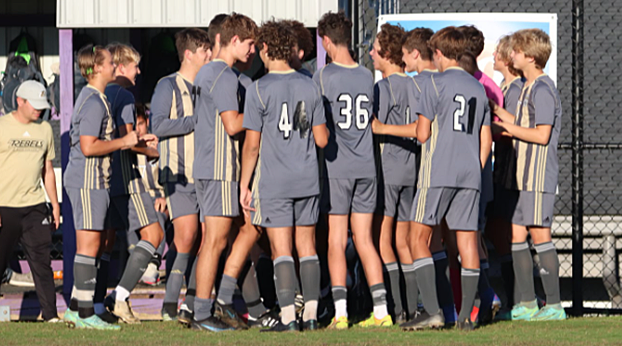 Boyle County vs West Jessamine has been one of the most entertaining series’ in Kentucky boys’ high school soccer through the last few years.

The Colts and the Rebels have now met in each of the last three years in the regional tournament and every game ups the intensity from the last.

West eliminated Boyle in 2019 and Boyle turned the tables last year and upset West in the regional championship, so this year’s game had all the drama leading into it, which made the 3-2 win for the Rebels just that much sweeter.

West Jessamine opened up the scoring early with freshman Josh Sayasane hitting a shot from range that deflected off a Rebel defender and into the back of the net.

The rest of the half was very back and forth and mostly played in the middle third. Senior Colt midfielder Nash Woosley had numerous shots from range, but Boyle keeper McClain Denny was up to the task every time.

The Rebels started the second half strong with junior Tristan Compton smashing a right-footed shot off the far post and in to equalize.

The next 15 minutes were just like the first with both teams creating chances and trying to find a winner.

During this period, junior defender Ben Reynolds collided with a West Jessamine defender and went down injured. He did not return to the match.

With just 8 minutes remaining, it looked like the Rebels had found it. Compton dinked a header over the Boyle keeper to make it 2-1.

West was not done yet. The Colts scored with just 4 minutes remaining on a back post tap in and it looked like this game was headed to overtime.

Boyle had one last gasp with a deep clearance immediately after kickoff to senior AJ Fluty who took the ball down the line and knocked it back to Compton for his third goal and the winner.

Compton was ecstatic with his team’s performance. “It was really nice to see the team come together like that and overtake a very tough opponent.”

Boyle will face the Somerset Briar Jumpers at Somerset on Thursday for the 12th region championship at 7 pm.