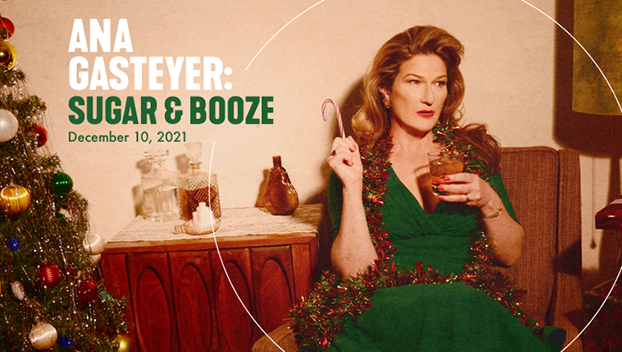 Just in time for the holiday season, Ana Gasteyer: Sugar & Booze will be performing at the Norton Center for the Arts on Dec. 10.

Gasteyer, well-known for her appearances on NBC’s “Saturday Night Live” and FOX’s “The Masked Singer,” will perform festive seasonal songs, both classic and original. The night will offer a swinging nod to the vintage holiday songs of yore with a modern touch and plenty of style.

“While we missed having a holiday concert last year, we wanted to continue the tradition in grand style,” said Norton Center executive director Steve Hoffman. “Ana Gasteyer is such an amazing comedian, actress and singer. Her show will include holiday favorites and new tunes to kick off the season. My personal favorite is, ‘Nothing Rhymes with Christmas.’”

“Sugar & Booze” is the follow-up to Gasteyer’s critically acclaimed debut album, “I’m Hip.” In addition to her celebrated work as a television actor, Gasteyer is a trained singer who has starred in multiple Broadway and televised musicals. She starred as Elphaba in “Wicked” in Broadway and Chicago productions, earning a Jefferson Award Nomination for her performance in the latter.

With original songs like the modern nostalgic title track “Sugar & Booze,” and holiday classics like “I’ve Got My Love to Keep Me Warm,” “Have Yourself a Merry Little Christmas,” and “Let it Snow,” you won’t want to miss this intoxicating, merry blend of jazz, pop, soul, funk, blues and comedy that will send holiday spirits soaring.

The newly-announced performance complements a full year of exciting performances at the Norton Center.

“Patience and understanding have become two characteristics we’ve all had to strengthen during the past 18 months,” Hoffman said. “So, let’s finally have some fun and good cheer as we head into the new year. We have a lot to celebrate!”

An exclusive subscriber presale begins Oct. 25, with public onsale beginning Nov. 1. To learn more about buying tickets or becoming a subscriber, visit nortoncenter.com or call the Box Office, Monday through Friday 9 a.m. to 4 p.m. at 877-HIT-SHOW.