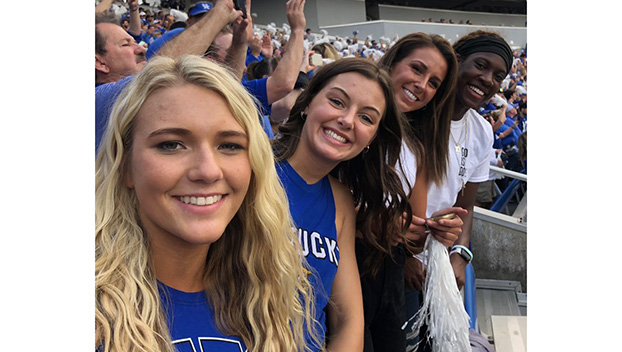 Emma King (second from left) with, from left, UK commit Cassidy Rowe and teammates Blair Green and Rhyne Howard, says this year's team easily has the best chemistry in her three seasons at UK.

Kentucky women’s basketball will hold its own Blue-White Game Sunday at Memorial Coliseum and junior guard Emma King believes UK will be a much better team this season.

“I think this team has a lot of potential. We have a very athletic team and a more veteran team that I think will work to our advantage,” King said. “We do have fewer players so if injury happens, we might struggle.

“But this team as far as better chemistry and being older and more mature and able to play together, I think we will do just fine.”

King said UK had a lot of adversity last year with the unexpected resignation of then head coach Matthew Mitchell followed by Kyra Elzy being elevated to interim head coach and then permanently named head coach. The team and coaching staff also had to deal with COVID protocols.

“It was a very difficult year. I think everybody on our team would say that, coaches included, and I don’t think we realized how hard and strenuous it was until we could sit back and finally breathe,” King said.

“There were so many changes. There was so much it was like a whirlwind and everybody’s head was somewhere different.

“It was difficult mentally for everybody because of how many changes there were but we made it through.

I think that is honestly why our team is so much stronger this year. We have faced that adversity and not many teams had as much adversity as we did.

Even with the adversity, UK was ranked all season and beat five ranked opponents, including top 15 teams in consecutive games.

“There had been just 10 of us and 11 now with the new walk-on (Kristen Crenshaw-Gill) and our team is just way closer this year,” King said. “We get along so well and our personalities just mesh. It has been so much fun working with this team and I think it’s going to really pay off on the court for us.”