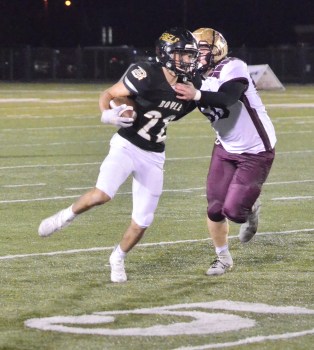 Grant Frisby of Boyle County tries to shake off Bourbon County defender Jean Paul Claudio Maisonet as he carries the ball during the third quarter Friday. - Photo by Mike Marsee 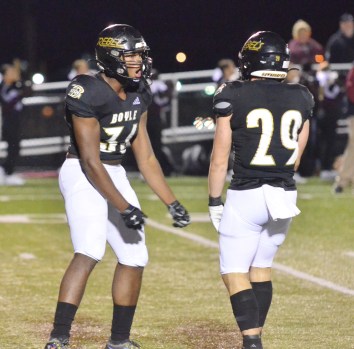 Tommy Ziesmer, left, of Boyle County celebrates with teammate Dalton Stone following one of his three sacks during the first quarter Friday. - Photo by Mike Marsee 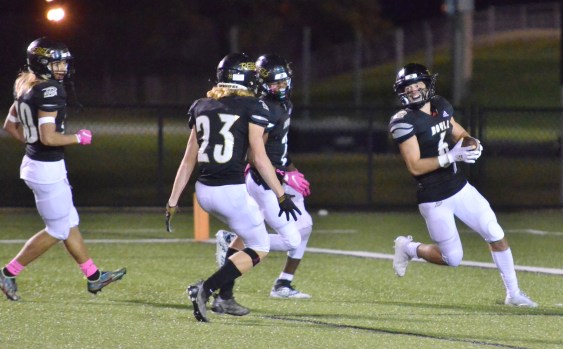 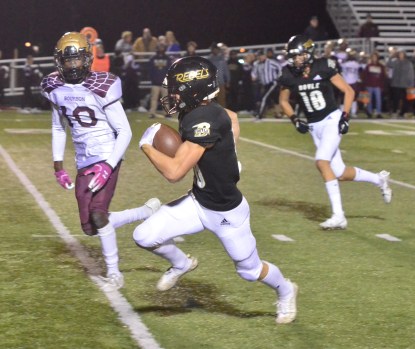 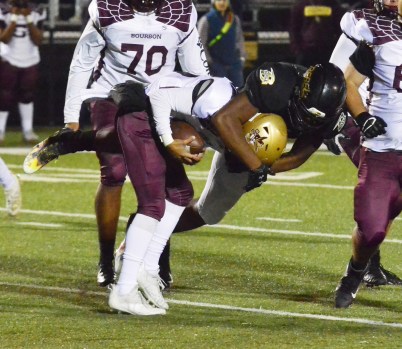 Tommy Ziesmer of Boyle County sacks Bourbon County quarterback Clay Estes during the first quarter Friday. It was one of three sacks for Ziesmer. - Photo by Mike Marsee 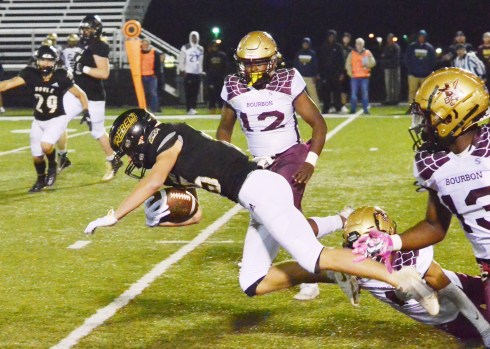 Keenan Stewart of Boyle County stretches for additional yardage as he is tackled by Bourbon County’s Marcus Floyd after a reception during the first quarter Friday. - Photo by Mike Marsee

As sendoffs go, it couldn’t have gone much better.

It was senior night and homecoming rolled into one at Boyle County, making for a festive Friday night at Rebel Stadium. And the football team did its part to add to the atmosphere with the kind of game everyone on the home sideline could feel good about.

The Rebels enjoyed another easy victory in their final regular-season home game, scoring three touchdowns in each of the first two periods in a 49-12 romp over Bourbon County that was the 700th game in school history.

And while they will return to their home turf next month for the Class 4A playoffs — and they hope it will be for an extended run — they got exactly what they were looking for in their ceremonial goodbye.

Boyle put its opponent away early, made precious few mistakes and got plenty of playing time both for seniors who aren’t always on the field and for younger players as well.

“Throughout the entire week — the entire season, actually — we’ve all been working on coming out and trying to finish games early,” said Boyle offensive lineman Zach Mason, one of 12 seniors who were recognized before the game. “Tonight the major goal was to get all the seniors in and try to get them some playing time, so that was successful.”

For the second consecutive week and the fifth time in six games, Boyle (8-1, 3-0 District 4A-5) was not threatened. But that doesn’t mean the Rebels let off the gas.

They scored five times in a span of less than 10 minutes and built a 42-6 lead in the first half of a game that Boyle coach Justin Haddix said they played the right way.

“We always talk about playing the game the right way, and I didn’t feel like we messed around. We came out and did our job,” Haddix said. “We saw a lot of young kids get to play some, and our seniors made some plays. We got a lot of people in, so it was a great atmosphere and a great game for us.”

Boyle completed a sweep of its three district opponents to secure a No. 1 seed for the playoffs. It has won 16 consecutive regular-season games against district foes, and 22 straight overall.

The Rebels’ offense put together its most productive first half of the season in terms of total yardage. They amassed 304 yards, averaging 10.5 yards on their 29 plays.

“We were throwing the ball up and down the field … and we were able to run the ball,” Haddix said.

One week after he threw five touchdown passes in Boyle’s win at Anderson County, Jagger Gillis threw four more to raise his season total to 20. Cole Lanter caught two of them, giving him 15 TD receptions this season.

Gillis and Lanter connected on scoring plays of 34 and 11 yards, and Lanter had a 60-yard punt return for a touchdown. Avery Bodner and Luke Imfeld had touchdown receptions of 33 and 41 yards, respectively. Gillis went 10 for 16 for 184 yards.

The Boyle ground game garnered 120 yards in the first half, led by Dalton Stone with 52 yards on five carries, including a 10-yard TD run.

Three of the Rebels’ five first-half scoring drives took only three plays each.

Bourbon (4-5, 1-2) managed one big play in the first half, as Amir Roberts-Hassan caught an 88-yard touchdown pass from Clay Estes late in the first quarter.

Defensive end Collin Tiller, another senior, said the Rebels played the way they should play every week.

“The expectation is we should do this every game,” he said. “We were playing physical (on defense), we didn’t let them get (many) big plays, and I think our offense really got rolling.”

Line of progression: Boyle’s improved offensive efficiency can be credited at least in part to the development of an offensive line that has become stronger over the course of the season.

Many of Boyle’s top skill players were known quantities when the season began, but the offensive line was more of a mystery.

“I feel like we have our skill positions pretty much cut out. What really hurt us this past season was losing three really good offensive linemen, and two of them went on to play college football,” Mason said.

Their replacements have blended with the returnees, and Mason said both the chemistry and the level of play are much better than they were in August.

“That’s one of the great things I love about high school: We’ve all been playing together our entire lives, and we all know each other, so we already have that friendship, that chemistry. It’s just coming together as a whole unit on the offensive line, on the offense,” he said.

“I think as you’re getting to game nine, game 10, you want to see them start to get better, and I feel like we’ve gotten better each week,” the Boyle coach said.

Haddix said he and offensive coordinator Travis Leffew, who coaches the linemen, try to have a pool of up to eight players who can be used in various combinations.

“There’s always competition … and that makes everybody better,” Haddix said. “Everybody is the next guy up.”

Mason said he and Haddix said the linemen have a tremendous asset in Leffew, who was an all-conference lineman at Louisville, and Mason said he and the other veterans have worked to help the less experienced players.

“If I see something, I try to coach it up as much as possible, especially out on the field,” he said. “It’s not so much getting on them, it’s more like trying to get them to come on. No negativity, it’s all positivity.”

Triple play: Defensive end Tommy Ziesmer had three sacks in the first quarter, taking down Bourbon’s Estes for a total loss of 14 yards and one turnover.

On the third sack, the ball came loose as he flung Estes to the ground. Daulton Peetz recovered the fumble to set up a Boyle touchdown.

Ziesmer leads the Rebels with five sacks and shares the team lead in tackles for loss with nine.

Yankey award: Tiller received the Robert Allen Yankey Memorial Rebel Award during the senior night ceremony. The award is presented annually by Boyle football alumni in memory of Yankey, a standout player who died in 1970 in a drowning accident during his senior season.

Tiller said he was honored to be chosen for the award, which recognizes qualities including sportsmanship and leadership.

“I’m grateful,” he said, “but we’ve got one common goal as a team, and that’s a state championship.”

Extra points: Two more Rebels scored the first points of their careers Friday, making for a total of six in the past two weeks. Keenan Stewart, who had three receptions in the first quarter, caught a pass for a two-point conversion late in the second period. Andrew Carr, a freshman who also plays for the Boyle soccer team, kicked the extra point after Boyle’s final touchdown.

The Rebels’ offense amassed only 30 yards in the second half, but the Rebels ran only nine plays. … Boyle has played 700 games in 59 seasons. The Rebels are 474-219-7 for a .677 winning percentage. … Boyle’s first postseason opponent is set. The Rebels will host Anderson County in the first round of the Class 4A playoffs for the second time in three years Nov. 5.

Week 10: Boyle faces a formidable challenge in its final chance to prepare for the postseason this Friday at Frederick Douglass, one of eight undefeated teams in Kentucky.

Douglass (9-0) has won its last six contested games — two of its wins are by forfeit due to COVID-19 cancellations — by at least 31 points each. Only four teams have scored on the Broncos, and none got more than Bryan Station in Douglass’ 27-14 win in its season opener.

Douglass opened in 2017 and is in its fifth season, and the last two have ended with deep playoff runs. The Broncos were the Class 5A runners-up in 2019, and they reached the semifinals last season.

Samuel Cornett, a 6-foot-6 senior, is the first Douglass quarterback to start in consecutive seasons. He has thrown for 1,453 yards and 15 touchdowns.