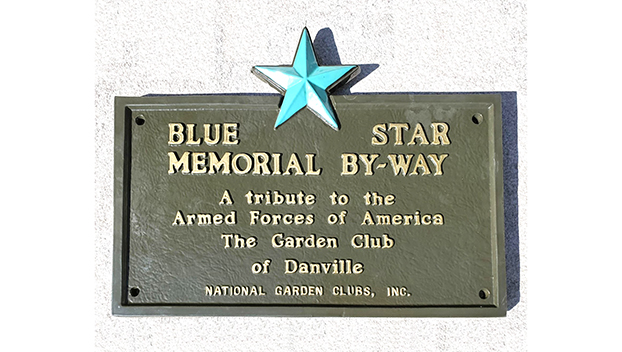 Music, flags, tributes and a 21-gun salute will mark the dedication on Wednesday, Nov. 10 of a Blue Star Memorial By-Way Marker in front of the Boyle County Courthouse. The program, presented by the Garden Club of Danville, begins at 1 p.m., rain or shine.

The public is encouraged to join representatives of city, county and state governments, military officials, and the Garden Club of Kentucky, along with veterans organizations who will pay tribute to all veterans.

Since World War I, a Blue Star Banner displayed in the front window of a home told others that a family member was serving in the Armed Forces. The blue stands for hope and pride.

That banner inspired National Garden Clubs (called National Council of State Garden Clubs at the time), to develop the Blue Star Memorial Highway Program. In 1946, Garden Clubs all over America began planting trees and purchasing cast aluminum plaques to install along highways across the country.

The program originally honored World War II veterans. Its mission soon expanded to include all men and women who had served, were serving or would serve in the Armed Forces of the United States.

Later, a smaller marker became available for placement in parks, civic and historical grounds. This is the Blue Star Memorial By-Way marker that will be installed at the Boyle County Courthouse on the day before Veterans Day this year. Funds for its purchase were raised by the Garden Club of Danville.

The plaque will be mounted on a stone base donated by McAlister Stone of Lancaster.

The oldest veteran in Boyle County, Paul Stivers Chandler, 103, will place a wreath at the base of the marker. The wreath will be made by Elspeth Cobb, a member of the Garden Club.

The dedication concludes with a 21-gun Salute and the playing of “Taps” by Vince DeMartino. All citizens of Boyle County, whether veterans or not, are urged to attend on Nov. 10 and celebrate our veterans.