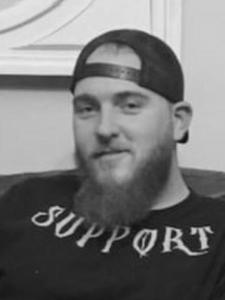 Spencer Gregory Timberlake, 30, of Moreland passed away unexpectedly Thursday, October 28, 2021. Born August 13, 1991 in Fayette Co., he was the son of Greg Timberlake and Tammy Simpson Randolph. He owned and operated GST Plumbing. He served in the United States Army National Guard in Kuwait and was a member of the Avengers Motorcycle Club. He enjoyed hunting, but riding motorcycles was his passion. Spencer was the life of the party and was loved and will be remembered by all who knew him. Survivors include his mother, Tammy (Shane) Randolph, his father, Greg (Victoria) Timberlake, both of Moreland, 2 precious children, Nora Kate and Mayhan Timberlake, whom he adored; 2 sisters: Hannah (Cameron) Honaker and Courtney Hamilton of Moreland, 4 step-brothers: Jonathon and Jacob Randolph of Moreland and Cruz and Blake Murphy of Junction City, maternal grandparents: Nancy and Lewis Long of Lancaster and Barbara and Elwood Randolph of Moreland, paternal grandparents: Mary Louise Timberlake of Moreland and Sonja Gilpin of Junction City; 2 nieces, Huxlee Jane and Porter Mae Honaker, 1 nephew: Miles Asher Hamilton; and numerous other family members and friends. He passed away alongside his girlfriend, Briana Denny. Funeral service will be at Junction City Baptist Church on Wednesday, November 3, 2021 at 11 a.m. by Bro. Choe Sergent and Bro. Mike Cox with visitation at the church Tuesday from 5-8 p.m. Burial will be at Hustonville Cemetery with Military Rites. Pallbearers will be Devin Coffman, Josh Cox, Alex Cox, Chris Jackson, Oscar Cummins, Kyle Kitchin, Cody Young, Taylor Muse, and Jonathan Morgan. Honorary pallbearers will be the Avengers.A memorial account has been set up at PBK Bank for Nora Kate and Mayhan. Donations may be dropped off or mailed to PBK Bank, C/O Spencer Timberlake Memorial Fund, 54 Henry St., Junction City, KY 40440.A guestbook is available at www.wlpruitt.com.