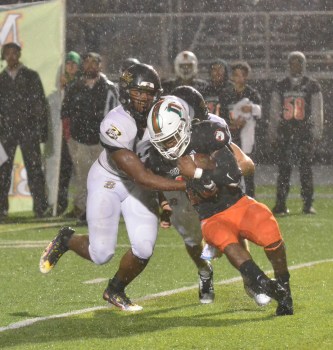 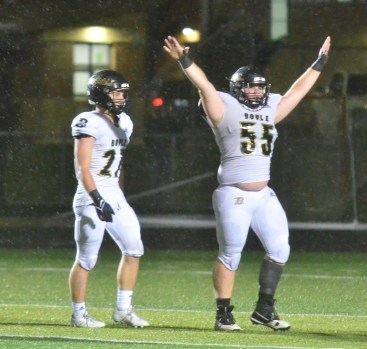 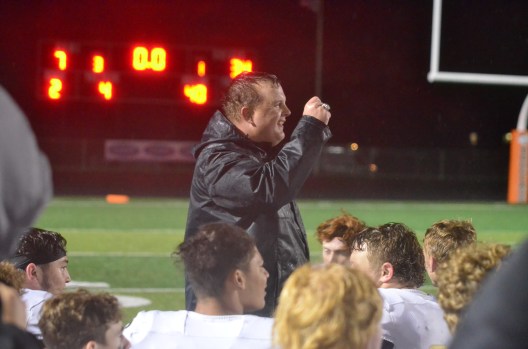 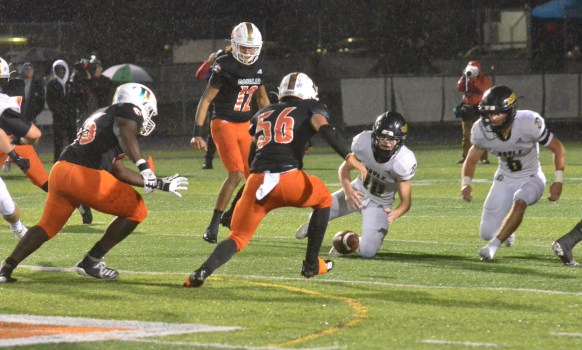 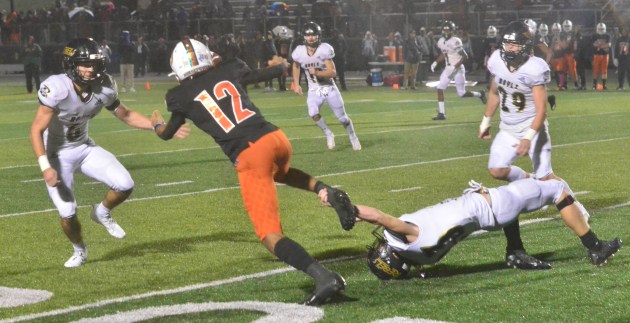 Will Alexander (right) of Boyle County forces a fumble as he attempts to tackle Frederick Douglass’ Dane Key (12) as Boyle’s Cole Lanter (6) and Dalton Stone (29) close in during the second quarter Friday. Stone recovered the ball. - Photo by Mike Marsee 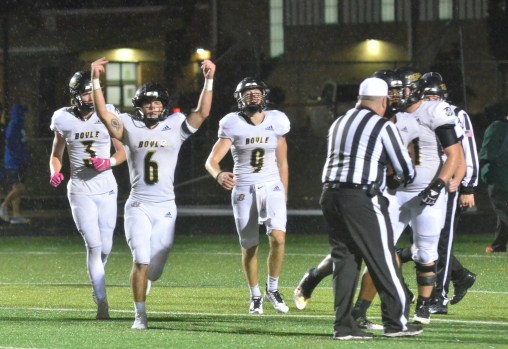 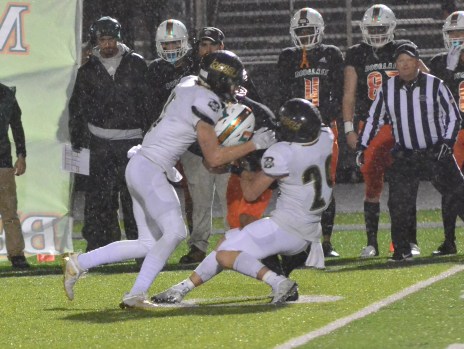 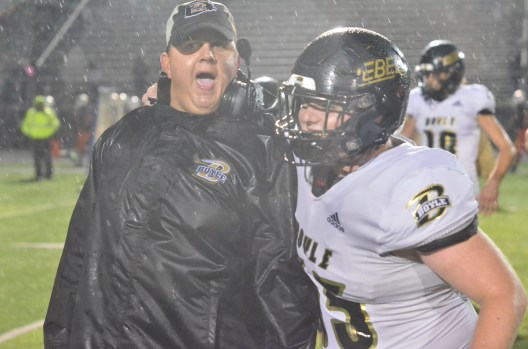 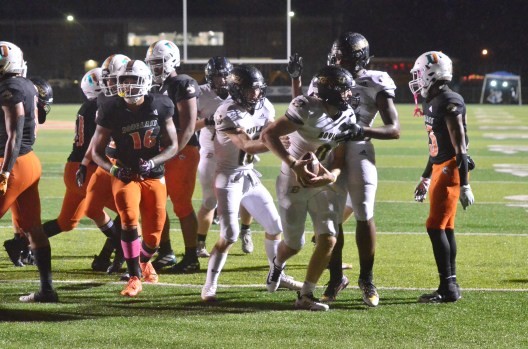 Jagger Gillis (with ball) celebrates with Boyle County teammates Avery Bodner (10) and Tommy Ziesmer after reaching the end zone on a 3-yard run during the first quarter Friday. - Photo by Mike Marsee 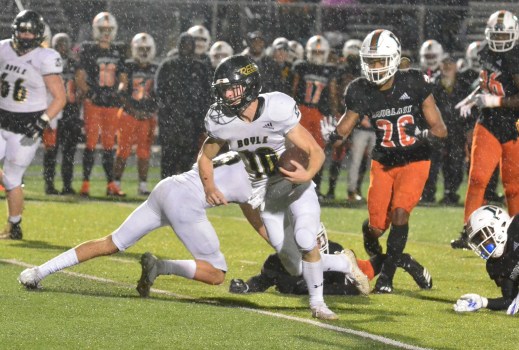 Avery Bodner (10) of Boyle County carries the ball for a 13-yard gain during the first quarter Friday. - Photo by Mike Marsee

There was plenty of doubt before the game about whether Boyle could hang in a battle between two of the top teams in their respective classes. From message boards to casual conversations, it wasn’t hard to find folks who thought Frederick Douglass had the edge.

The Rebels digested those doubts in the days leading up to the most attractive matchup of the final week of Kentucky high school football’s regular season, then used them to fuel a decisive victory that marked them as the team to beat in Class 4A.

Boyle’s 34-7 win Friday night was a statement win if there ever was one. In a game designed to prepare them for the postseason, the Rebels proved that if you underestimate them in their bid for a second straight 4A championship, you do so at your own peril.

“A lot of people doubted us. Not many people took our side. So for us to come out and make this kind of statement, it’s big time,” Boyle running back-linebacker Dalton Stone said.

Visiting Boyle (9-1) dominated the game from the start, opening a four-touchdown lead within 14 minutes. The Rebels went on to hand Douglass (9-1) its first defeat of the season, its first loss in 13 regular-season games and its worst home loss in the program’s five-year history.

In so doing, the Rebels also locked up home-field advantage for the duration of the Class 4A playoffs, which begin this week.

“This is huge for momentum going into the playoffs,” said Nate Rush, who was part of both the Boyle offensive and defensive lines that had much to do with the outcome.

Playing in a steady rain, the Rebels relied on their running game to push the ball downfield and tip the time of possession heavily in their favor. They rushed for a season-high 279 yards, which was six more than the total Douglass had allowed in its other seven contested games. (Two of the Broncos’ wins were by forfeit due to COVID-19 cancellations.)

“Most games we pass the ball a lot, and we don’t get a lot of experience running straight up the middle, but we did that tonight,” Boyle offensive lineman Austin Gorley said.

And they pestered Douglass’ pass-first offense into its worst game of the season, holding the Broncos to season lows in points, total offense (199 yards), passing yards (133) and rushing yards (66).

“Our defense is what really came in with a chip on their shoulder,” Rush said. “They had scored 50-plus on four teams, and we knew we had to play better defense. We came out and hit them in the mouth just like always.

“We came into this game with a chip on our shoulder,” Boyle offensive lineman Noah Clem said. “We knew they were the best team in 5A, and people had us down.

Boyle coach Justin Haddix said he knew the Rebels would face a challenge from a Douglass team that features a handful of players who have committed to or are being recruited by Division I colleges, but he also knew his players would thrive on that challenge and on those who doubted they were up to it.

“I think being doubted is a big thing. When people doubt us, we try to use that to our advantage,” Haddix said. “I believe in our guys, I believe in the effort they give, I love the players we have and they love playing the game.”

Avery Bodner ran for a career-high 135 yards and a touchdown for Boyle. Quarterback Jagger Gillis had a season-high 114 rushing yards and a season-low 74 passing yards, and he ran for two touchdowns and threw two TD passes to Cole Lanter.

Boyle was stopped on downs on its first offensive series but scored on its next four possessions, three of which began in Douglass territory. The Rebels ran the ball on 16 of the 22 plays in those four drives and on 53 of their 61 plays in all.

The Rebels covered 33 yards in six plays for their first score. Bodner then recovered an onside kick by Jackson Smith at the Douglass 41 and they scored five plays later on the first Gillis-to-Lanter TD pass, by which time some Douglass players were already screaming at each other on the field.

A second straight onside attempt was unsuccessful, but two plays later Sage Dawson intercepted a pass and returned it 53 yards to the Douglass 37 to set up a rushing touchdown by Bodner on a 2-yard run.

Gillis threw only one more pass — a shovel pass — the rest of the way, finishing the first half and the game 6 for 8. Lanter caught five passes for 70 yards.

The Rebels ran the ball on each of their 22 snaps in the second half, getting 65 yards from Gillis, 54 from Bodner and 41 from Stone.

They scored once more midway through the third quarter before Douglass answered with a 13-play, 65-yard scoring drive, and they had the ball for about 14 of the last 14 1/2 minutes and ran out the final 5:23.

Douglass had two turnovers and only two first downs in the first half, and it didn’t get past the Boyle 35-yard line until its third-quarter scoring drive, which included three straight fourth-down conversions.

“I think the weather and us playing some of the best defense weve played all year really helped us out a lot,” said Stone, who had a game-high nine tackles.

The Broncos drove to the Boyle 2 on their next series but were stopped on downs at the 7, triggering the last in a series of emotional celebrations that punctuated the Rebels’ biggest plays.

Boyle’s coaches and players let their emotions show all night long, led by Haddix, who was as demonstrative on the sideline as he has been all season.

“Football’s an emotional game. You can’t play it with kids who are laid back,” Haddix said.

Stone said all of that emotion served the Rebels well.

“The emotion brought us all together, and I think we all played as a team tonight, we all played as one,” he said. “Before we even got on the bus everybody had that look in their eye and they were just ready to get here and play. Even through warmups, we were just wanting to play. We were waiting for the clock to hit zero and ready for that score to be like it is right now.”

Even if it wasn’t the score many were expecting.

Extra points: At least three Boyle defenders — Dawson, Lanter and Will Alexander — had pass breakups in the end zone. Alexander also forced a fumble that was recovered by Stone late in the second quarter. … Stone’s recovery led to a 54-yard field goal attempt by Smith that was blocked as time expired in the first half. …

Douglass quarterback Samuel Cornett was 13 for 27 for 133 yards. Dane Key, the wide receiver who announced his commitment to Kentucky a day earlier, caught four passes for 71 yards.

The numbers game: Based on statistics submitted by schools, Lanter finished the regular season ranked first in the state in receiving yards (990) and touchdown receptions (17) and tied for first in total receptions (57) and tied for 13th in total points (126). Gillis is 10th in passing yards (1,863) and 11th in passing touchdowns (21). Smith is tied for eighth in both field goals made (5) and extra points made (46). Tommy Ziesmer is tied for fifth in fumbles forced (4). Boyle is 10th in average scoring margin (28.3).

Playoff week one: Boyle opens the Class 4A, District 5 playoffs against Anderson County, which it defeated 56-0 less than three weeks ago in Lawrenceburg and which it has beaten four times over the past three seasons by a combined score of 226-21.

The game will be played Thursday at Rebel Stadium. It is one of 14 games statewide scheduled for Thursday after the KHSAA asked schools to consider playing first-round games a day earlier due to an ongoing shortage of officials.
Boyle and Anderson met in the first round of the playoffs in 2019 and would have done so last year, but the game was canceled by Anderson due to issues related to COVID-19.

In their meeting this season, Gillis threw for 249 yards and five touchdowns before leaving the game at halftime with the Rebels up 48-0. Since then, the Bearcats have lost to Lexington Catholic 50-0 and to Shelby County 30-16.

The winner of Thursday’s game will play the winner of the Bourbon County-Lexington Catholic game for the district championship Nov. 12.

Boyle is assured of playing at home in any playoff game prior to the state finals because it finished No. 1 in Class 4A — and fourth overall — in the KHSAA’s Rating Percentage Index standings. The RPI will be used to determine matchups and host sites for the third and fourth rounds.