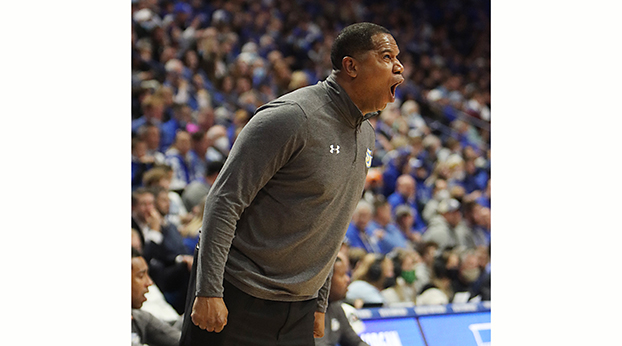 Southern University, led by former Kentucky guard Sean Woods, walked into Rupp Arena with the same mindset as their Southeastern Athletic Conference counterparts on Tuesday night and gave the No. 10 Wildcats (7-1) all they could handle before Calipari’s squad escaped with a 76-64 win over the Jaguars.

“Thank goodness we won,” Calipari said. “They played harder than us. Sean did a better of coaching his team than I did. … of all the tapes I watched, they never stopped, it didn’t matter what the score was — just like (they did) today. … They played today and they competed.”

The contest was the first in a sequence of Unity Series games against teams from the SWAC during the next five seasons. Southern (3-6) was first up for the Wildcats and Calipari was thankful his team didn’t encounter a winless Texas Southern squad that had nothing to lose and everything to gain in a win over the Gators, one of Kentucky’s top foes in the Southeastern Conference.

Woods knew the Wildcats “would be ready” after Texas Southern stunned the college basketball world with its upset of the Gators on their home court.

“He probably got them up in the middle of the night (to let them know),” Woods said.

Like Calipari, Woods took notice of Texas Southern’s upset victory, the first SWAC school to beat a ranked school in conference history, and used it as a motivator for his own squad against a program that made Woods “the man and the coach I am today.”

Woods, who is Kentucky’s career assists and steals leader, was a key member of the 1992 “Unforgettables” that fell to Duke 104-103 in the 1992 NCAA tournament game that many call the greatest game in college basketball history.

Woods credited his team for “answering the bell” in an environment he came to know fully well as a player during his collegiate career.

“I thought my team was good enough and it showed tonight that we are capable — a few possessions here and a few possessions there — of actually having a chance to win the basketball game,” said Woods, who is 0-4 as a coach against his alma mater. “They came in thinking that way … that’s the way I want them to think. Every night we feel we can win a basketball game.”

As he has done nearly all season, Oscar Tshiebwe stood tall for the Wildcats, despite playing just 10 minutes in the first half because of foul trouble. In limited duty, three Kentucky forward managed just five points and three rebounds during the first 20 minutes, but made his presence known in the second half. Tshiebwe finished with 23 points and 11 rebounds in recording his seventh double-double of the season. He added four blocks to his tally and was clearly the difference-maker as the Wildcats pulled away in the second half.

“I thought Oscar was the difference down the stretch,” Woods said.

Although Calipari warned his team against taking the Jaguars lightly, Kentucky freshman guard TyTy Washington and the rest of his teammates were prepared for the task at hand.

“Anybody can beat anybody on any given day,” Washington said. “It’s college basketball at the end of the day. We just come up with the same mindset as if we are playing Duke or somebody.”

The Wildcats did just that against the Jaguars, especially in the second half when it mattered the most.

Southern closed to 57-51 before Tshiebwe and Washington combined for nine points to make it 66-53. Kentucky could never pull away in the team’s closest victory this season after a run of lopsided games.

“I wanted my head to stay in the game,” said Tshiebwe, who finished with four fouls and sat for several minutes in the first half. “Coming back, I was kind of with the mentality of win the game and be careful. Coach told me that if you see you cannot get it, don’t reach, just go back.”

Howard delivers on expectations for Kentucky