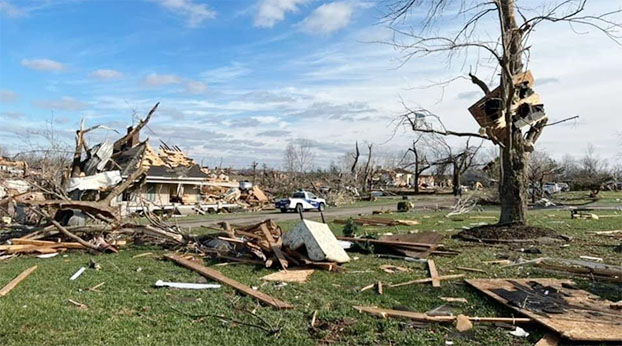 Kentucky’s death toll from last weekend’s tornado and severe weather outbreak has now risen to 76 after searchers found the body of a missing 13-year-old girl on Thursday who had been killed in Bowling Green early on Dec. 11.

Nyssa Brown was the final person in Bowling Green that had not been accounted for after the deadly storm, police said. Her mother, father, three siblings, and grandmother also died in the tornado.

The number of injured is at 138, Gov. Andy Beshear said during a Thursday afternoon press briefing at the state Capitol.

“The number missing appears to be down to 16, which is good news,” he said.  That is primarily in Hopkins County – 15 – but, remember, we only know if someone is missing if they’ve been reported missing.”

While there are eight Kentucky counties that have qualified for major disaster declaration status, meaning the federal government pays up to 75% of costs associated with repairs, Beshear said he asked the feds pick up all of it for the first 30 days.

He received a reply when President Joe Biden visited western Kentucky on Wednesday.  “The President told me personally, the answer was yes.  He actually said when the request came in that he didn’t know if he had the legal authority to do it.  It turns out he did, and he said yes.”

Beshear says the 100% cost share will include, “Assistance for debris removal, emergency protective measures, and direct federal assistance.  That is going to be a huge amount of money, and will free up other dollars for us during the months and years to come.”

In addition, a request to expand the number of covered counties to 20 has gotten verbal approval, but the state is still waiting for the paperwork to be signed.

FEMA now has more than 700 people in Kentucky, according to the governor, including those in the field and others operating out of Frankfort, getting aid to those who need it. “I think it is one of the biggest, most robust responses that we have seen,” he said.  “We have already gotten 5,500 registrations in the system, and they have already made payments.  We have at least $550,000 that’s gone out the door, and we’re only on day six.”

Beshear reported there are 610 people who lost their homes who are staying at Kentucky State Resort Park lodges in the area.  While the original plan was for them to stay at the parks for two weeks or more, he says that has now been raised to at least a month.

The number of Kentucky National Guard soldiers and airmen is now nearing 600 deployed to the area, he says, many of whom are now augmenting law enforcement in traffic control, performing wellness checks, and to prevent looting.

Beshear said the Team Western Kentucky Tornado Relief Fund has grown to nearly $16 million in private donations.  The first expenditure is $5,000 for each victim to assist in burial expenses, but he is looking at helping those who lost their homes and have no insurance.  “Because individual assistance from FEMA is capped at $37,900.  That can go above your insurance coverage, but for those that don’t have it, that’s not going to be enough to rebuild.