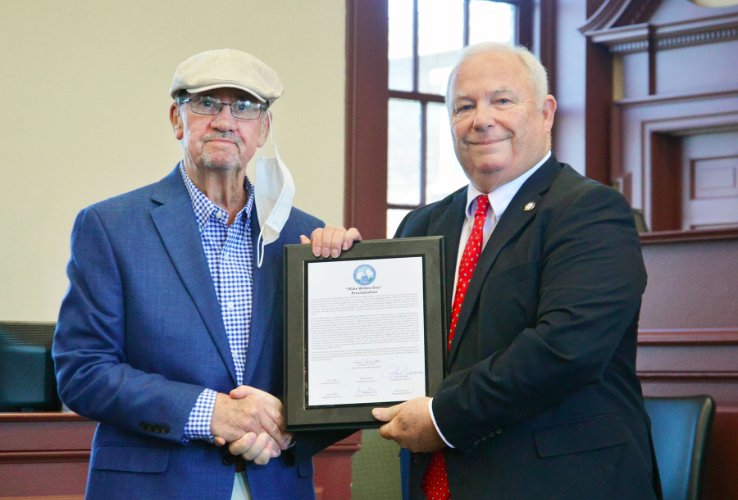 Boyle County Emergency Management Agency (EMA) Director Mike Wilder is retiring at the end of the year. He is also retiring as deputy coroner after 40 years and running for coroner next year.

After serving eight years in the EMA position, Wilder felt that at age 74, it was time for him to take a step back. He is also battling health issues, but had decided to retire this year prior to knowing about his heath issues.

Wilder was the first director of that agency when it was called disaster and emergency services in the 1980s.

During his time at EMA, Wilder helped with the gas line explosion in Lincoln County in 2019, when one person died and homes were destroyed from a major pipeline explosion. Most recently, he helped mitigate the five-tornado disaster that came through Boyle County Dec. 11.

“Kind of going out with a flash, aren’t I?” he said about the tornado disaster.

EMA mostly helps with weather-related emergencies. Wilder said he is proud of the early storm warning system he helped introduce. Called code red, the system gives people a phone call in the event of severe weather.

“I’ll miss all of it; I’ll miss coming right here in this office every day because I like to be around people,” Wilder said. “Being around the people and all the different first responder agencies, helping coordinate issues that happen and making sure they have all the resources they need to mitigate any situation.”

Wilder was in the funeral home business most of his career. He owned Wilder Funeral Home in Perryville, now called Walden Funeral Home after Wilder sold it.

He served 40 years as deputy coroner under four different county judges. The county coroner is a constitutional office, and the coroner appoints their deputies. In Boyle County, local funeral home directors have been appointed deputy coroners.

Coroners are responsible for people who died that were not under a doctor’s care. They sign death certificates and determine the cause and manner of death.

Local doctor Don Hamner is the current coroner. After serving two four-year terms, Hamner is stepping down from the position and urged Wilder to run for coroner next year. Wilder did not originally plan to run for coroner, but decided to from Hamner and others’ encouragement.

“It’s a job that’s not sought after a lot; it’s kind of a job that stays in the background and you never want to see the coroner,” Wilder said.

When asked why he wanted to run, Wilder said he thought it should be someone who has the training and experience in death investigations.

“There’s no one who is trained to be coroner in the county except Dr. Hamner and myself,” he said.

Currently he will be running unopposed, but citizens have until January to announce their candidacy.

Wilder is also deputy state coordinator for the Kentucky Mass Fatality group, which helps coroners from other counties when they’re overwhelmed from mass fatalities. Coroners from the group helped the counties in western Kentucky that experienced fatalities from the tornadoes Dec. 11.

Throughout his career, Wilder assisted coroners with the Carrollton bus collision in 1988, which killed 27 people. He went to Louisiana when Hurricane Katrina hit, and helped with the Comair Flight 5191 plane crash in Lexington, which killed 47 passengers in 2006.

“I don’t enjoy being deputy coroner so to speak; it’s a position that has to be filled, and it’s a matter of being available and being able to offer service to families,” Wilder said. “They want answers to deaths of their loved ones and I have that ability through toxicology and autopsies to help give families answers.”

If elected coroner, Wilder will have two capable deputies helping him out.

“I hope that the people in Boyle County will choose to let me serve in that capacity,” he said.

In this retirement, Wilder hopes to play golf and travel to Florida with his wife to see relatives. He’s looking forward to spending more time with his two grandkids, who are active in baseball and basketball.