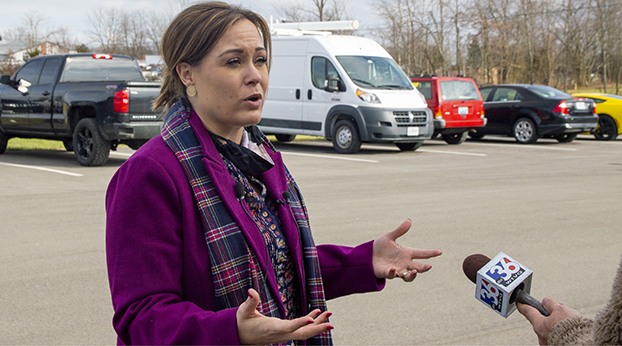 Lt. Governor Jacqueline Coleman, who grew up in Mercer County, came to the Danville-Boyle County airport to survey damage and speak about recovery efforts. - Photo by Fiona Morgan

Kentucky Lt. Governor Jacqueline Coleman came to the Danville-Boyle County Airport for a presentation about its damage and other damage in the county Tuesday.

During the presentation, officials revealed that five tornadoes came through Boyle County. The EF-2 tornado at the airport caused the most damage. Airport wreckage is already mostly cleaned up, but debris throughout the county remains.

Coleman viewed maps of where each tornado hit and saw photos of the airport taken the day after the storm.

“The drone footage, I think, gives a pretty all-encompassing view of what a powerful storm that came through even if just for a blip in time here in Boyle County and the destruction that it did in the blink of an eye,” Coleman said.

Boyle County Judge-Executive Howard Hunt said since the tornadoes went through residential areas, they are lucky they did not cause more damage than they did.

Gov. Andy Beshear has requested to FEMA and the White House that Boyle County be added to the major disaster list. If added, the county would be eligible for federal disaster relief funds. Coleman and Hunt are confident that the county may be added soon.

“It definitely needs to be [added],” Coleman said. “There’s destruction everywhere, but we need to make sure no matter what the level of destruction, that you get what you need.” 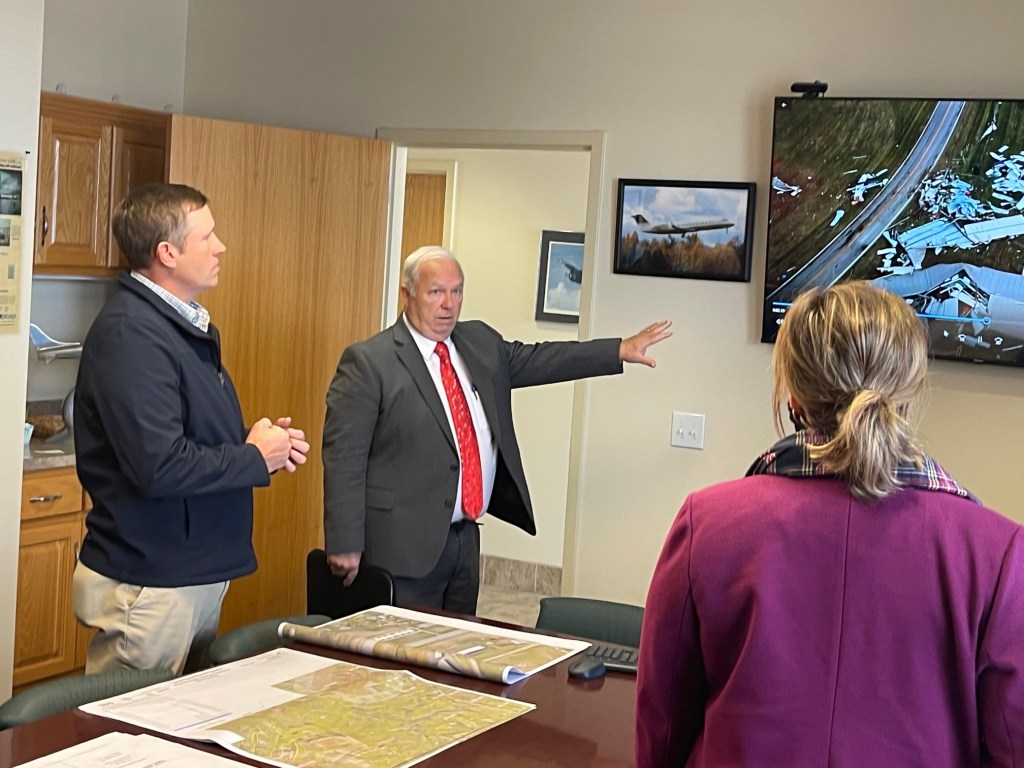 Hunt thanked Coleman, adding, “We’re just hoping that comes back soon so we can get started on recovery; it’s real important to the airport and all those homes and businesses around, and we thank you for all your support.”

Coleman grew up in Mercer County and went to Centre College in Danville. Coming back after the tornadoes, she said the damage was hard to see.

“It’s a little jolting to see a place that is a staple of a community, I mean [the airport] is something that has always been here, that you thought would always be here, and to see the damage that was done to it is a little jolting,” she said.

Recovery at the airport started the day after the storm. Danville construction company Doss and Horky came in and brought help from other counties to clean up the wreckage from three destroyed airport hangars.

The National Guard and the 103rd Brigade Support Battalion in Harrodsburg did security work at the airport’s perimeter where the fence was destroyed. Workers then put up concertina wire around the perimeter.

In a little over a week, workers managed to clean up almost all debris at the airport. The airport was only closed for 24 hours, and is now fully open and accepting airway traffic.

“The fact that this much progress has already been made in terms of clean-up is remarkable,” Coleman said.

Danville Airport Operations Manager Nick Barker said they hope to rebuild the hangars within a year, and would like to have everything back in place by next fall.

In speaking about the damage in western Kentucky, Coleman said people there have been hugely supportive of each other.

Having some friends that were close to hard-hit areas, she said those people that survived the worst of it have even more of a commitment to help their community.

“You have to see [the damage] to understand it, and even when you see it, it’s hard to do it justice,” she said. “But I will say that what we saw is what I would call the worst of mother nature, but it brought out the best in our human nature.”

She continued, “It’s this odd combination of destruction and despair, matched with gratitude, inspiration, and compassion. I would never hope that anything like this would have to happen to see that out of folks, but I can tell you that the people in western Kentucky are so grateful to their community, the Commonwealth, the country, and the world.”