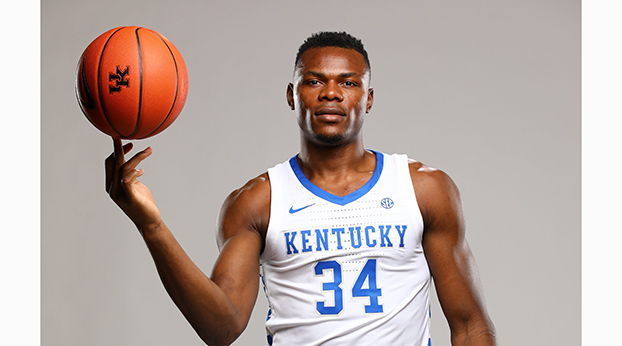 Oscar Tshiebwe doesn’t consider himself a machine and doesn’t mind being called a beast but he’s not shy about his most dependable source of energy.

“I am not the tallest guy, but I have (a) big heart,” he said. “When you need something, it does not matter how big you are. My God said everything is possible. He did not say for certain people, he said to everybody. When you go for it, you’re going to get it. If you don’t go for it, they’re not going to bring it to you.” 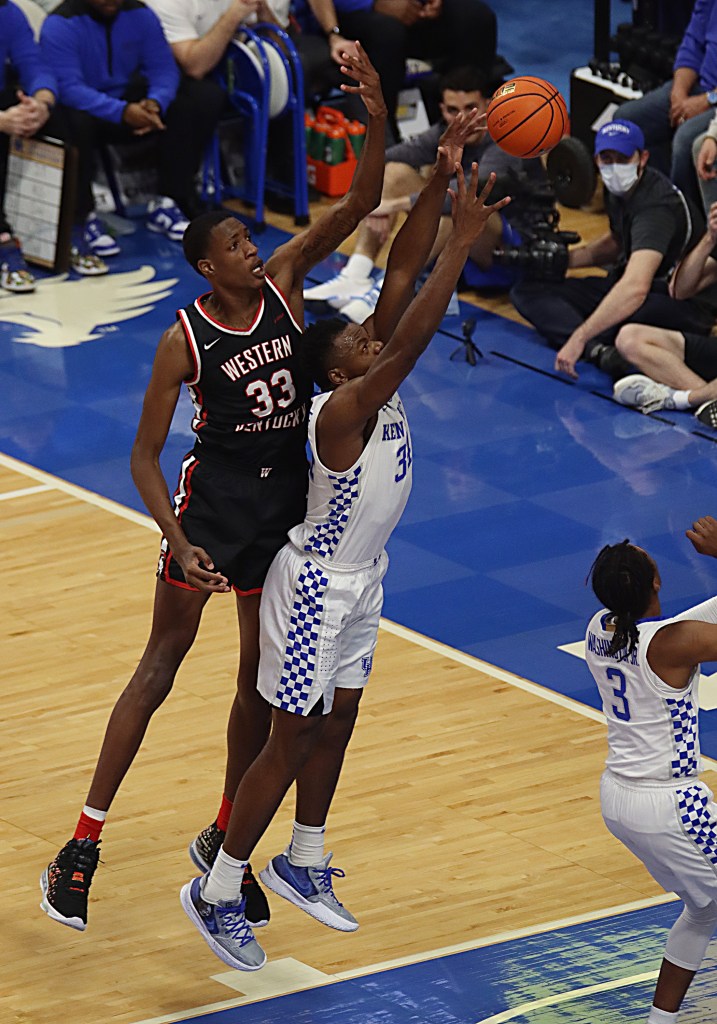 Oscar Tshiebwe grabs one of his record 28 rebounds in a game against Western Kentucky. He gives all praise to God for the ability to do what he does on the court. – Photo by Jeff Moreland

The Kentucky forward linked his success to God after he shattered the single-game rebounding record at Rupp Arena with 28 boards in a 95-60 win over Western Kentucky on Wednesday night. He broke the previous mark of 21 set by Shaquille O’Neal set in 1990.

Tshiebwe’s teammates had a celebration for their teammate when he entered the locker room after his record-breaking performance and what awaited was another first-time experience on the same night.

“It was amazing to see my teammates celebrate and pour water on me like that,” he said. “They called me ‘The Machine.’ I think you can call me a peaceful little guy. I don’t think I qualify as a machine yet. Coach Cal let me go for those three. Then if I go out with 30, maybe you can call me the machine. But right now, probably call me a beast. Got it?”

In an era when some players are more concerned about their own self-gratification than team celebrations, Tshiebwe gets it and it shows in his speech, demeanor, and effort on and off the court He is a throwback to the past when rebounding was just as much an art in the sport of basketball as three-pointers are in modern times of collegiate basketball.

Kentucky hasn’t seen a rebounding robot since the 1950s when Bob Burrow (1955) and Bill Spivey (1951) each grabbed a school-record 34 rebounds when tall centers once roamed the paint.

From start to finish, Tshiebwe’s eyes on are the rim anticipating the next missed shot on both ends of the court. His concentration against the Hilltoppers was mostly on defense where he snagged 23 on the defensive end, limiting Western’s second-chance opportunities.

“When I came here, I told everybody, I told the coach: I don’t care about points. I am going to get my points, but I just want to go out and grab every rebound and fight to get the rebound,” he said. “When I get 20 rebounds, I give more possessions. It might seem that it is helping us to win again. That’s one thing I did the best (Wednesday) and we got a victory. For me, it’s all about victory. That’s what I am there for.”

For Tshiebwe, rebounds enable him to “come out with something good” and that means rebounds on both ends of the floor.

“When you stop fighting, that’s where you cannot get what you’re looking for,” he said. “I never stop fighting. I am always fighting until the time is up.”

Tshiebwe credits God for his successes on the court and has remained humble in his first season with the Wildcats.

“I am so blessed,” he said. “God has been so good to me because I run better, and I move better. And I have morals. I give thanks to God for about every single day in my life for everything that God has blessed me with. So, I will keep doing the best I can to glorify his name and to thank him for everything. And I got to do the things I got to do to help this team.”