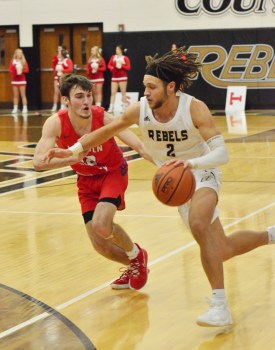 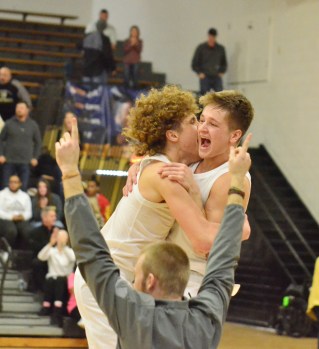 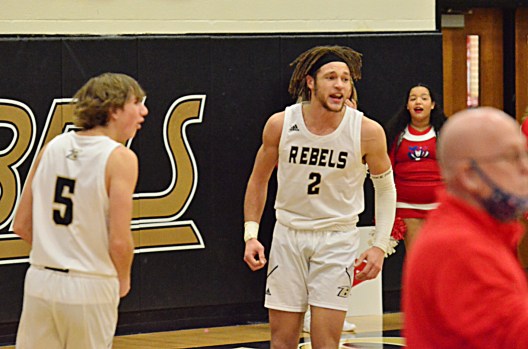 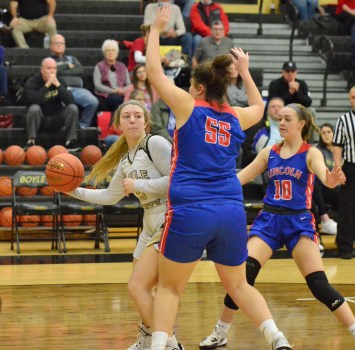 Ella Coffey of Boyle County passes the ball through the lane around Lincoln County’s Emily Estes during the third quarter Friday. - Photo by Mike Marsee 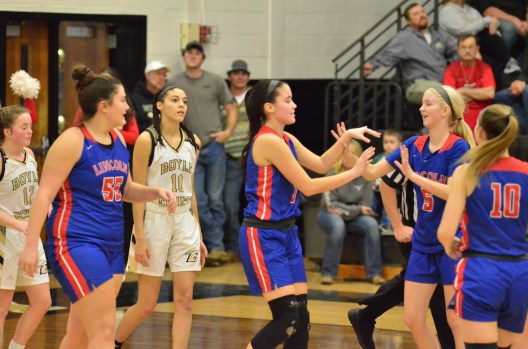 The reconstruction of the Boyle County boys will continue for a few more weeks, but there was a moment Friday when the Rebels could pause to admire their work.

That moment arrived soon after Luke Imfeld’s long 3-point shot went through the net with four seconds left, giving Boyle a 43-40 victory over Lincoln County in the first meeting of the season between the teams that played for the 12th Region championship last season.

The Rebels said their come-from-behind win is a good indication of how things have been coming along as they try to put themselves in position to repeat as regional champions.

“We had guys step up and make plays when we needed them to, and the best thing about it is we’re not even at full potential yet,” Imfeld said.

Host Boyle rallied from a 12-point first-half deficit to win round one in the battle between two of the teams ranked among the top three in the 12th Region.

The Rebels are a different team than the one that went to the Boys Sweet 16 last year, and coach Dennie Webb said they still have much work to do to prepare for the postseason. But he said this win shows what they could be capable of.

“We’re still a work in progress, but we’re coming along,” Webb said.

Ten of those points were unanswered in a span of just over 90 seconds in the third quarter as he hit two 3s and two baskets in transition to help the Rebels rally from a 27-17 deficit early in the second half to tie the game at 27-all.

“We needed points, we needed to get the lead back,” Imfeld said. “Coach trusted me with the ball, so I just made the plays.”

Webb said he’s convinced Imfeld is the top player in the region and he obviously had the hot hand in the second half, and he said the contributions of other players reflected the selflessness the team has shown all season.

“Luke is our scorer and everybody knows it … but the other guys do a lot of nice things, and that’s what I’m proud of,” he said. “They don’t care who’s getting 25, they’re going to do what I’m asking them to do to help us win.

After Lincoln’s Tramane Alcorn tied the game at 40-all with a layup at :33, Imfeld dribbled out most of the remaining time before he fired the winning shot from the “R” in the “Rebels” logo, at least 3 feet behind the 3-point line and over the outstretched arm of Alcorn.

Jaxon Smith got off a hurried 3-point shot for Lincoln (14-5, 1-1) ahead of the final buzzer that missed the mark, giving the Rebels their fourth win in their last five games against the Patriots.

Lincoln shot 61 percent from the field in the first half to take a 25-15 lead to the locker room.

“There was no yelling and screaming at halftime,” Webb said. “I thought that we played some pretty good defense and they made some shots with hands in their face, and hats off to a kid that can do that.

“The biggest talk we had was about rebounding. The emphasis at halftime was getting to the glass, and they did.”

Boyle outrebounded Lincoln 15-5 in the second half to finish with a 22-17 edge on the boards, led by Imfeld with seven boards and Jakei Tarter with six.

Hagan Webb had 10 points for Boyle, which extended its winning streak to five games with a 59-54 win over Madison Southern on Saturday.

The Rebels and Patriots will meet again Feb. 4 in Stanford and perhaps once or twice more in the postseason.

“I hate prepping for them, but then I love playing against them. It’s just so much fun because they do so many things well,” Dennie Webb said. “They’ll be ready next game. It’ll be another dogfight, and hopefully we can compete again.”

For at least three weeks, the bragging rights belong to Boyle.

“This says that we’re still here, we’re defending champs,” Imfeld said. “But there’s a lot more to go. We’re probably going to see them two, maybe three more times this season, but it’s a really good steppingstone to get us going.

“All the respect in the world for Lincoln County. They’re going to come back even more fired up.”

Ralston scored 14 points for the Lady Patriots, who trailed for most of the game before overtaking the Lady Rebels in the fourth quarter.

Lincoln’s Taylen Ralston tied the game at 31-all with a 3-point basket with 1:18 remaining. The Lady Patriots regained possession with 44 seconds left after a Boyle miss and used three timeouts before Chloe Ralston got to the basket for the winning shot.

Lincoln survived a scoreless second quarter in which it attempted only five shots and trailed 15-8 at halftime.

Boyle’s lead grew to 24-11 in the third quarter, but Chloe Ralston hit consecutive 3s — one of which led to a four-point play — to trim the margin to six points.

The Lady Patriots scored 10 unanswered points while holding the Lady Rebels scoreless for 6:47, and they took their first lead since the first quarter at 28-27 lead on Alexia Baldock’s layup with 3:20 to play.

Lincoln shot 46 percent from the field but had only 24 attempts and posted its lowest winning score of the season. Boyle had more attempts (36) but shot 31 percent.

Payton Bugg scored 16 points to lead Boyle, which had only six turnovers.

Taylen Ralston had nine points for Lincoln, which went 0-3 against Boyle last season.