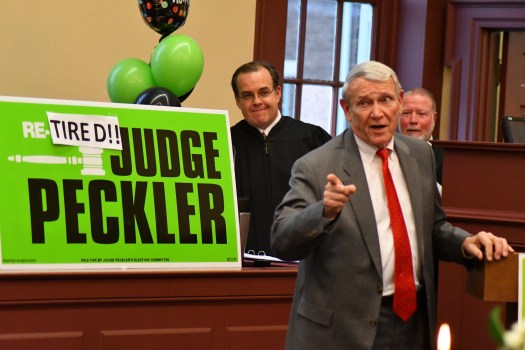 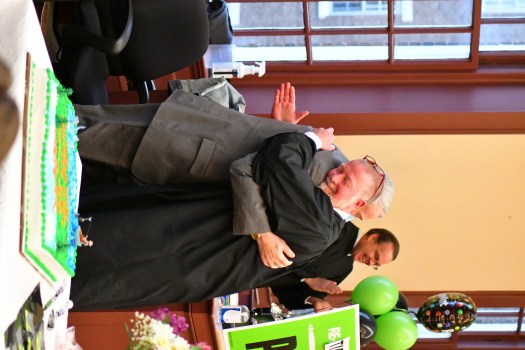 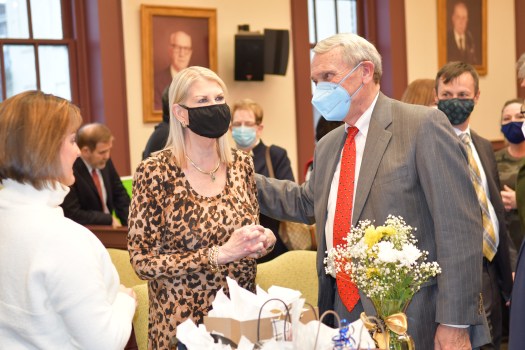 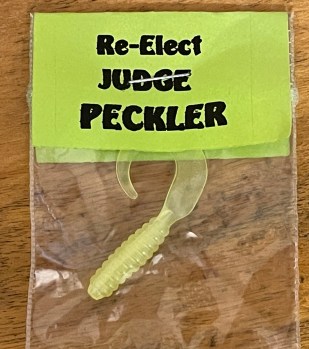 Chief Circuit Judge Darren Peckler has retired, and he plans to do more fishing in his spare time. Pictured is one of the fishing baits Peckler used as an election giveaway for one of his campaigns for re-election years ago. - Photo by Jeff Moreland

Chief Circuit Judge for the 50th Judicial District Darren Peckler retired on Jan. 31, less than a year before his term ends. At the age of 74 and with recent health issues, Peckler decided not to run for re-election this year. He said he is stepping down early to allow whoever takes over to get some experience in the position.

“I wanted to give the person who might want to take this job an opportunity to be appointed to this position to get some experience in this job before the election occurs in November,” Peckler said.

The mostly likely person to finish his term is Chief District Judge for the 50th Judicial District Jeff Dotson. He is also currently the only person filed to run for circuit judge this year.

“As a district judge, he has trial experience to know how to do what needs to be done here,” Peckler said. “I’ll be happy to see that come about.”

Peckler has been a judge for Boyle County for more than 46 years. In 1975, he was one of the last Danville city police judges. A constitutional amendment eliminated the job of police courts in 1976.

With the creation of district and circuit courts, Peckler became the first district judge for Boyle and Mercer counties in 1978. He stayed in that position until 1999 when he ran for circuit court and won.

“It’s been an honor and a privilege to have done this,” Peckler said. “I’ve cherished every minute of every day I’ve been able to do this, and I’m thankful to the people of Boyle and Mercer County that have helped me stay in this position and do this for them.”

One thing Peckler is most proud of accomplishing in his career is the substance abuse treatment and rehabilitation probation program he started in 2000.

He modeled the program after state drug courts since Boyle and Mercer counties do not have a drug court.

Drug courts do not work with the individual struggling with substance abuse until after they are convicted of a crime. Peckler, along with probation and parole officers, identifies candidates for the program before conviction.

For example, if someone completes a short-term rehabilitation program before trial, the judge can present that information to prosecutors, who then usually offer better plea bargains. After trial, they are eligible for Peckler’s probation program.

Peckler personally meets with participants in the program once a month, and probation officers and counselors meet with them between two to four times a month. Participants are drug tested at least every other week for six months, and then randomly until the program’s end.

Peckler said they’ve had a great success rate, most participants graduate, and most of those graduates do not reoffend. He is also proud of helping convince the chief justice to start a family court for the circuit. Bruce Petrie is now judge of the family court.

“We tried to watch out for our citizens to keep them safe, to try to help those who were in trouble to get out; some you can help and some you can’t, but we make an effort to keep this system running as smoothly as possible,” Peckler said. “I’m proud to have been a part of any and every case that we’ve had.”

He said that no case stands out to him above the other, and that each case was as important to him at the time as it was to the people involved.

“What I tell younger judges, when you start, don’t go to parties or gatherings and start telling stories about what happened in court or what you thought was funny, because you’ve got to remember, those are probably the worst days of somebody’s life,” Peckler explained. “To come into your court, one side or the other, they’re having a very bad day, and there’s certainly nothing that they see about any of that that is humorous.”

In retirement, Peckler is hoping to travel and be able to go fishing more often. When asked about what he will do specifically, he said, “Whatever my wife says.”

He and his wife have been married 52 years. They have two daughters and one granddaughter. One daughter in Virginia works for a historical preservation firm; the other is a relief veterinarian, who also owns a farm raising cows and sheep.

That daughter, who lives in Bourbon County, just bought a farm in Mercer County to be closer to family. Peckler looks forward to spending more time with family and maybe helping his daughter with the farm.