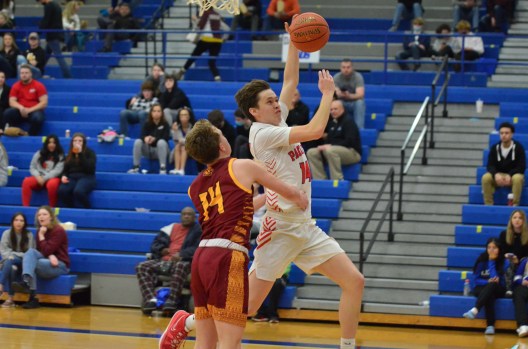 Colton Ralston of Lincoln County drives past Garrard County’s Zachary Felkins for a shot during the third quarter Wednesday. - Photo by Mike Marsee 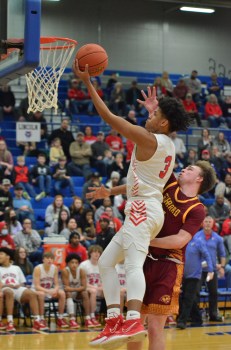 Tramane Alcorn (3) of Lincoln County gets past Garrard County’s Zachary Felkins for a layup during the third quarter Wednesday. - Photo by Mike Marsee 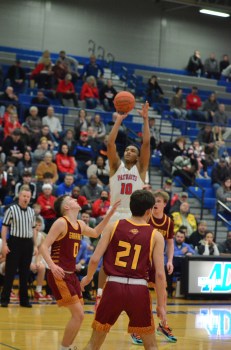 Jaxon Smith (10) of Lincoln County launches a jump shot over the Garrard County defense during the third quarter Wednesday. - Photo by Mike Marsee

The Lincoln County boys got just the kind of start they were looking for.

Lincoln hit the ground running Wednesday night, hitting shots and getting stops and eliminating the risk from its elimination game.

The Patriots raced out of the gate and kept their foot on the gas pedal as they drove past Garrard County for a 74-52 victory in a 45th District Tournament semifinal at Danville.

“It’s always important to get off to a good start, and I thought we did that on both ends of the floor and did some good things,” Lincoln coach Jeff Jackson said.

Lincoln (25-7) rolled into the district final, where it will face Boyle County at 7 p.m. Friday. The Patriots, who will be trying to win their fourth consecutive district title, also clinched a spot in next week’s 12th Region Tournament.

The Patriots went 8 for 10 from the field in the second quarter and finished the first half 15 for 23. They were still shooting 62 percent (24 for 39) through three quarters before finishing at 53 percent.

“I thought we moved the ball well, made the extra pass, and we got on the glass a little bit and got some putbacks,” Jackson said.

Tramane Alcorn went 10 for 12 from the field and scored a game-high 24 points to lead four Patriots in double figures.

“They’re going to make runs, and we’ve got to respond to them, and we missed a lot of easy buckets whenever we were trying to respond,” Cooper said. “If you can’t stop them on one end and then you’re struggling to get the ball down on the other end, it’s hard to maintain against teams like that.”

Evan Smith scored five points in the opening salvo, and Ralston hit a pair of difficult jump shots in the final minutes of the first half to help Lincoln build a 40-28 lead.

The Golden Lions couldn’t make any headway at the start of the second half, cutting its deficit only to 10 points. Ralston scored six points and Alcorn and Jaxon Smith had four each in a 17-4 run that gave the Patriots their largest lead at 69-40 with 5:38 to play.

The Lions finished with a losing record for the sixth consecutive year, but Brandon Cooper said the learned a great deal this season about what it will take to end that streak.

“We know where our issues are. We’re hitting the weight room on overdrive, because we know we’ve got to get a lot stronger,” he said. “I’ve got a lot of young kids that are fired and ready right now.”

He said that’s also a point of progress for Garrard.
“I know they want to win,” Brandon Cooper said. “That’s the big thing, if you’ve got a group of guys that want to win and are willing to do whatever it takes …. and we’ve got a lot of that right now.”

Lincoln will return to Danville on Friday for what Jackson said should be a charged atmosphere for the title game against Boyle. The Patriots and Rebels played in both the district and regional finals last season, with Lincoln winning the former and Boyle winning the latter.

“It’ll be a great challenge, and we’re looking forward to the challenge,” he said. “It’s always fun when we play them, and I’m sure Friday night will be no different.”