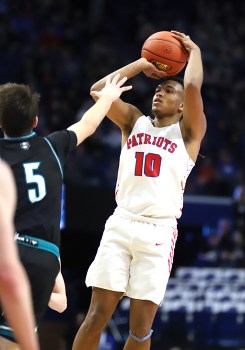 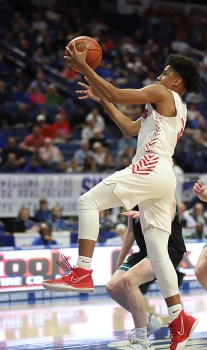 Tramane Alcorn drives to the basket in a second-round game of the 2022 KHSAA Sweet 16 at Rupp Arena in Lexington. - Photo by Jeff Moreland 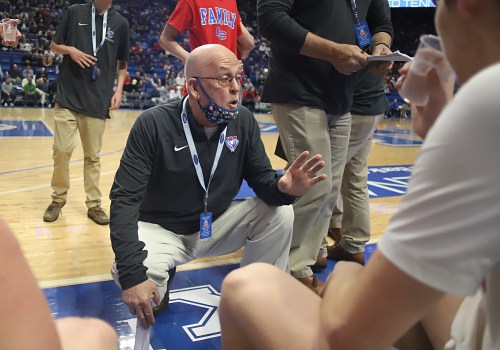 Lincoln County head coach Jeff Jackson instructs his team during a fourth quarter timeout in Friday’s game against North Oldham in the 2022 KHSAA Sweet 16 at Rupp Arena in Lexington. - Photo by Jeff Moreland 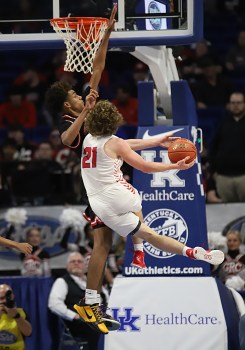 Clayton Davis drives to the basket against GRC’s Jerone Morton in the 2022 KHSAA Sweet 16 state semifinals at Rupp Arena in Lexington. - Photo by Jeff Moreland 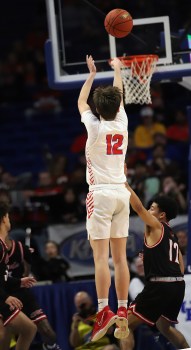 Colton Ralston launches a three-pointer in the 2022 KHSAA Sweet 16 state semifinals against GRC at Rupp Arena in Lexington. - Photo by Jeff Moreland

The Lincoln County Patriots pose with their trophy after reaching the semifinals of the 2022 KHSAA Sweet 16 at Rupp Arena in Lexington. - Photo by Jeff Moreland

After advancing to the KHSAA Sweet 16 Boys’ State Basketball Tournament, the Lincoln County Patriots made quite a showing on the state’s biggest stage.

Lincoln played the tournament’s first game Wednesday morning and defeated 6th Region champion Jeffersontown 45-41, led by Jaxon Smith with 14 points and Colton Ralston with 12. Ralston hit the big shot to win the regional championship for the Pats, and he came through again in the state tournament. The Patriots were behind 41-39 with 53 seconds left in the game when Ralston drained a deep 3-pointer to take the lead at 42-41. Smith sealed the deal with three free throws down the stretch, and the Patriots advanced to the second round.

Next up was North Oldham, champions of the 8th Region. The Patriots picked up another win, this time with less late-game drama, knocking off the Mustangs 56-46. Tramane Alcorn paced the Patriots to victory with 15 points, while Smith and Ralston added 11 and 10 respectively to send Lincoln County to the state semifinals in a Saturday morning match-up with 10th Region champs and the favorite to win the state title, George Rogers Clark.

In the semifinal match-up Saturday, GRC jumped out to a 13-6 lead to close out the first period, and led 23-14 at the half.

The Patriots outscored GRC 15-8 in the third period and trailed by just two points, 31-29, heading into the fourth quarter. After a hard-fought period of back-and-forth scoring, GRC took a narrow lead at 38-37 when guard Sam Parrish hit a 3-pointer with 1:30 left to play.

Alcorn was fouled and went to the free-throw line for Lincoln County with 1:12 to play, and he hit one of two shots to tie it at 38-38.

GRC had one last shot to put the Patriots away, but the Cards’ star guard Jerone Morton’s 3-point attempt came up short, and the game went to overtime.

As the extra frame went into its final minute, GRC held a 46-42 lead with 28 seconds to play. That’s when Jaxon Smith took over for Lincoln County, hitting a jump shot at the 15-second mark to cut the lead to 46-44. GRC’s Aden Slone drew a foul with seven seconds to play and could have stretched the lead to three points, but his shot came off the rim and Jackson Sims was there to collect the rebound before GRC called a timeout.

Lincoln got the ball in bounds and back in Smith’s hands, and again he did not disappoint. Smith released a jump shot, and as it left his fingertips, the horn sounded. The shot found the bottom of the net, and the Patriots took the top team in the state to a second overtime period with the score tied at 46-46.

GRC scored four unanswered points and led 50-46 with 38 seconds remaining in the second extra period. Smith hit a jump shot to close the gap to 50-48. A pair of free throws for GRC’s Slone made it 52-48.

Alcorn came down the floor and took just four seconds to hit a 3-pointer, again pulling the cards to within one point at 52-51.

A quick foul by the Pats sent Slone back to the line, and again he sank both shots to make it 54-51 in favor of the Cardinals.

Lincoln had one last shot, and it was clear the ball would be in the hands of Jaxon Smith. With just one second on the clock, he got off a 3-point attempt, but this time the magic wasn’t meant to be, and Lincoln County fell 54-51.

Tramane Alcorn led the way with 19 points, and Smith was next with 14 for the Patriots. Ralston and Sims each added seven, and Clayton Davis chipped in four. Alcorn and Smith were each named to the all-tournament team.

Cardinals to what would be their second-lowest scoring output of the season.