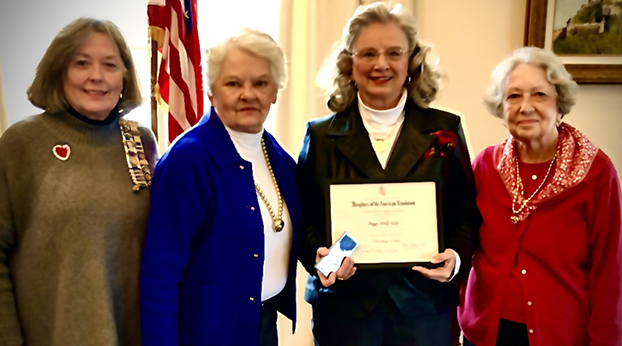 St. Asaph awarded the Excellence in Historic Preservation at the February meeting. Keeping in mind the audience we are writing for, please put it in the hard copy/ newspaper version of the Advocate. And please let me know that you received this email. Thank you for that.—Judy Sieweke

St. Asaph Chapter of the Daughters of American Revolution awarded the Excellence in Historic preservation Award to Peggy Ellis at their February 2022, luncheon meeting at the Danville Country Club.

Peggy and her husband Tom bought their circa 1820, Colonel Joseph McDowell house in 2001. After searching for years for an historic home in central Kentucky they settled on a beautiful brick home in the bluegrass countryside.

The one and one half story house is constructed with solid brick, thick walls and still has its original Federal floor plan as well as the original ash floors and handmade doors and trim. The bricks would have been made from clay dug and fired on the farm and the virgin timbers used for building the floor joists, rafters, floors and trim would have been harvested nearby. The stone foundation is of Kentucky limestone and reaches eight feet deep under the house to form a cellar.

The old house was built by Colonel Joseph McDowell on what had been a large land grant farm located in present day western Boyle County. At the time of building that area was part of Mercer County and had earlier been in Lincoln, one of the three original Kentucky counties.

Joseph was a brother to Ephraim and son of Samuel McDowell, leader of the Constitutional Conventions that led to Kentucky’s statehood in 1792. Col. Joseph was a farmer and on the first board of directors of the Kentucky School for the deaf when it was founded. McDowell was also an early member of the board of directors of Centre College. He died in Danville, Kentucky in 1856 and is buried with his wife Sarah in Bellevue Cemetery.

The Ellis’s have, over the last 20 years, worked on many projects to make their home mot only more comfortable, but also to retain its historic character. The house still retains the original six fireplaces, one for each of the original rooms, and they have all been put back into working order. A replica of a long gone early kitchen was reconstructed by Tom and is often used for hearth cooking demonstrations. Peggy and Tom have for many years collected early Kentucky furniture and appropriate accessories to represent the time period of 1790 to 1840.

Their efforts to preserve the historic value of their home and their collected artifacts has been a labor of love for the Ellis’s. St. Asaph applauds the Ellis’s dedication to the preservation of a small portion of our country’s heritage by presenting the Excellence in Historic Pressevation Award to them.

DAR is a service organization that has promoted historic preservation, education, and patriotism since 1890 nationally, and since 1900 locally.