What A Sad, Sad Day for Kentucky 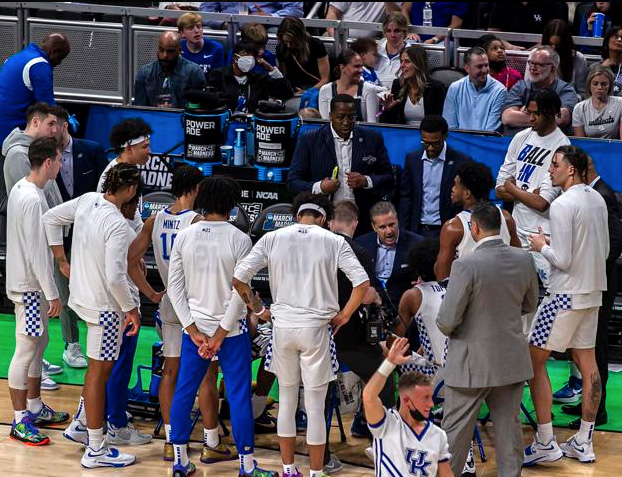 Once upon a time, Kentucky was a candidate for a top seed in its return to the NCAA Tournament for the first time in three years. That was all of a week ago.

That now feels like an eternity ago after the Wildcats fell to Saint Peter’s 85-79 in overtime during the first round of the NCAA Tournament on Thursday night. The Cats ended the postseason 1-2 and with back-to-back losses.

The program that made one-and-done famous was bringing new meaning to the phrase.

The loss to Tennessee in the SEC semifinals likely kept the Wildcats as a two seed instead of a coveted top seed. It turns out that may have mattered more than we thought although it shouldn’t have.

A month ago, maybe it would have happened. But for a team that struggled shooting the ball down the stretch, the stunning loss was inevitable although nobody saw it coming this soon. The Kentucky team that beat Kansas in Lawrence had reached its peak.

“Some of the things we were doing at a high-level large part of the season we were not doing as efficiently and as well,” veteran guard Kellan Grady said. “I think the biggest thing is we got away from guarding the way we were guarding at a high level.”

Considered Kentucky’s top outside shooter, Grady became mired in a slump at the wrong time. Grady had no answers for his shooting woes following his last collegiate game.

“If I could pinpoint it exactly, I wouldn’t have shot like crap,” he said. “… I feel bad that I couldn’t help in better fashion to help us win. It is what it is.”

For a team that was getting healthier, the ending came much sooner than expected. The Wildcats haven’t been to a Final Four in seven years now. This team seemed to have the experience needed to make a deep run in the tournament. Instead they fell victim to a well-prepared squad that lost to Rick Pitno’s Iona squad not once, but twice during the regular season. It took a magical run in the Metro Atlantic Athletic Conference to land the Peacocks, who were 12-11 at one point in the season, a spot in the tournament.

“We got injured and we never kind of went back (to the way we were),” Calipari said. “I may have been trying to coach a team that I coached a month ago. And we had some guys that weren’t playing like they were a month ago.”

Coming off a 9-16 season, the worst in Calipari’s tenure at Kentucky. He was trying something different, depending on graduate transfers and a mix of veterans and newcomers to put the program on the fast track to to its traditional standing as one of the bluebloods in college basketball.

Kentucky never regained the swagger it displayed when it reached the century mark in a win over Tennessee in January. They lost to the Volunteers a month later in Knoxville. Perhaps the biggest win of the year was an easier-than-expected win over Kansas in the Big 12-SEC Challenge on the last weekend of January. The Jayhawks progressed. Kentucky regressed.

“I (knew) they had never played in this stuff, was to get them free and loose, and we never got to that. Never,” he said. “And you know, even in timeouts, … We just didn’t do the things we normally have done. When you’re up (six) with three minutes to go, you figure out how to win the game. That’s your job as a coach. … we were trying to help them get through it. Obviously didn’t do the kind of job we needed to.”

Calipari hopes the loss doesn’t “take away from what these kids did.”

“This was really disappointing, devastating, “he said. “But this team brought a lot of joy to a lot of us. Just hate that it ends this way.”

KEITH TAYLOR is the sports editor for Kentucky Today. Reach him at Keith.taylor@kentuckytodaycom and via Twitter at keithtaylor21.

Magic finally runs out as Lincoln falls in state…