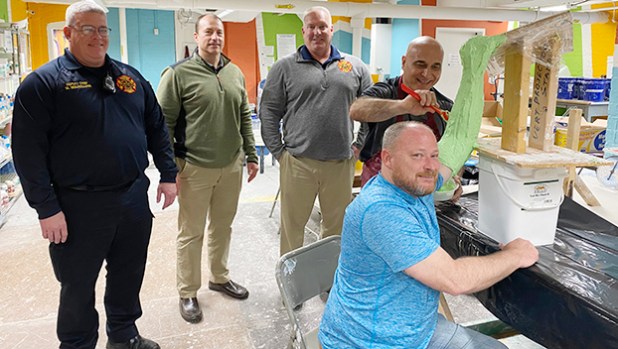 Aaron Rainwater of the Danville Police Department gets his arm cast for the Memorial Plaza Sculpture. - Photo by Mary Beth Murray. 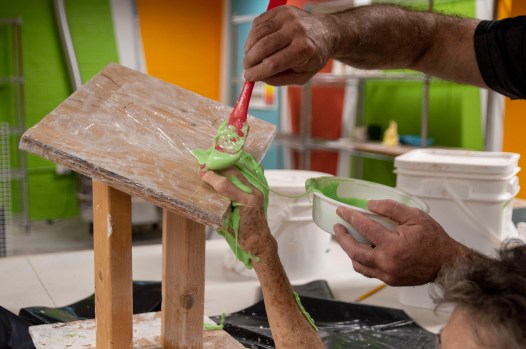 Guy Tedesco spreads self-releasing silicone rubber on the arms of participants whose arms will be cast in bronze. 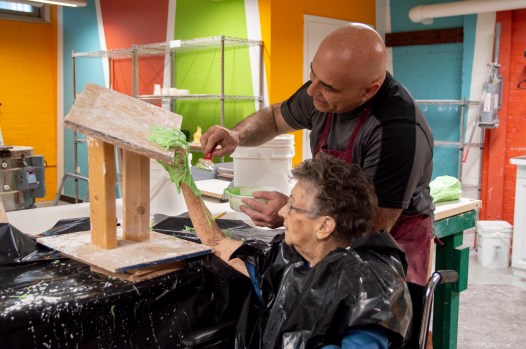 Ruth Ryan, who is 86 years old, gets her arm cast for the bronze sculpture by Guy Tedesco. 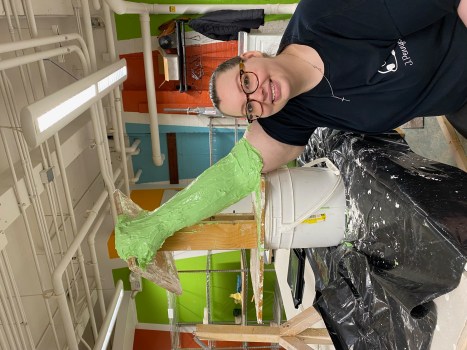 Jayla Pennycuff, who works at the 911 dispatch Center, gets her arm cast by Guy Tedesco at the arts center. Photo by Mary Beth Murray. 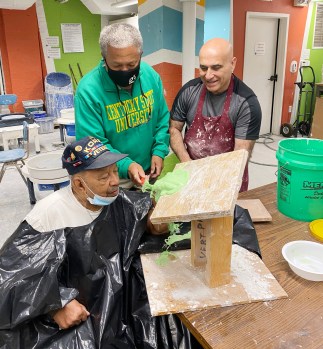 Albert Taylor, who had a family member die in the line of duty, gets his arm cast by Guy Tedesco at the arts center. - Photo by Mary Beth Murray. 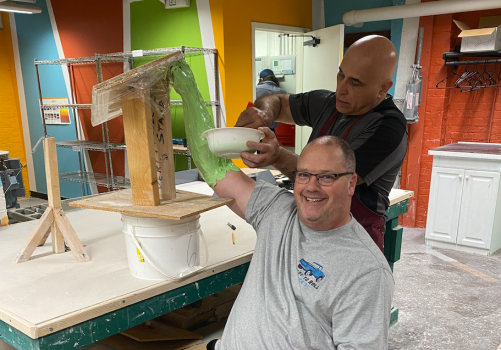 Greg Reams of the fire department 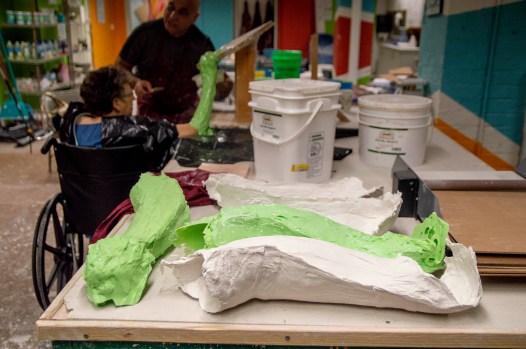 The sculpture will be in front of the new fire and rescue station in Danville to honor those who have served or sacrificed for the community. It utilizes a steel artifact from one of the towers of the World Trade Center destroyed on Sept. 11, 2001. 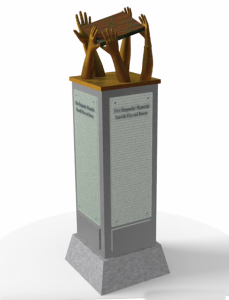 Artist rendering of what the sculpture will look like.

Five arms will be cast in bronze, and will be placed on a vertical monument. The arms will be reaching up and holding the square artifact. There will also be thumbprints in glass around the sculpture of first responders and others who have served the community.

Department heads also wanted some way to honor the namesakes of the previous fire building. Named the Ryan, Crum, Nelson building, after James Ryan, John Crum, and Levi Nelson, the three men died in the line of duty in Danville. City departments reached out to two remaining family members to have their arms cast.

One of them is Ruth Ryan, whose father-in-law James Ryan died as a police officer in 1968.  Sergeant James Ryan of the Danville Police Department was shot while responding to a burglary call on South Fourth Street.

He died at the hospital the next day, and the suspect was later acquitted. James had been working at the police department for 26 years, and was scheduled to retire two months after he was shot.

“I wanted something to honor these men who gave their lives for the city of Danville,” Ruth said. “They need something for kids to be educational to know what has happened in the city.”

The other is Albert Taylor, who is related to Levi Nelson. Nelson was a member of the black volunteer fire department.

While rushing to respond to a fire alarm, Nelson jumped on a fire engine as it was leaving the station, but he slipped and was run over by the engine. He died as a result of injuries at the age of 24 in 1938.

In making the arm molds, Tedesco used a self-releasing silicone rubber cast. He spread the thick, liquid rubber on the arms in three coats, which dried quickly. After putting plaster over the rubber, the molds slipped off participants’ arms.

The molds were able to contour details and the shape of people’s arms, which will transfer to the finished bronze products.

Tedesco said the sculpture will stand the test of time, as bronze lasts over 5,000 years.

“You can be rest assured in knowing that legacy is being honored for generations to come,” Tedesco said.

Tedesco chose this project because the 9/11 disaster is close to his heart. He lived and worked in New York City for seven years and traveled through the World Trade Center every day.

“As I watched the towers get hit and fall, it really moved me, and it felt like my own house was being destroyed,” Tedesco said.

“So to be able to give back to a community and be able to help a community express themselves, honor their own first responders, showing that these are families, not just individuals, these are generations of families, and it’s very important that we honor and recognize that.”

Tedesco has created numerous monumental metal sculptures, both in this country and in nine others, including the Vatican in Rome. He currently lives and practices just outside Louisville.

Note: This story was updated to include corrections and additional information about how participants were chosen for the arm casting.