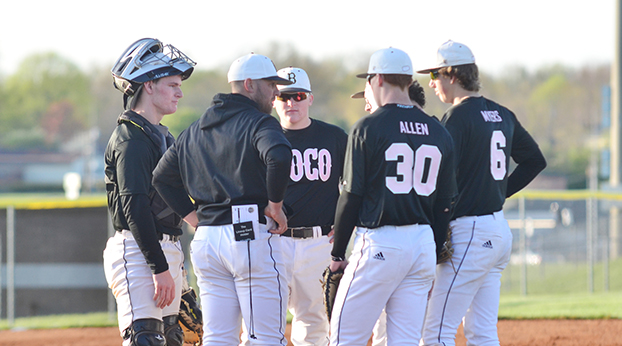 They will go far and wide to play good competition, but this week the Danville and Boyle County baseball teams only had to travel a couple of miles.

The two-game crosstown series gave both clubs an opportunity to test themselves against a quality opponent without taking a long bus ride.

Each team took one victory from the other this week. Danville won 10-5 at Boyle on Tuesday, and Boyle won 7-6 at Danville on Wednesday.

The Rebels and Admirals were expected to be among the top teams in the 12th Region this season, and that has proved to be true almost two-thirds of the way through the nine-week regular season. 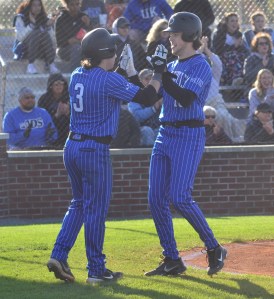 Logan Smothers, right, and Preston Barnes of Danville celebrate after both scored on a single by Jack Simpson during the second inning Tuesday. – Photo by Mike Marsee

Between them, they have eight games scheduled against teams currently ranked in the statewide coaches’ poll. However, the crosstown rivalry, a home-and-home series that has been scheduled on consecutive days since 2018, prepares both teams for the postseason in a way few other games can.

The competition is good, the atmosphere is charged and the games feel a little more like they’ll feel in late May.

“It’s helping us for region,” Boyle coach Adam Blair said. “Hopefully we get to go to region; that’s the goal for all four of us (in the 45th District). And this only prepares us for moving on to region and having that chance to go to the state tournament.”

Danville (14-4, 3-1 district) had won six straight games over Boyle (12-5, 3-1) before the Rebels’ victory Wednesday, but Danville coach Paul Morse said the rivalry is alive and well.

“It’s great. We love that it’s a good rivalry game, and this is the kind of team you’ve got to beat to win a district title, a region title, a state tournament,” Morse said.

“You’ve got to play good teams and get in those pressure situations. To have to perform in those (situations) can only help you be better come the end of the year.”

No. 5 Danville didn’t perform up to its standard Tuesday, but the Admirals overcame their four errors with 12 hits.

The big blows included a bases-loaded triple by Brady Morse that capped a four-run fourth inning and gave Danville a 6-2 lead,

Two-run home runs by Logan Smothers in the fifth inning and Blake Shelton in the seventh broke the game open, giving the Admirals a 10-4 lead.

Smothers went 3 for 3 and scored four runs, Morse was 2 for 3 and Shelton was 2 for 4 with three RBIs. 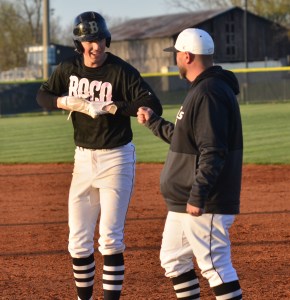 Kason Myers of Boyle County is congratulated by first base coach Adam Shartzer after Myers singled to lead off the fifth inning Tuesday. – Photo by Mike Marsee

Kason Myers went 3 for 4 with two doubles and two RBIs for Boyle, and Luke Gaffney had a two-run home run.

Blair was disappointed but not discouraged after Boyle’s loss.

“Tomorrow we could be the team that hits three or four home runs. You never know,” he said.

The Rebels didn’t do that Wednesday, but they did get some big hits, including a two-run double by Blake Russell in the top of the first inning and two more home runs by Gaffney.

Gaffney smacked two-run homers in the second and seventh innings as part of a 3-for-4 day, while Russell went 2 for 3 with two RBIs and Sage Dawson went 2 for 4 for Boyle.

Hon starred on the mound for Boyle, striking out 10 batters over 6 2/3 innings to keep the Admirals at bay.

Baxter went 3 for 4 for Danville, and his three-run homer in the seventh inning pulled the Admirals within a run before Boyle’s Brayson Claunch got the final out. K.J. Stanfield went 2 for 3 with a solo homer in the first inning and two RBIs.

The Admirals and Rebels are on pace to claim the top two seeds for next month’s 45th District Tournament at Danville — they are currently tied for first place in the district standings, and the first tiebreaker is runs allowed in district play — which would put them on a collision course to play for the district title for the 12th time in 17 seasons.