“We are so glad to be back open and it was great to see so many familiar faces,” manager Beth Marlowe said about Blue Bird Market’s grand opening at 512 S. Fourth St.

Saturday’s event went well, she said, but lines were long and messed a little with the overall flow inside the new location. “So, we have a few things to fix.”

The non-profit Blue Bird sells vintage and other second-hand items at fair prices, and is known to be a place to spot creative finds. Items are donated and all proceeds support Wilderness Trace Child Development Center (WTCDC).

WTCDC is an early educational center that works with children of diverse abilities, ages 2 through 5. The center blends speech, occupational and physical therapies in a preschool program. Blue Bird was created as a funding source for the center.

The market has been a mainstay in Danville for the last decade, but over the last couple of years, it’s had to do some hopping around. After leaving its original space in a building off the bypass in 2020, due to safety concerns and having no heat or air, it moved into a suite in the Greenleaf Shopping Center on Lexington Avenue.

But then the owners sold the unit, and they moved out in January 2022.

The biggest impact in this most recent move is that “we’ve had to downsize a lot,” which will affect how they accept drop-off donations, and handle pick-up. Its original location offered 27,000 square feet, enough to have a showroom for sales as well as storage room for donations they could keep ahold of.

“This space is 3,300 square feet,” Marlowe said, adding that they are very happy and thankful to have even found it. But downsizing takes some intense organization. Blue Bird would previously take just about any donation of goods, and the items they didn’t deal in would be farmed out to other agencies that could use them, like blankets to the Humane Society, for example.

But in the new location, the nonprofit brought nothing with it. “We didn’t bring a single thing to this new place, except our shelving.” The market donated items from their previous location to shelters after the tornados hit in western Kentucky, but now it’s on its way to getting stocked back up, Marlowe said, because of its amazing supporters.

“But we have zero storage space, so we can’t take any cloth items — that includes no comforters, blankets, curtains, things like this.”

They will still take things like decorative pillows that sell, and anyone questioning a donation can contact Marlowe.

The new location, situated across from the Salvation Army and next to Danville Church of God, will accept donations from 10 a.m. to 1 p.m. on Tuesdays and Thursdays.

“Typically, we think of these as ‘in our car’ donations,” Marlowe said, where drivers pull up to drop items off. “But if it’s a truckload, we’ll need to plan that with them.”

Pick-ups can still be scheduled, which are done by a group of Blue Bird volunteers every Tuesday morning. 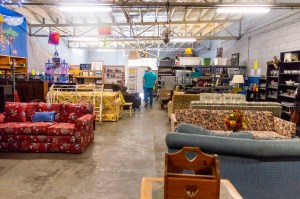 Shop with a purpose

“Saturdays are for shopping,” Marlowe said, with the market open 10 a.m.-1 p.m., and now joining in on the fun with the Third Thursday events in Danville. “Since we’re closer to downtown now, we’ll be open each third Thursday from 5-8 p.m.” in the summer.

Marlowe said the market has Christmas items all year long, and finds like Bybee Pottery and depression glass. “You never know what you’ll find at Blue Bird Market … right now, we have a side-by-side fridge and a washer and dryer …”

When Marlowe first began with the nonprofit seven years ago, it was pulling in up to $69,000. “The goal was $100,000, and I worked by behind off trying to reach that. It took us three years, but we got there.”

And last year at Greenleaf (the suite had a line out around the corner, down to the bowling alley the day it opened …) Blue Bird was able to bring in $150,000, which Marlowe said was crazy — in the best possible way. It helped since the market was closed for four months due to moving.

“But, that was when we had so much space, and could take a huge amount of donations. I’m a bit worried now, since we don’t have the inventory space.”

Years ago, Blue Bird was created to be “the icing on the cake of WTCDC,” Marlowe said. “Then Blue Bird became a big chunk of the cake, when their funding changed and a lot of cutbacks affected them.” And the market became vital as a support stream.

Libby Suttles, WTCDC’s executive director, said the market’s consistent revenue stream helps maintain early education and therapeutic services “for exceptional children in our communities,” and that “philanthropy is the backbone of the center.”

Without donations, its services would be eliminated. The center’s grand funding has been greatly reduced over the years, she said, and they haven’t been able to hold the annual fundraising event in recent years due to the pandemic.

Suttles said the center has been celebrating Blue Bird Market’s grand opening, “in hopes that people will continue to make miracles happen at WTCDC,” and that hundreds of children from local neighborhoods have relied on its services over the past 43 years.

“The people who donate, shop or volunteer at Blue Bird created a community that loves our children and families. We truly would not be able to serve children without the proceeds generated by Blue Bird,” Suttles said. “We hope everyone continues to shop with a purpose.”

• To schedule donation drop-offs or pick-ups with Blue Bird Market, call (859) 516-1193. Manager Beth Marlowe said it’s helpful when scheduling a pick-up to also text a picture of the items along with the address.

• Overflow parking has been graciously allowed in the Church of God lot next door, but shoppers must steer clear of other businesses’ lots around the market.