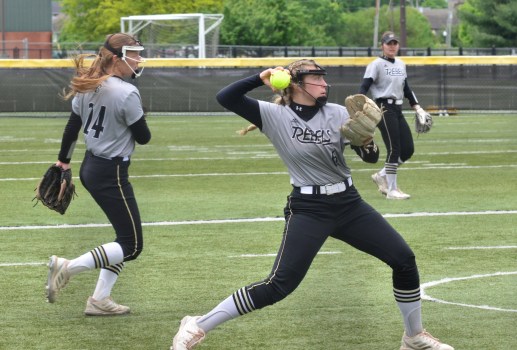 Boyle County third baseman Ella Coffey throws to first base after fielding a bunt during the Rebels’ win over Boyd County on May 7. Photo by Mike Marsee. 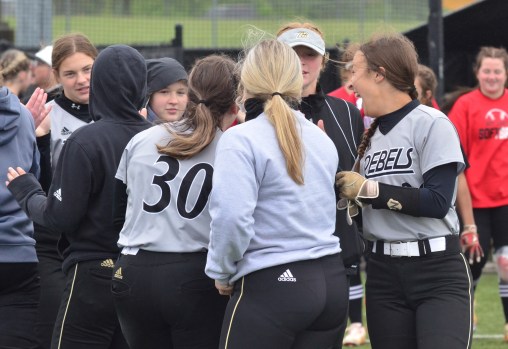 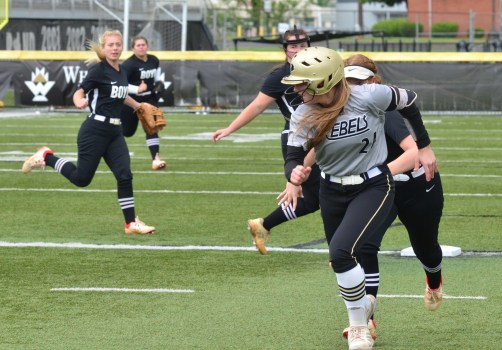 Kayleigh White of Boyle County tries to outrun Boyd County second baseman 13 after getting caught in a rundown during the Rebels’ win over Boyd County on May 7. Photo by Mike Marsee. 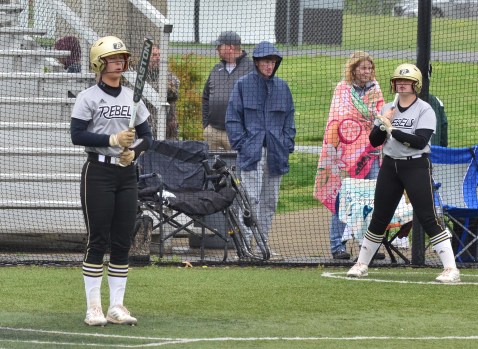 Kennedy Qualls, left, prepares to step into the batter’s box as teammate Madison Luttrell looks on from the on-deck circle Saturday during the Rebels’ win over Boyd County. Qualls and Luttrell are the Rebels’ only seniors. Photo by Mike Marsee.

Every team is different, and this year’s Boyle County softball team is certainly different than last year’s.

The goals remain the same, but the lineup has changed and the leadership has changed as the Rebels ready themselves for another run at regional and state tournament success.

The work continues after seven weeks of a nine-week regular season, but coach Brian Deem said the team is getting close to where it should be as the postseason approaches.

“The dynamics always change regardless of how many kids you have returning,” Deem said. “But we’ve spent a good portion of our year mixing things up, trying people, getting them ready, and we’re starting to figure out our groove and our rotation. And I think we’ve got that set, so now we’re just out here getting reps and trying to get ourselves prepared for the postseason.”

Boyle lost six seniors, including four starters, from the 2021 team that went 28-7 and reached the quarterfinals of the state tournament.

There are only two seniors on this year’s roster, but they are backed by a class of nine juniors and some talented underclassmen, all of whom have combined to craft another successful season.

The Rebels were 16-9 after going 1-1 Saturday in their own round-robin event at Rebel Stadium, and they are at No. 16 in the current statewide coaches’ poll. They defeated Boyd County 11-1 in five innings, then lost to No. 5 Greenwood 3-1.

“Over the year, I think we’ve really come together and become a really good family,” senior outfielder Kennedy Qualls said. “We all get along really well, and we just have really good team chemistry, and I think that really helps whenever we’re on the field executing and doing our thing.”

That chemistry is decidedly different than it was a year ago, though it’s just as good in its own way. First baseman Madison Luttrell, the team’s other senior, said the vibe in the dugout has changed.

“We’re more positive,” Luttrell said. “If someone was to mess up, instead of being like, ‘Hey, do this,’ it’s like, ‘Hey, you’re OK, but just make sure you’re doing this.’ There’s a lot more positivity.”

“Both seniors are kind of that mother figure, so to speak,” he said.

He said their leadership is made stronger by the “followship” by the rest of the roster.

“Something I learned a long time ago from (former Boyle football) coach (Chuck) Smith is that seniors are great, but you’ve got to have great followship as well,” Deem said. “For the most part we’ve gotten really good followship from our kids … so that’s really taken a lot of the burden off the seniors from having to be a little bit more rigid.”

It has also led to a more laid back dugout, something that has required adjustment from the often fiery coach.

“I’m dealing with it,” Deem said. “But kids have changed, and I understand that. We’re doing what’s best for the kids.

“I could be a little more intense with them than I can with this group, so I’m being smart on when to show that intensity and when to try to maintain my patience.”

Between the lines, the greatest improvement has come on defense.

“Our defense has improved tremendously,” Luttrell said. “We got it all together, and we’re really starting to execute good there.”

There have been lineup adjustments along the way as Deem and his staff have worked to find the right combination, and Qualls said there has also been the development of trust that often comes as players learn each other.

“As the year’s gone on we’ve really gotten together and really started to trust each other more, and that just made our defense really come together,” she said.

The offense is in place. Boyle scored its 200th run Saturday — more than all but one team in the 12th Region — and averages eight runs per game. Summer Ray is the team’s top hitter with a .471 batting average, followed by Kayleigh White at .459.

The Rebels rank fifth in the state in home runs with 32 in 25 games, led by Ray and Courtney Sandy with eight homers each, White with seven and Lauren Tipton with six.

White is the most experienced of the team’s three pitchers with a 3.99 earned-run average in 17 appearances.

Seven players had multi-hit games as the Rebels battered Boyd with 17 hits, led by Katie Qualls with three hits. Luttrell, Ray and Kennedy Qualls had the only hits against Greenwood.

The games were part of the Tylar Missbach Memorial Showcase, which Boyle hosts annually to honor a 2014 Boyle graduate and former player who died in an auto accident in October 2015.

“We’ve been honoring her for about six years now,” Deem said. “I told the kids today, ‘This isn’t about you all today, and this isn’t about the program, this is about Tyler and her time here with us.”

Boyle played three home games last week after playing its previous 12 on other fields. The Rebels have played only eight times this season on their own turf.

“It’s good to be back at home,” Luttrell said.

Boyle is playing a typically tough schedule, and all of its losses to Kentucky schools have been to teams that were ranked in the top 20.

“It’s let us see a lot of top-tier competition that we need to see to get us prepared for regions and state, and it really helps us bring out character, too, within ourselves,” Luttrell said.

The Rebels have played nine games against teams ranked 30th or better and have three remaining. They played at No. 27 Great Crossing on Monday, they are at No. 14 Central Hardin on Wednesday and they are at No. 7 Anderson County on May 16.

“I think it challenges us mentally, but I think that’s a good challenge,” Kennedy Qualls said.

Deem said it’s all about preparing for the challenges of the postseason.

“I want our kids to have that mentality of anybody, anywhere,” he said. “There’s going to be days you take some on the chin, but we’re going to learn from it and get ourselves ready for May.”

Of course, playing Boyle also presents a challenge for its opponents.

Boyle has won the last four 12th Region championships and will be the regional favorite again this season. If the Rebels win the 45th District Tournament at Lincoln County, they will host the regional.

The Rebels know the bull’s-eye on their backs is only getting bigger, but they don’t mind.