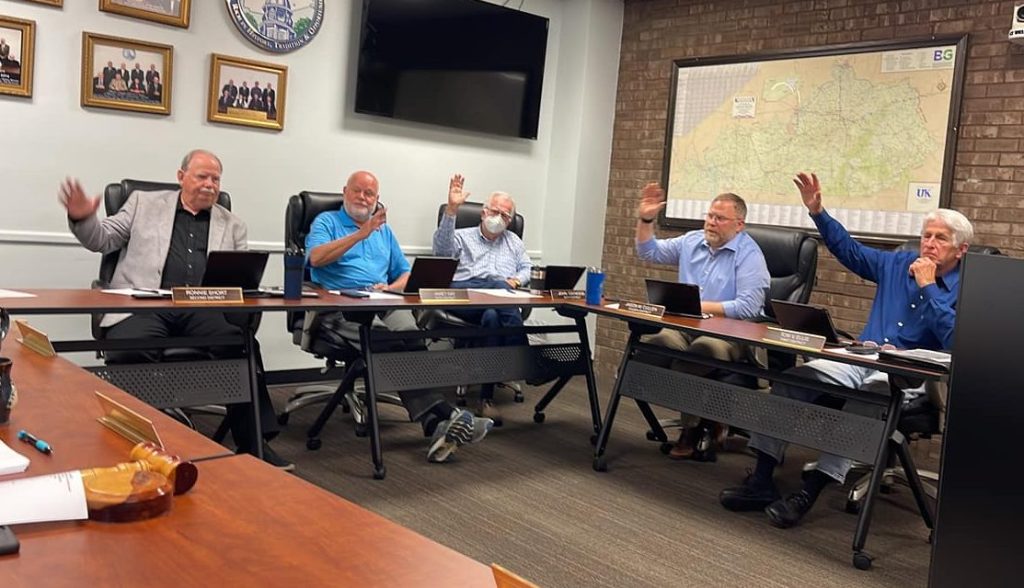 Fiscal Court voting to fund the newly formed Economic Development Authority. The Court approved $200,000, which will be held in reserve and appropriated as the agency progresses. Photo from Fiscal Court Facebook page.

The EDA was formed in 2021 as a joint effort between Boyle County and the City of Danville. Former Centre College President John Roush was named chairman and president of the EDA in October 2021. David Williams, president of Burkman Nutrition, was named as the county’s “at-large” member.

The EDA was founded mainly to purchase land for economic development. Members have been meeting since the beginning of this year to better form the group and its plans.

While the EDA was meant to take over some efforts of the EDP, magistrates had differing opinions on the defunding of EDP.

EDP members have worked to bring businesses to Danville, and Magistrate Jamie Gay said he believes they have been successful.

According to the EDP’s website, Danville has been consistently ranked in the top 1-3 micropolitan cities in Kentucky for economic development projects by Site Selection Magazine for about 10 years.

Magistrate Jason Cullen said he believes the EDP has not been successful.

“I’m not comfortable putting taxpayer dollars out there on an organization that has not produced,” Cullen said. “It’s great to bring a restaurant in every now and then but you need good-paying jobs.”

Cullen cited housing affordability, low-paying jobs and median household income as areas that the county needs to improve on.

Gay disagreed with Cullen in how the EDP has operated.

“All the citizens that serve on that board are interested in moving our community forward in a positive way and work hard at doing that in a positive way, and give up a lot of time and a lot of money to make that happen,” Gay said.

The county’s tentative plans are to phase out the EDP, but decisions on its future have not been made.

The vote to give $0 to EDP passed by four to two, with Gay and Magistrate Ronnie Short voting against it.

Magistrates also had differing understandings of how the EDA would operate. Discussions on the functions of EDA are ongoing, and will be presented to the court in a future meeting.

The court voted unanimously to fund the EDA in quarterly increments of $50,000 when the group is fully formed and functional.

The court passed the second reading of changes to the county’s ethics ordinance. Boyle County Attorney Chris Herron had noticed that the ethics ordinance was outdated, which was originally passed in 1994. He said it lacked substance and clear processes like how to file a complaint.

The ordinance now states that county workers are allowed to have signs on their car and park it in the courthouse parking lot while on official business. They are not allowed to keep it parked at the courthouse for purposes of displaying the signs while not on duty.

Other topics that the ordinance changes cover are personal behavior and conduct, and clear processes for filing a complaint and how the Ethics Commission handles complaints.