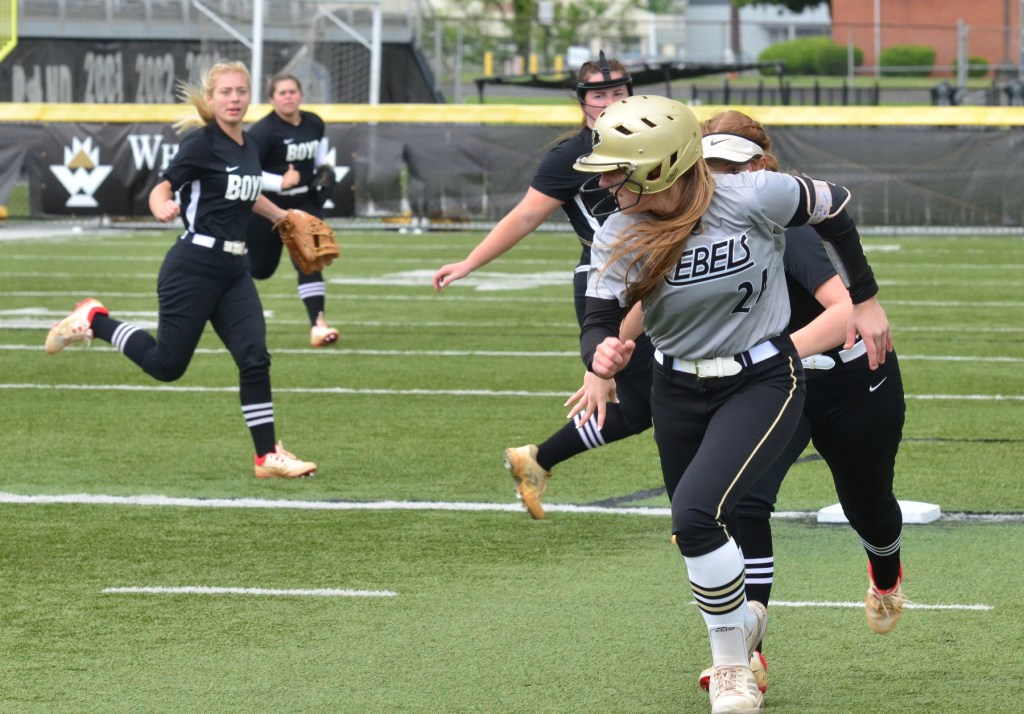 Kayleigh White of Boyle County tries to outrun Boyd County second baseman 13 after getting caught in a rundown during the Rebels’ win over Boyd County on May 7. Photo by Mike Marsee.

Kayleigh White earned her second pitching win in as many nights, following up a four-inning no-hitter in the first round with a two-hitter in the title game.

The victory gives No. 16 Boyle (23-9) the opportunity to defend its 12th Region championship on its home field. The 45th District champion is designated to host the regional tournament.

White was named the most valuable player of the district tournament after striking out 25 batters and allowing only two hits and no walks in 11 innings over two games.

Boyle, which has won nine of the past 10 45th District titles, hit .449 (22 for 49) in two tournament games — exactly 100 points better than its season average entering Tuesday’s game — and had four home runs to add to its single-season school record that now stands at 43.

Courtney Sandy went 3 for 3 at the plate against Garrard, and Summer Ray had a third-inning home run, her third of the tournament and her 14th of the season.

White had four of Boyle’s 13 hits and she and Ray drove in five runs each in the four-inning win over Danville.

Ray hit a solo home run and a grand slam and White had a game-ending two-run homer in the Lady Rebels’ 10-run fourth inning.

The 12th Region Tournament is expected to be played Saturday through Monday at Rebel Stadium. Pairings will be drawn Thursday.