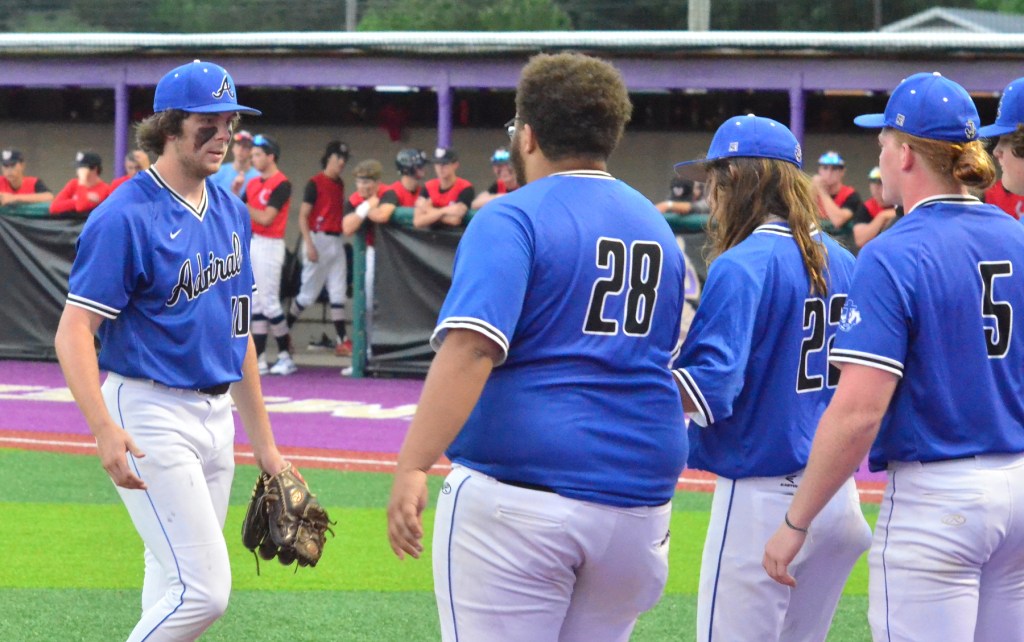 Logan Smothers, left, is greeted by teammates as he leaves the mound during the seventh inning of the 12th Region Tournament championship Wednesday. Smothers pitched 6 2/3 innings to earn the win in the Admirals’ 5-2 victory. Photo by Mike Marsee.

For the second straight year, Paul Morse believes he has one of the top teams in the state baseball tournament. These days, however, it’s a little more crowded at the top.

The Danville coach said unlike last year, when his team was on a very short list of teams who could truly win it all, the Admirals will be part of a full field of championship contenders when the state tourney opens Thursday in Lexington.

“We felt like last year there were really three teams that legitimately had a shot to win it from a talent standpoint,” Morse said. “This year there’s not that one team that stands out. There are 16 teams, and they’ve all got a shot. Whoever made it there legitimately has a shot.”

No. 7 Danville (30-8) will take its shot in a first-round game against Boyd County at 10 a.m. Thursday at Kentucky Proud Park.

Few of their opponents will be able to match their level of experience, and that could be where they have an edge. Five players who were in the starting lineup last season returned for a Danville team now led by nine seniors.

“A team with some experience, that’s been there before, that’s going to go a long way,” Morse said.

Boyd is devoid of state tournament experience, though it is a familiar brand in postseason baseball.

“Boyd County is a very good team that has been playing very well down the stretch,” Morse said.

The Lions allowed only half as many runs per game during their last 22 games (3.0) as in their first 12 games (6.0), and they have given up only four runs in five postseason games.

Sophomore Jacob Vanover pitched a three-hit shutout in their semifinal win over Raceland, and senior Jake Biggs threw a four-hit shutout against Rowan County in the title game. Morse said he expects one of them to start Thursday’s game.

“Both are very good pitchers who have put up really good numbers this year,” Morse said.

Boyd is led at the plate and in the field by senior shortstop Luke Preston, who is hitting .477.

Baxter leads the Admirals’ offense with a .487 batting average and 11 home runs, while Morse is hitting .480 with six homers.

Both Danville and Boyd are averaging about 8 1/2 runs per game, and Danville’s team batting average of .336 is only three points better than Boyd’s. But while the Admirals have the highest home run total in the state with 50 longballs in 38 games, the Lions have only 13 homers in 34 games.

The Boyd-Danville winner will play a quarterfinal game at 10 a.m. Saturday against the winner of Thursday’s DeSales-Woodford County game. The semifinals and finals will be played next weekend.

The tournament field also includes No. 1 McCracken County, No. 3 St. Xavier, No. 5 Owensboro Catholic, No. 6 Beechwood, No. 13 Madison Central, No. 17 Russell County and No. 23 Corbin. No. 21 Central Hardin was playing in the lone remaining regional final Monday.