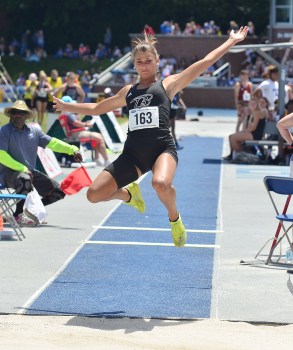 Molly Wise of Boyle County leaps Friday during the Class 2A girls long jump at the state track and field championships. Wise won the triple jump and long jump. Photo by Mike Marsee 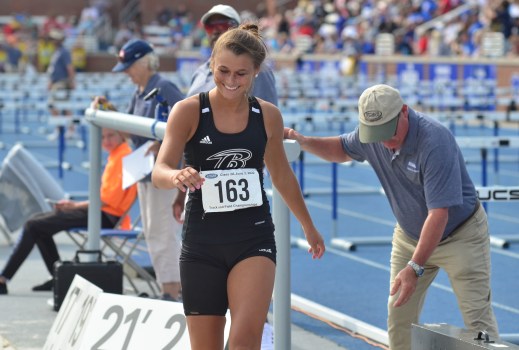 Molly Wise of Boyle County smiles as she walks away after a fall following an attempt Friday in the Class 2A girls triple jump at the state track and field championships. Wise won the triple jump and long jump. Photo by Mike Marsee. 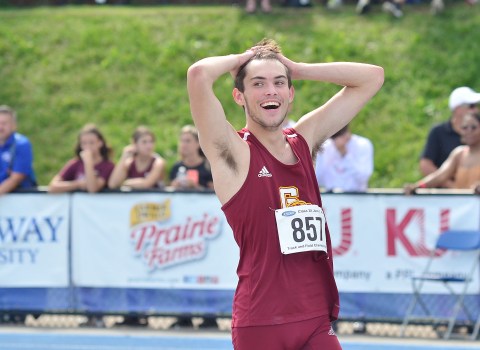 Chase Burkhart of Garrard County reacts after clearing the bar at a personal-best 6 feet, 8 inches Friday in the Class 2A boys high jump at the state track and field championships. Burkhart won the event, becoming the first Garrard boy to win a state title. Photo by Mike Marsee 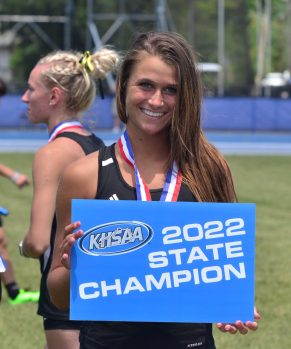 Molly Wise of Boyle County poses on the awards stand Friday at the state track and field championships. Wise won the Class 2A girls triple jump and long jump. Photo by Mike Marsee.

LEXINGTON – Molly Wise had a winning smile, but that grin did not tell the whole story.

As the Boyle County graduate posed twice on the awards stand with a gold medal and a sign that said “2022 State Champion,” she knew she could have been standing somewhere else on the podium — or somewhere else entirely.

The Boyle County graduate won the Class 2A girls long jump and triple jump titles Friday at the state track and field championships at UK, finishing on top at the end of a season in which she nearly hit bottom twice.

“It means everything,” Wise said. “This season has just been ups and downs the whole way through, and I’m extremely thrilled and very grateful to everybody that’s helped me along the way with the whole journey.”

After taking up track and field as a junior and making a splash in the sand pits in her first season, Wise was expected to contend for championships in both of the horizontal jumps this spring.

She won indoor state championships in both events earlier this year, but a hamstring injury and an ankle injury hampered her early in the outdoor season, and a midseason auto accident nearly did much more damage.

“Every time one of those setbacks hits, that’s the first thing that comes to mind, that this may not be the outcome,” Wise said.

“I’m over the moon right now, actually, so extremely excited,” she said.

The most surprising of those results might have been in the triple jump, given what transpired since Wise’s accident about a month ago.

She came away with an injury to her right leg and some scrapes and bruises from the wreck that sent her car to the junkyard, but she didn’t realize at first how that leg injury would affect her jumps.

The pain in her right leg, her takeoff leg in both jumps, was affecting her, especially in the triple jump.

“It was just too much impact,” Wise said. “The first phase of triple is really rough with all that speed behind it.”

“It just took a lot of practice, a lot of repetition over and over and over on that leg,” she said. “I would definitely give a lot of credit to my coaches, my trainers, my physical therapist. They’re all wonderful, and they all helped me get back to where I am now.”

Wise, who signed with the University of Richmond earlier this year, said each of her championships was meaningful in its own way.

“The long was really special, because there were some really great competitors today. But triple, just reworking everything the past couple weeks, I’m really happy with how it turned out,” she said.

Three other local athletes each won state championships for the first time Friday, and Mercer County swept both the boys and girls team titles with 94 and 81 1/2 points, respectively.

Germani Crosby of Lincoln County, an eighth-grader, won the girls shot put by just more than 3 feet with a throw that was about 8 feet better than her top throw a year ago.

“My goal last year when I started throwing was just to get the hang of it,” Crosby said. “My goal (this year) was to hit a mark and then press on from that mark.”

Junior Cooper Brummett won the boys discus for Boyle, winning by about 8 feet after finishing sixth in 2021.

Another junior, Andrew Hardwick, nearly won the boys shot put before his best competitive throw of the season was bested by 3 inches by Mercer County’s Lleyton Penn.

“I feel like there was still more in me, but I was fine with that being my final throw of the year,” Hardwick said.