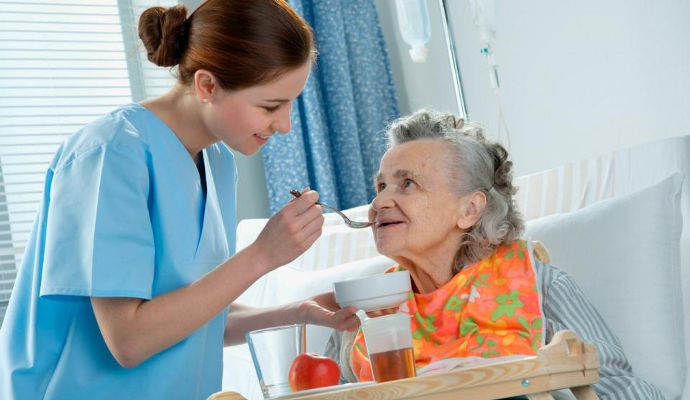 Healthcare facilities are facing a critical shortage of nurses and other staff. Ancora Home Care photo

“Our regional hospital systems have thousands of well-paying career opportunities ready for hire today. These positions provide stable income and excellent benefits. But most of these available positions in Eastern Kentucky hospital systems are remaining unfilled after weeks, months — even years,” says the report. “To compound the issue, hospitals are seeing record turnover rates, thus creating even more demand for trained medical professionals.”

The SOAR report says the region’s turnover rates in vital health-care roles are statistically at or above the national turnover rate of 19.5%. In 2021 it was 24.6%. It says health-care jobs are responsible for 17.6% of Eastern Kentucky’s economy, more than any other industry in the region.

“If we can’t fill these open health-care roles, our Eastern Kentucky hospital systems are at immediate risk of reducing, downgrading, or eliminating critical services,” says the report. “The impacts would be devastating — and cannot be understated.”

The president of the Kentucky Hospital Association, gave a similar report about nursing shortages across the state at the July 20 meeting of the legislature’s Interim Health, Welfare and Family Services Committee.

“The bottom line for hospitals is that our costs are skyrocketing, health care workers are retiring in large numbers and not enough people are entering into the health professions to meet the growing need,” Nancy Galvagni said. “The crisis, as you all know, has been in the making for a while; Covid-19 exacerbated it; and of course, there is no quick fix.”

The SOAR report says the personnel shortages are due to many of the same factors that the KHA survey found: “Burnout from understaffing during the pandemic, staff retiring or quitting at record rates, and staff such as RN’s choosing to leave and travel for more competitive pay.”

SOAR also says rural areas have been hit the hardest because of a lack of educational infrastructure to train a health-care workforce.

Noting a recently completed KHA workforce-shortage survey that included nearly every Kentucky hospital, Galvagni said there is a shortage of 5,391 registered nurses and licensed practical nurses in the state’s hospitals and that the shortage is most acute for nurses working in medical surgical unites, which are reporting a 30% vacancy rate.

Added to the challenge, she said hospitals continue to rely on travel nurses to staff hospital units, which “come at a national rate of pay” because Kentucky hospitals are competing with wealthier states for the same labor pool.

“The amount of money our hospitals are spending on travel nurses and premium pay, which is higher wages paid to your existing staff, is growing exponentially, and it is jaw-dropping,” she said.

Galvagni said the survey found that in 2019, Kentucky hospitals spent $88 million on nursing contract labor, and in the first six months of 2022, that number “skyrocketed” to $489 million, an increase of 455%.

In the same period, she said, premium nursing pay, for nurses regularly on hospital payrolls, went from $50 million to $185 million, a 269% increase .

Galvagni said that while federal programs have helped to meet these enormous costs, “The staffing costs are not sustainable.”

She said the solution must go beyond simply enrolling more students; they must also take and pass the required National Council Licensure Examination to practice. She said 5,067 Kentucky students enrolled in associate degree and bachelor degree nursing programs in 2019-20, but only 3,211 took the NCLEX in 2021, and not all passed.

Galvagni said more than 18% of hospital nurses are expected to retire over the next 10 years and that that number is even higher for psychiatric nurses (36%) and in recovery-care nurses (28%).

“With more experienced nurses retiring, fewer entering the workforce and an aging population, the stress on the health-care system is going to demand creative solutions,” she said.

A call to action

“This would allow students to enter the workforce immediately and then further advance their career through additional training,” she said.

In its call to action, SOAR offers detailed steps for a number of stakeholders, including educators, educational institutions, state and federal legislators, health-care industry leaders and Eastern Kentucky residents.

“We can trigger a positive domino effect if we all come together across health care, government, education, and Eastern Kentucky communities,” says the report.

Sen. Ralph Alvarado, co-chair of the interim health committee and a physician, said the issue of  health-care worker shortages will likely be “front and center” during the next legislative session.

And with a word of caution, he described what health care could look like if we don’t address this issue, noting that as we start to see health-care professionals exit the workforce at a rate higher than replacement, Kentuckians will see a delay in care, even for risky conditions.

“We don’t necessarily have the right to someone else’s labor. . . And there’s a lot of people out there that have these abilities that are saying, I’m done. I’ve had enough,” said Alvarado, R-Winchester. “We’ve relied on the goodwill of a lot of these folks to make this system work, and that goodwill is quickly escaping us.”

Sarah Ladd of the Louisville Courier Journal recently wrote  about the mental-health challenges of nurses, reporting that at least 58 Kentucky nurses have died by suicide from 2016 to 2021, according to Delanor Manson, CEO of the Kentucky Nurses Association.

“Because we have a nursing shortage . . . mental well-being is decreasing,” Manson told Ladd. “And then that leads to more people leaving the profession or leaving their job. And it also makes it challenging to recruit people to go to nursing school.”

Efforts to address the nursing shortage

State officials have tried to address the nursing shortage. Gov. Andy Beshear declared an emergency in mid-December, allowing the state to take special measures to educate and license more nurses.

His order required the nursing board to approve requests for enrollment increases if a school has sufficient resources; requires schools to report vacant student seats to the board monthly to post online, and send the board a list of needed faculty; allows a school to open new campuses more quickly; and improves reciprocity with other states.

The legislature passed a bill that lifted enrollment limits for nursing programs, allowed more flexibility in nursing instructors’ qualifications, helped out-of-state and foreign-trained nurses practice in the state without compromising standards of care, and set term limits and geographic requirements for the Board of Nursing.

Manson wrote in an op-ed that the legislature needed to approve $100 million to provide direct help to the nursing profession, including raises for nursing faculty and bonus pay incentives to keep nurses on the job. Instead, the General Assembly approved $10 million for a bipartisan Healthcare Workforce Collaborative between Kentucky’s education and healthcare industries aimed at expanding health care workers in the state.

Health-care worker shortages are plaguing the nation, with no end in sight, especially as the BA.5 Omicron subvariant drives cases, hospital admissions and deaths up, Krista Mahr reports for Politico. Nationwide, she reports that “as of July 22, hospitals in nearly 40 states have reported critical staffing shortages, while hospitals in all 50 states said they expect to be short-staffed within a week.”

Further, she writes that the current wave of Covid-19 hospitalizations, which have risen more than 40% in the last month, is also putting fresh stress on facilities at a time when the pandemic response is running out.

“There is growing concern that this money has run out,” Nancy Foster, vice president for quality and patient safety policy at the American Hospital Association, told Politico. “It’s not really getting sufficient attention.”

Hospital administrators told Mahr that they expect these chronic hospital staffing shortages to continue, especially with the continued spread of Covid-19, a vaccine that prevents serious illness but doesn’t keep everyone out of the hospital, continuing resistance to mitigation measures and an unwillingness to ring the alarm bell during a wave where fewer people are getting seriously ill and dying, compared to previous waves.