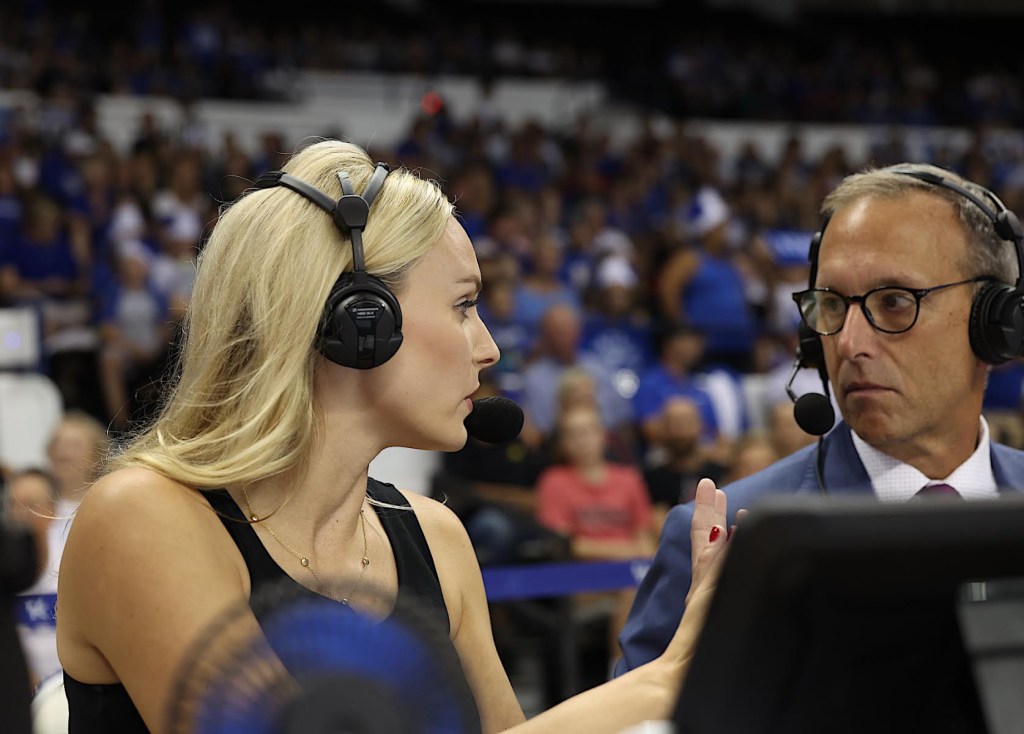 She was the 2015 Atlantic Coast Conference Player, Setter and Scholar-Athlete of the Year and helped Louisville volleyball win three conference championships. Now she works for ESPN and the ACC Network as a sideline reporter/analyst.

She was in Memorial Coliseum last week when almost 4,000 fans saw No. 3 Louisville beat then No. 13 Kentucky in a five-set, three-hour match that was shown on ESPN — only the fourth collegiate women’s volleyball match on ESPN since 1997 and the first for both Kentucky and Louisville.

“I think it is a huge night. I was thrilled when I  saw this match get elevated (to ESPN),” said George after the match. “I love this rivalry match. With the success of both programs of late I knew it would be a very impressive match and more importantly it put on display what so many college coaches and players have been wanting to showcase.”

George, who was the Milwaukee Bucks’ team sideline reporter for the 2018-19 season, knows ESPN has shown the national semifinals and title match. However, she believes the Kentucky-Louisville matchup showed the nation what goes on during the regular season.

“There are unbelievable matchups in non-conference and then when you get into conference play. It was great to be able to showcase that early in the season for everyone to see,” she said.

George believes ESPN2 is also a significant venue for college volleyball but says there is something special about ESPN — and college coaches agree.

“Everyone has that channel (ESPN) memorized on their remote. People are always flipping to see what is on. ESPN just draws in a bigger audience than other platforms,” George said.

“We have so many volleyball matches on television and should, but to have a premier slot like that (for Kentucky-Louisville) makes all the difference in the world. I was getting tweets from random fans saying they had never watched a college volleyball match in their life and stuck around because these girls are  incredible.

“They are not only unbelievable athletes but the physicality we saw from these two teams I think was really special.”

George was on one end of the press table working as an ESPN analyst. On the other end was former UK All-American Leah Edmond as the UK Radio Network analyst — the same role she had for Sunday’s game with Nebraska.

“It was awesome to see Leah on the broadcast as well. A tremendous player and certainly a good voice to set the tone for Kentucky,” George said. “I thought that it was awesome to have the broadcast from all angles for everybody who wanted to keep up with the match either on television or radio. Just another plus for volleyball.”

She felt the same way about so many former Kentucky high school players being on the court for the two teams. Kentucky sophomore setter Eleanor Beavin played at Louisville Mercy. Reserves Audrey Whitworth of Breckinridge County, Lane Jenkins of Lexington Lafayette and Kelly Franxman of Covington Scott.

Alexa Hendricks and Anna DeBeer, both of Louisville Assumption, and Elena Scott of Louisville Mercy are all key players for the Cardinals and coach Dani Kelly

“I think that is what is unique. Kentucky is a hotbed for volleyball,” George said. “The club training, the high school training is excellent. It breeds high level talent and I love when girls stay in state and play.

Kentucky won the 2020 national championship. Louisville reached the Final Four last year. Could one, or both, teams be in the Final Four this season?

“I think so. That was some high level volleyball. Louisville lost two All-Americans but they have been able to fill those holes to a degree. Kentucky, I think, is so physical. When you are averaging 15 kills per set it is so nasty,” George,

“I think if both teams can remain healthy through these non-conference schedules, then iron sharpens iron. The gauntlet that Kentucky is going through, they are only going to be better once they get to December.

“These coaches both do a really good job from a scheduling standpoint. They both get really high RPI’s when it comes to the postseason and that  allows them to host (first round NCAA Tournament games) and that really matters. That allows you to kick start what could be a deep run that we have seen both of these teams go on the last two years and either one could do it again this year.”

Kentucky had almost 4,000 fans in Memorial Coliseum again Sunday when it was swept by No. 2 Nebraska.

“Kentucky is still learning what works and what doesn’t work. They have good players and we all know Craig Skinner is a great coach. It is just taking them a little longer to figure things out this year but a lot of teams would have some setbacks playing the schedule they have,” George said.