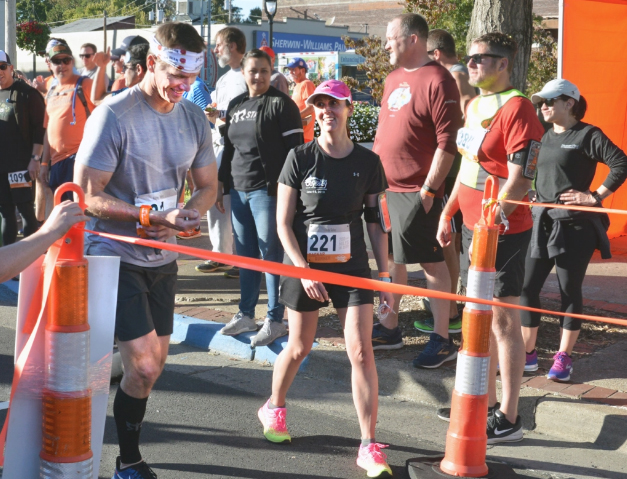 The Bourbon Chase will come through Danville on Friday. Advocate-Messenger file photo

The annual Bourbon Chase relay race will bring around 4,500 runners to Perryville and Danville on Friday, Sept. 30 and they’ll find a warm welcome waiting for them.

Teams from across the country will start the race that morning at the Jim Beam Distillery in Clermont and cover more than 200 miles along their route to the finish line in Lexington. Boyle County is fortunate enough to have several exchange points along the way, including Weisiger Park in downtown Danville, where most of the runners will stop for dinner and a short period of rest.

“We expect to begin seeing some of the 750 vans used by the runners downtown by mid-afternoon on Friday,” said Kendall Clinton, executive director of the Danville-Boyle County Convention and Visitors Bureau. “Main Street between 4th and 2nd streets, as well as 3rd street from the parking garage to Main, will be closed beginning at 5:30 p.m. so tables and chairs, food trucks, a DJ and other activities can be set up for the runners. While many of those in the vans will be arriving earlier, the first runners on foot are expected to show up downtown around 8 p.m., with other runners coming through over the next three hours or so.”

Downtown will be busy with activity throughout the evening and local residents are invited to come and take part. The Art Center of the Bluegrass will be staying open until 8 p.m. and The Curry Kitchen food truck will set up in their parking lot. Most downtown restaurants and retail shops will also be open late. Two additional food trucks – The Still and Smoke Shack BBQ – will set up on Main Street to help feed runners. Hey Mista DJ will be playing music at Weisiger Park from 6-11 p.m. and the Wilderness Amateur Radio Club will set up at Central Kentucky Federal Savings Bank to report on runner positions as called in by spotters between Wilderness Trail and downtown.

“This is a great opportunity for Danville to shine,” Clinton said. “Bourbon Chase participants are coming from around the country and we have a short amount of time to make a lasting impression in hopes that they’ll want to return when they have more time to visit and enjoy our community.”