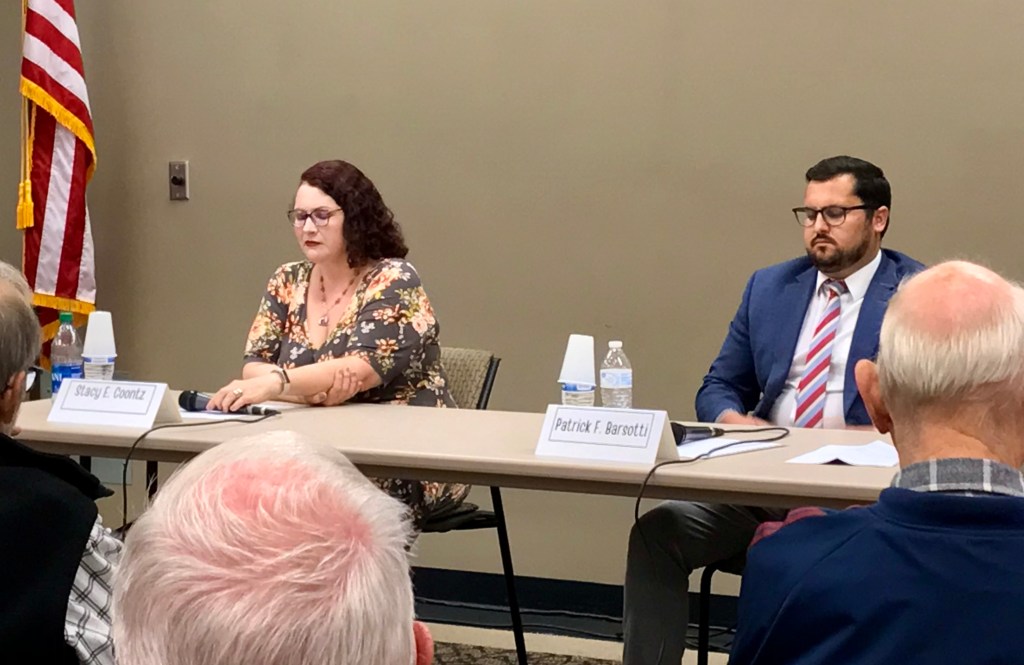 The two candidates for district judge in Boyle and Mercer Counties had an opportunity to answer questions from the public at a forum on Tuesday.

The forum was put on by the Boyle Justice Advocates with help from the Chamber of Commerce and Hometown Radio Network. The event was live streamed on the Hometown Live Facebook page and Youtube channel, and ckytv.net on ckytv 2. For those who would like to watch the whole forum, click here.

The candidates are Stacy E. Coontz and Patrick F. Barsotti for the 50th Judicial District.

Coontz is a 1993 Boyle County High School graduate. She got a bachelor’s degree in political science and journalism from UK, and got her Juris Doctor from UK Law School in 2000. She was a public defender for the U.S. District Court Eastern District for 16 years, then worked at Helton Law Office from 2017 to 2022. She was appointed District Judge for the 50th district earlier this year.

She said she has represented people charged with everything from reckless driving to capital murder, and was a juvenile specialist for 14 years.

“Juvenile court is one of my passions; it’s a place where I believe we can be very effective and help people,” she said.

Barsotti graduated from Boyle County High School in 2007, then graduated from Centre College with a bachelor’s in biochemistry and molecular biology in 2011. He got his Juris Doctor from UK College of Law in 2015. He served as assistant commonwealth attorney in Ohio County from 2015 to 2017. He came back to Boyle County in 2017 for private practice with a focus on criminal defense. He is currently Assistant Boyle County Attorney.

“I’ve defended individuals and I’ve also prosecuted them as well, and I think that gives me a unique ability to understand what a fair result is in the court of law, and what a just outcome is considering the case,” Barsotti said.

Candidates had the opportunity to explain what happens in district court and why people should care. They both said that most people who have to go to court go to district court.

Both candidates responded to the question of whether they are open to considering alternative forms of treatment for people with drug and/or mental health problems, rather than simply incarceration.

Barsotti said he is open to other forms of treatment.

“We do have an issue with drugs and alcohol and mental health issues, and a lot of times those two issues coincide with one another, and it’s commonly referred to as dual diagnosis situations,” Barsotti said.

He continued, “I think that a judge has an obligation to consider all possible sentencing options when looking at how to handle a specific case. They’ve got to consider the circumstances, how they got there, what’s going on with them; but at the end of the day I think there’s also a time and place for incarceration and utilizing the jail.”

Barsotti said the jail now offers in-patient services, and the county attorney’s office has routinely allowed offenders to serve sentences in the in-patient treatment, and utilizes the Rocket Docket program.

“There’s some benefit to utilizing the resources in our community to try to address these issues, but we also have to make sure that the primary focus is that our roads and community remain safe,” Barsotti said.

Coontz said she is also open to having alternative sentencing options and other forms of treatment.

“When I was a public defender and when I was in private practice, I put together plans so those folks could get some treatment,” Coontz said. “The past few months I’ve been on the bench I’ve signed several orders to let people go get treatment, either through custody, or we release them to go to treatment, or as a condition of some kind of probation, or as a condition of an alternative sentencing plan.”

She said the Shepherds House in Boyle County and throughout the state is one of best places for people with substance use disorders to get treatment, and that the court should continue utilizing it.

“I hope that I always come down on the side of making sure everybody’s safe, not just the community but the person as well, whether that’s incarceration or treatment or an alternative to detention plan, I will review all of those,” Coontz said.

Another question they answered is what they believe is the best way to handle juvenile cases.

Coontz, who was a juvenile specialist for 14 years, said the best program they’ve ever had was in Boyle juvenile court through what was then Comp Care and now New Vista. She explained it was a grant-funded program called the Juvenile Coordination Program, but the grant ceased in 2019 and the program stopped.

“The Juvenile Coordination Program was a wonderful way to make sure kids stayed out of trouble,” Coontz said. “It was a project that worked as a group. The family went to therapy, the kids went to therapy, they got drug treatment, they got mental health treatment … the school system worked with the kids to make sure there were no further problems.”

Coontz said she has spoken with the people at New Vista and they have the money back, and can get the program running again. She said it had an 80 to 85 percent success rate, and that she wants it back along with teen court.

Barsotti agreed with Coontz, saying the most important thing to do for kids is get involved with helping them.

“It takes a village to raise a child, and that starts in our schools, and carries over to our courts when appropriate,” Barsotti said. “I would also support seeing the expansion of juvenile programs to help make sure juveniles are educated, so they understand the consequences of their actions.”

When asked what their best characteristics are that would make them good district judges, Coontz said that she cares about people.

“I have the experience that’s necessary, I’ve been practicing law for 22 years, and I genuinely care about people,” Coontz said. “I want every person in Boyle and Mercer counties to feel when they come before me that they have been heard.”

She continued, “I care about what happens to everybody who comes in the courtroom, whether it’s a criminal defendant, or somebody in a small claims case, and I think that’s one of my best characteristics is that I do care about people.”

Barsotti said he also has the appropriate leadership capabilities to get the job done in an efficient way.

Candidates also answered questions involving ethics of the district judge and how they would deal with any ethical dilemmas, among other topics. To watch the full forum, click the link at the top of this article.